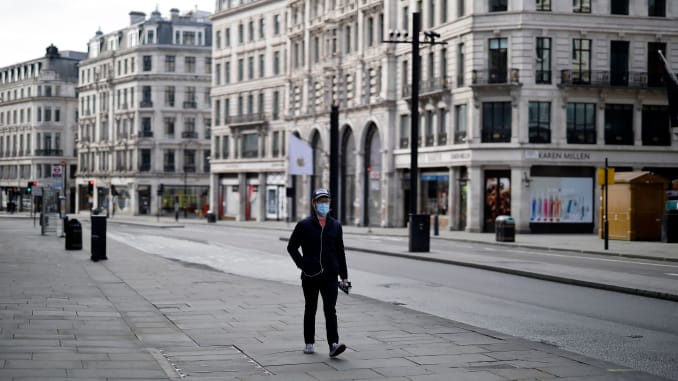 Lockdown restrictions in the UK will continue for “at least” another three weeks as it tackles the coronavirus outbreak, Dominic Raab has said.

The foreign secretary told the daily No 10 briefing that a review had concluded relaxing the measures now would risk harming public health and the economy.

“We still don’t have the infection rate down as far as we need to,” he said.

It comes as the UK recorded another 861 coronavirus deaths in hospital, taking the total to 13,729.

Strict limits on daily life – such as requiring people to stay at home, shutting many businesses and preventing gatherings of more than two people – were introduced on 23 March, as the government tried to limit the spread of coronavirus.

Ministers are required by law to assess whether the rules are working, based on expert advice, every three weeks.

Mr Raab, deputising for Prime Minister Boris Johnson as he recovers from the illness, said: “There is light at the end of the tunnel but we are now at both a delicate and a dangerous stage in this pandemic.

“If we rush to relax the measures that we have in place we would risk wasting all the sacrifices and all the progress that has been made.

Mr Raab said the review concluded that the measures were working, but there was evidence the infection was spreading in hospitals and care homes.

He said five conditions needed to be met before the lockdown was eased:

Making sure the NHS could cope
A “sustained and consistent” fall in the daily death rate
Reliable data showing the rate of infection was decreasing to “manageable levels”
Ensuring the supply of tests and Personal Protective Equipment (PPE) could meet future demand
Being confident any adjustments would not risk a second peak
He said he could not provide a definitive timeline, but said the prime minister’s warning at the outset of the epidemic that it would take about three months to come through the peak still applied.

“We know it is rough going. Every time I come to this lectern and read out the grim toll, I walk away and think of their sons and daughters going through this right now, their brothers, sisters, grandchildren, all those left behind,” Mr Raab said.

“It makes this government focus even harder on what we must do and I know together, united, we must keep up this national effort.”

‘Way out is staggered, gradual and cautious’

It isn’t a surprise. But it is hugely significant for every single person in this country. The lockdown measures will go on for at least another three weeks.

Ministers from devolved administrations across the UK have agreed that as a united way forward. The PM’s deputy, Dominic Raab, said that we’ve sacrificed too much to ease up now.

And while ministers in Westminster have been very reluctant to talk about a future exit strategy – for fear it could distract from its core “stay at home” message – the foreign secretary did nod to how we could, in future, see measures relaxed in some areas while potentially strengthening them in others.

That may not sound like a lot of detail but it is possible to start tentatively piecing this exit strategy puzzle together. It’s important to say things could change as more information comes to light.

But, as things stand, it seems that the route out of this will be staggered, gradual and cautious.

The government’s clear and ongoing priority will be to avoid overwhelming the NHS. Increased testing will be an essential part of tackling the infection. And meanwhile the country, and indeed the world, waits for what appears to be the ultimate way out – a vaccine.

With Labour calling on the government to publish plans for easing the lockdown, Mr Raab said they were being as “open as we responsibly can” but they could not “prejudge” the evidence that their scientific advisers would consider at the next review in three weeks’ time.

Labour leader Sir Keir Starmer said “the government is right” to extend the restrictions but said any exit strategy would require mass testing in the community and it was “struggling” to reach its target of 100,000 tests a day by the end of April.

The UK now has the capacity to carry out 35,000 tests for coronavirus a day, Downing Street said, although the most recent figures showed they only carried out 18,665 in the last 24-hour period.

Also speaking at the briefing, Sir Patrick Vallance, the government’s chief scientific adviser, played down suggestions that vulnerable groups such as the elderly could be kept under lockdown conditions for longer.

He said the aim was for “everything to start moving more towards normal, not to segregate certain groups”.

‘Too early to change course’
The government’s announcement in the UK comes after a meeting of the emergency Cobra committee, involving the first ministers of Northern Ireland, Wales and Scotland.

In Scotland, a further 80 people have died in hospitals. First Minister Nicola Sturgeon said the lockdown should continue because “we are not confident enough that the virus has been suppressed sufficiently”.

Wales recorded another 32 deaths, with First Minister Mark Drakeford saying it was “still too early to change course”.

Northern Ireland saw its highest daily toll, with a further 18 deaths in hospitals, and England recorded another 740 deaths.

The tallies for individual nations can differ from the UK-wide total, because they are calculated on a different timeframe.

At 20:00 BST for the fourth week running, people across the country gathered on doorsteps, balconies or in gardens to applaud workers in the NHS, care services and others helping during the crisis. 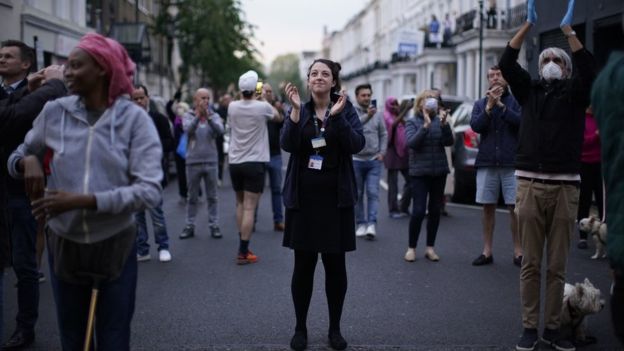 “It got really big, eh?” said Annemarie Plas, a Dutch woman living in London who began the weekly Clap for Carers ritual. “You can never say British people don’t have passion and spirit.”

Downing Street said Boris Johnson, who continues to recover from Covid-19, joined in the applause to thank the “incredible efforts” of NHS and care workers.

Call for mask-wearing
During the No 10 briefing, Prof Chris Whitty, the UK’s chief medical adviser, urged people to continue to attend hospital if they needed to for other emergencies, saying the NHS “is open for business”.

It comes after figures showed that visits to accident and emergency units have dropped sharply since the outbreak began.

Prof Whitty also said the government was reviewing whether there were any circumstances in which it should recommend people wear masks in public to prevent the virus spreading, but said “the evidence is weak” and it would be a “very bad thing” if increased demand created shortages for healthcare workers.

But London Mayor Sadiq Khan told the BBC he wanted people in the capital to wear masks or face coverings whenever they leave the house.

“The evidence around the world is that this is effective, and I’m lobbying our government, our advisers to change their advice, and I want us to do that sooner rather than later,” he said.

Following reports that black, Asian and minority ethnic people were critically ill in disproportionately high numbers, Downing Street said the NHS and Public Health England would carry out a review into whether some ethnicities were particularly at risk from the virus.

Prof Whitty said that it was “absolutely critical” to determine which groups were most at risk, but said the evidence on ethnicity was “less clear” at the moment than other factors, such as age, sex and underlying illnesses.

Some countries across Europe which introduced lockdown measures before the UK are now beginning to ease them, including Austria, Italy and Germany.

However, they continue to require some social distancing measures, which reduce close contact between people and prevent large gatherings.

Police have issued guidelines on “reasonable excuses” to be out in the lockdown, which warn against long rests on park benches or buying paint supplies to redecorate the house
Captain Tom Moore, the 99-year-old war veteran and fundraiser for NHS charities, has raised a total of more than £16m
Coronavirus-related scams have cost people more than £2m, with experts warning they are spreading as fast as the virus itself
Plans to allow some Parliamentary business to take place via Zoom video-conferencing have been approved
Firefighters in Wales says arsonists are trying to cause “as much chaos as possible” by starting forest fires during the pandemic