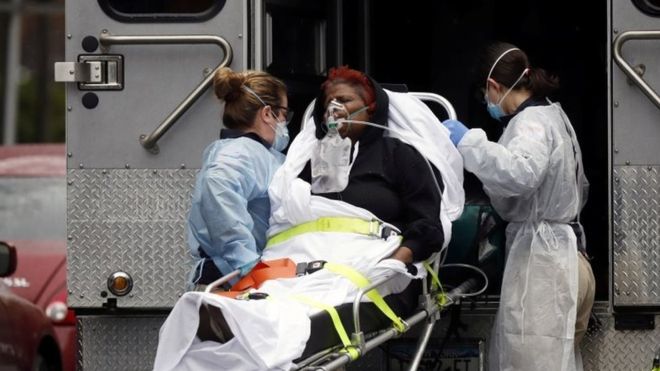 The death toll from the coronavirus pandemic in the US has gone above 5,000, while confirmed cases worldwide are close to reaching one million.

There were 884 deaths in the US in 24 hours, a new record, according to Johns Hopkins University, which has tracked virus figures globally.

The latest victims include a six-week-old baby. More than 216,000 are now infected, the world’s highest figure.

Reserves of protective equipment and medical supplies are almost exhausted.

This has left the federal government and individual US states competing for safety gear, while the unprecedented demand has led to profiteering, officials in the Department for Homeland Security were quoted by the Washington Post as saying.

The Trump administration says it can acquire adequate supplies, and has $16bn (£13bn) available to do so. State and local officials have complained about insufficient protective equipment such as masks and gowns as well as ventilators, needed to help keep patients breathing.

Meanwhile, US Vice-President Mike Pence warned the US appeared to be on a similar trajectory as Italy where the death toll has exceeded 13,000 – the worst in the world.

The number of confirmed infections across the US rose by more than 25,000 in one day. The worst-hit place is New York City, where nearly 47,500 people have tested positive and more than 1,300 have died.

Officials say as many as 240,000 people could die in the US from Covid-19 – the disease caused by the virus – even with the mitigation measures in place. In Connecticut, a six-week-old baby has died from coronavirus, believed to be America’s youngest victim of the virus so far.

What is happening in New York?
Queens, New York City’s second-most populous borough, has the highest number of confirmed cases and deaths. The area is home to a large population of low-income workers employed by the service sector who live in close proximity, and social-distancing guidelines are hard to enforce.

“While we are practising as a city, social distancing, you may have multiple families living in a very small apartment. And so it’s easy to understand why there’s a lot of transmission of Covid occurring,” said Dr Mitchell Katz, head of New York City Health + Hospitals.

The city needed 2.1 million surgical masks, 100,000 surgical gowns and 400 ventilators, among other items, by Sunday, said Mayor Bill de Blasio, who has warned that April would be worse than March as the outbreak gathered pace. He said the goal was to triple the number of hospital beds, to 65,000.

“This will be an epic process through the month of April. It’s herculean, but I believe it can be reached,” he said on Twitter.

Sobering pictures from the city have shown bodies being loaded onto refrigerated mortuary lorries outside hospitals.

What is happening elsewhere in the US?
Other clusters are flaring up in places like Detroit. In New Orleans, Ellis Marsalis Jr, a jazz pianist, teacher and father of musicians Branford and Wynton Marsalis, became the latest high-profile figure to die from complications caused by Covid-19. He was 85.

Marsalis spent most of his career in his native New Orleans, and released more than 15 albums. “Ellis Marsalis was a legend. He was the prototype of what we mean when we talk about New Orleans jazz,” said Mayor LaToya Cantrell.

Florida, Georgia and Mississippi have become the latest US states to issue lockdown orders. More than 75% of the country’s population are now under orders to stay at home.

In Florida, Governor Ron DeSantis softened his stance banning two cruise ships hit with coronavirus from docking in the state. He had been adamant that the ships should not land passengers at Fort Lauderdale, but now said the decision was up to the local authorities.

A staunch ally of President Trump, the governor faced pressure from the president on Wednesday to relent. He said he had understood the passengers were all foreigners, mainly Canadians and British, and did not realise that US citizens were also aboard.

What is happening elsewhere?
In the UK, the Wimbledon tennis tournament has been cancelled for the first time since World War Two
British government officials vowed to ramp up testing within weeks, as the number of deaths in the UK saw its big daily increase – 563
Canada’s Prime Minister Justin Trudeau has promised the largest economic programme in the country’s history
The official death toll in Iran has passed 3,000 while in Spain more than 9,000 have died