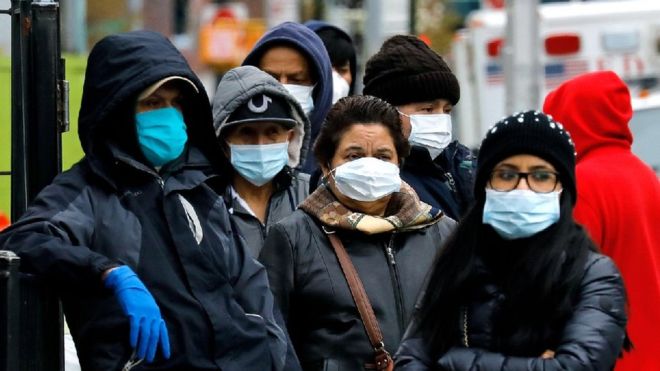 The White House is expected soon to advise Americans living in coronavirus hotspots to wear cloth masks or scarves in public to help stop the spread of the coronavirus.

President Donald Trump said “I don’t think it will be mandatory – if people want to wear them, they can”.

Residents of New York, the outbreak’s epicentre in the US, have been urged to cover their faces in public, but not to use surgical masks.

New York City is the worst-hit area, with 1,562 deaths in the pandemic, Johns Hopkins University reports in its daily global tally.

Both the US Centers for Disease Control (CDC) and the World Health Organization (WHO) are reassessing their guidance on face masks, as experts race to find ways to fight the highly contagious virus.

Covid-19 is carried in airborne droplets from people coughing or sneezing, but there is some dispute about how far people should distance themselves from each other.

The WHO advises that ordinary face masks are only effective if combined with careful hand-washing and social-distancing, and so far it does not recommend them generally for healthy people.

But on Thursday New York mayor Bill de Blasio urged all New Yorkers to cover their faces when outside and near others.

“It doesn’t need to be a professional surgical mask. In fact, we don’t want you to use the kind of masks that our first responders need.”

Dr Deborah Birx, one of President Trump’s coronavirus advisers, expressed caution about general mask-wearing. “We don’t want people to get an artificial sense of protection,” she said. “They’re an additive.”

Hospitals and morgues in New York are struggling to cope with the pandemic.

An emergency field hospital now stands in Central Park, and another makeshift hospital is to be set up in the city’s Javits Center, a conference venue.

Most states in the US have issued “stay-at-home” orders, putting more than 75% of Americans under lockdown.

More than a million cases of coronavirus have been registered globally, according to Johns Hopkins University.

In other developments:
Spain’s official death toll is 932 for the past 24 hours – just below Thursday’s figure. Spain, with 10,932 deaths so far, is the worst-hit country after Italy for fatalities
The commander of the USS Theodore Roosevelt was dismissed after saying the US Navy was not doing enough to halt a coronavirus outbreak on board the aircraft carrier
The Zaandam cruise ship, with dozens of ill passengers on board, docked in Florida after several South American countries refused to accept it
The World Bank approved a plan to disburse $160bn (£130bn) in emergency aid over 15 months to help countries stricken by the pandemic
The French authorities have boosted police checks to prevent anyone trying to go on holiday this weekend ahead of Easter
UK Health Secretary Matt Hancock said the aim was 100,000 tests a day in England by the end of April amid criticism of the government’s plans
A 4,000-bed emergency field hospital at London’s ExCel centre is due to open later on Friday

New York Governor Andrew Cuomo has warned that New York risks running out of ventilators for patients in six days.

The White House has ordered car firms to switch rapidly to ventilator production.