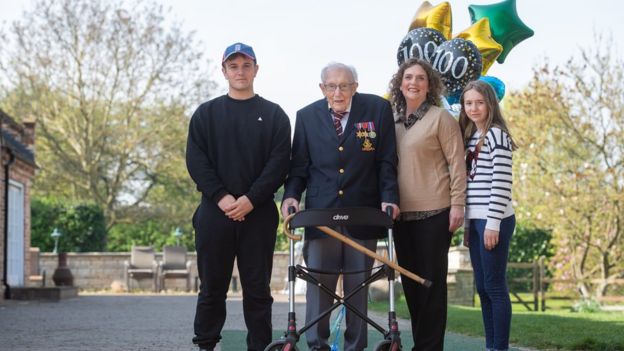 A 99-year-old war veteran has walked 100 laps of his garden to raise £17m and counting for the NHS.

Captain Tom Moore originally aimed to raise just £1,000 for NHS Charities Together by completing laps of his garden before his 100th birthday.

But he has smashed his target after nearly 800,000 people made donations to his fundraising page.

As he finished the challenge earlier, he said: “I feel fine, I hope you’re all feeling fine too.”

Capt Tom told the BBC the total amount raised so far was “an absolutely fantastic sum of money”.

“I never dreamt I would be involved in such an occasion as this,” he said at the end of his final lap.

On Friday morning, Capt Tom’s JustGiving page, which temporarily crashed after he finished the challenge nearly 24 hours earlier, was showing donations of more than £17m.

The total includes an undisclosed donation from the Duke of Cambridge, who also wrote to the World War Two veteran.

Capt Tom’s daughter Hannah Ingram-Moore said: “We are absolutely floored by what has been achieved but we’re so happy, so humbled and so proud.

“He’s a beacon of hope in dark times and I think we all need something like this to believe in and it’s for such an amazing cause.”

His granddaughter, Georgia, added she was “very proud” of him.

Capt Tom began raising funds to thank the “magnificent” NHS staff who helped him with treatment for cancer and a broken hip.

With the aid of a walking frame, he completed 100 laps of the 25-metre (82ft) loop in his garden in Marston Moretaine, Bedfordshire, in 10-lap chunks well before his birthday on 30 April.

Tributes and messages of congratulations have poured in from politicians, celebrities and NHS workers, while a petition for him to receive a knighthood has been signed by more than 300,000 people so far.

Downing Street said Prime Minister Boris Johnson would “certainly be looking at ways to recognise” him.

“It would be marvellous to have such an honour but I don’t expect anything like that,” Capt Tom said.

A spokesman for Mr Johnson said Capt Tom had “captured the heart of the nation with his heroic efforts” and raised an “incredible amount” of money.

Chancellor Rishi Sunak said what he had done was “extraordinary” and “showed that the British spirit was as strong as it’s ever been”.

Brig Andrew Jackson, colonel of the Yorkshire Regiment, described Capt Tom as “an absolute legend” who came from “an exceptional generation that are still an inspiration for our Yorkshire soldiers today”.

Celebrity judge Judy Sheindlin described the 99-year-old as “remarkable” while former F1 champion Damon Hill congratulated him on the “brilliant idea and for pulling it off”.

‘It will all be right’
Nurses on Ward 4 at the Royal University Hospital said: “Thank you so much for all your efforts and how much money you’ve raised for the NHS.”

Capt Tom also received a special message from actor and singer Michael Ball, who described the challenge as “an extraordinary achievement” and sang “You’ll Never Walk Alone” to him live on BBC Breakfast. 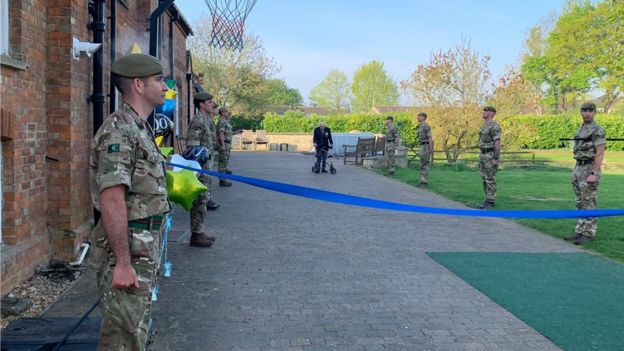 Shortly after he finished the fundraiser, the retired soldier had words of advice for the nation about coping with the coronavirus lockdown.

“You’ve all got to remember that we will get through it in the end, it will all be right,” he said.

“For all those people finding it difficult at the moment, the sun will shine on you again and the clouds will go away.”

More than 700,000 people from around the world have donated money to the fundraising page since it was set up last week.

Capt Tom, who is originally from Keighley in West Yorkshire, trained as a civil engineer before enlisting in the Army for World War Two, rising to captain and serving in India and Myanmar, also known as Burma. 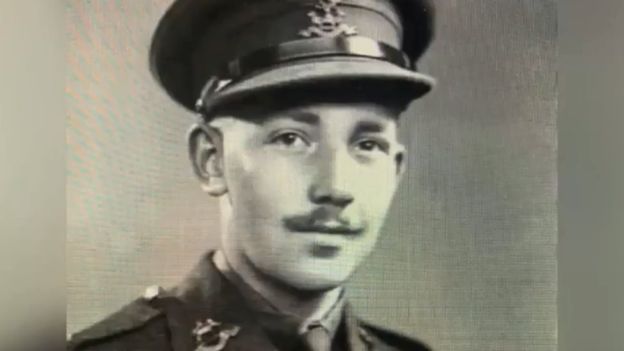 The veteran said plans for his 100th birthday party in two weeks’ time have been affected by the pandemic but that the national outpouring of love and support for him was “a party enough for me”.

“I think there will be thousands but I will make room for Capt Tom’s birthday cards somehow, that should be no problem.

“He is a regular visitor and has always got time and patience, he’s a real gentleman.” 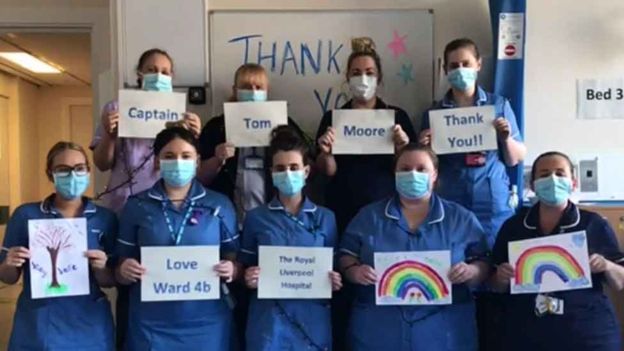 NHS Charities Together, which support health service charities and will benefit from the funds, said it was “truly inspired and humbled” by his efforts.

Its chairman Ian Lush said about 150 charities would benefit from the money.

“It’s extraordinary to see the amount of money and the outpouring of goodwill towards the NHS and towards all the NHS charities who will take good care with the money that he’s raising,” he said.

JustGiving confirmed it is the largest total ever raised in a single campaign on its site and it had itself donated £100,000 to Capt Tom’s “amazing campaign”.

“This is the largest donation JustGiving has ever made,” a spokeswoman said.

“[The campaign is] the largest total raised on JustGiving, the fastest growing campaign on the platform and has attracted donations and media coverage from around the world.”

NHS boss: 'I need gowns, can I call Burberry?'