Home > News > Could the coronavirus pandemic lead to mass surveillance in Europe? 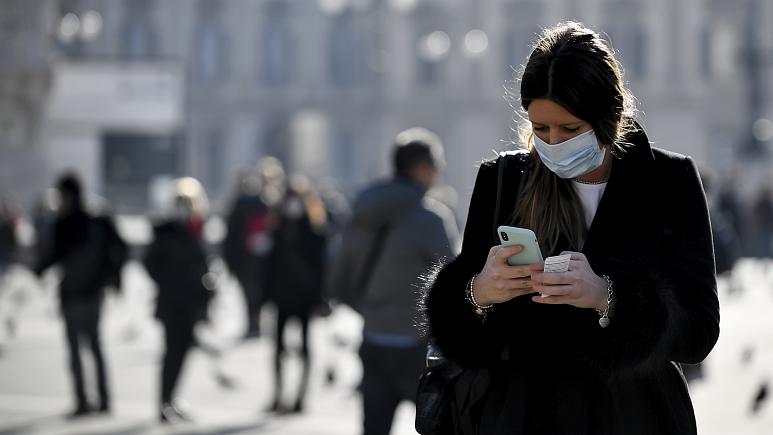 Governments and tech companies in the bloc and beyond have announced a swath of new measures amid the coronavirus pandemic.

In Thailand, people travelling from high-risk areas must download an app so that authorities can monitor their movements during their 14 days of quarantine. Meanwhile, in Hong Kong, the government are using electronic wristbands, QR codes and an app to enforce quarantine.

From opt-in apps to digital tracking, countries in Europe have been leveraging technology and data in the battle to curb the spread.

This opens up a key question, on how to toe the line between privacy and the need to use data in order to slow down the pandemic.

“Understandably, a lot of these measures are being implemented very quickly,” Samuel Woodhams, the digital rights expert at internet research firm TOP10VPN, told Euronews. Woodhams has been tracking new measures that are being implemented across the globe. “They need to be and there is an obvious reason as to why governments are acting so rapidly”.

“But there is also a real issue, because of the speed at which these are being implemented, they are avoiding public and political scrutiny”.

“That’s the million dollar question,” Woodhams said. “That is the really difficult thing here – whether these measures are proportionate and necessary at the moment. I think a lot of them are, but I think the major concern is that if they hang about for any longer than they’re absolutely necessary then there could be serious repercussions for liberties and human rights”.

“Normally both privacy and public health are a right and have very high status in public policy. The balance between the two is sometimes something that is needed. In particular, it is needed in times of emergency and in times of crisis,” Professor Andrea Renda, Head of Global Governance, Regulation, Innovation and the Digital Economy at the Centre for European Policy Studies (CEPS) think-tank in Brussels told Euronews.

Renda detailed the goal of public policy makers, which is to “protect public health during times of emergency even at the cost of compressing, temporarily, the right to privacy”. This, he said, is “just a principle” and depends on the details of plans.

That trade also depends on legality. “Europe is typically a legal system where the right to privacy has been given a very high status – a status of a fundamental right. Whereas in other countries, for example in the United States, this is not necessarily the case, not all the time, and privacy is much more what we would call a property right – something that can be traded and exchanged for something else.”

How are people being tracked in Europe?
There has been no pan-European strategy when it comes to digital tracking. However, numerous countries have made moves to introduce tracking measures, or have already done so. According to Woodhams’ research, European nations have implemented the most such measures.

Poland, for example, is among the countries listed in Woodhams’ report. It has released a “home quarantine” app, where users send a geolocated picture to the police to prove that they are not violating quarantine. The app is connected to a database of phone numbers of people who are under mandatory quarantine, including those who have arrived back in Poland after being abroad, or people who have been in close contact with someone who contracted the virus.

The police can send a text message asking for a picture and if this is not responded to within 20 minutes, another request is sent. Should the user fail to respond, “it will be a signal to the police that they should check that the quarantine rules are not violated”. By March 23, the first weekend since the app’s launch, 10,000 people were using it with 75,000 in the system.

According to the company, they are already creating an “aggregated and anonymous” heat map showing population movements in Lombardy, similar to those created by Facebook. Facebook has long shared anonymised population data with authorities to assist in times of crisis, from the 2019 Australian wildfires to assisting vaccinations.

There has been a rise in physical surveillance, according to Woodhams, with the use of drones in cities such as Brussels and Madrid by the authorities.

Meanwhile, doctors and scientists in Kings College London, created a ‘Symptom Tracker’ app, where people can download the app and detail their symptoms. The aim of this is to help health professionals better understand the symptoms while also identifying high-risk areas in the country.

The data, they said, is protected under GDPR and will only be used for “medical science and to help the NHS”. By March 27, over 1.5 million people had downloaded the app across the country and it will soon be available to download in the United States.

Can technology be useful?
“If you use technology in a way that compliments testing, so that you can be more precise in identifying the ones that should be tested because they have been in contact with someone that has tested positive, then this is going to be very helpful,” said Renda.

Technology can’t be used as an alternative to testing and contact tracing, however. “The more we are precise in identifying who should be tested, the better it is. This is where technology can come to the rescue. But technology alone, that is a lesson, is not going to solve anything”.

Singapore has been hailed as a success case in keeping the virus relatively at bay, to date. With over 900,000 downloads, Trace Together aims to enhance contact tracing and allow for more targeted testing with citizens volunteering to sign up to the app. It is bluetooth-based, and alters the user when they have been in close contact with someone who has a confirmed case of COVID-19, Woodhams explains.

The Health Service Executive (HSE) in Ireland has announced plans to release a similar type app within the next 10 days that is bluetooth-based and compliant with data protection. However, digital rights lawyers and activists have been vocal about their concern, with one such lawyer calling for a “data protection impact assessment” to be made before roll-out.

Although contact tracing technology can be helpful, mass surveillance is not necessary to contain the virus, according to Renda. “But using technology as a compliment to testing, good facilities and availability of medical equipment, that is what is emerging right now as the right policy mix in facing this crisis.”

What about GDPR?
These technologies are wide ranging, and whether they are compliant is determined on the type of app and how the data is used.

The European Data Protection Board (EDPB), has released a statement on processing personal data during the pandemic. In the statement, the board said that “data protection rules (such as the GDPR) do not hinder measures taken in the fight against the coronavirus pandemic”.

Even in exceptional times, however, the board says that personal data should be protected. “Emergency is a legal condition which may legitimise restrictions of freedoms provided these restrictions are proportionate and limited to the emergency period,” they said.

“GDPR allows for exceptions in their regulations especially when there are competing public interests,” Renda explained. The board issued guidance with regards to this, to clarify “under what conditions there could be exceptions to the full application of GDPR”. If there is a suppression of privacy, this must be both necessary and proportionate.

Is there cause for concern?
There has not been use of highly intrusive technology within Europe to date, Renda stated. “But in principle, this could happen depending on what kind of agreements are made between the mobile operators or the large tech platforms and the governments”, he said.

“There is a limit with what you can do with the information once you have collected it. I don’t know of any app, currently, at European level that goes beyond those boundaries”.

“I am more concerned by the special powers being implemented in Hungary, for example, so the laws that put the constitutional balance under strain just because of the emergency situation. This has not been translated into a specific technological application as of now, but many European countries are still about to feel the real heat of the virus, meaning that they are far from reaching the peak.”

“So, the more that this becomes a reality in many European countries, the more one needs to watch out that this does not happen in any of the countries, especially the ones that have a specific temptation to overuse technology and to accumulate more power in the hands of the government,” he said.

In a global context, rights group Privacy International has also raised concerns about the wide-ranging use of technology and the suppression of privacy. They have also been keeping a detailed track of such movements being made.

“When the pandemic is over, such extraordinary measures must be put to an end and held to account,” they said in a statement.

Could we see mass surveillance implemented in certain European countries?
“If it happens, it’s not because it was needed,” Renda said. “If it happens, it is because it’s always attractive from the perspective of a politician, especially the ones that don’t live in a very strong democratic context. It is always attractive to use technology to acquire as much information as possible”.

“Technology can be used in preserving very much the privacy of people and it will be extremely useful for us in the face of the COVID-19 crisis. But if, by any chance, mass surveillance develops in Europe, it will not have been for the coronavirus. The coronavirus will have been an excuse for this to happen”.