Covid-19: Brazil hospitals ‘run out of oxygen’ for virus patients

Hospitals in the Brazilian city of Manaus have reached breaking point while treating Covid-19 patients, amid reports of severe oxygen shortages and desperate staff.

The city, in Amazonas state, has seen a surge of deaths and infections.

Health professionals, quoted by local media, warned “many people” could die due to lack of supplies and assistance.

Brazil has recorded more than 205,000 virus deaths – the second-highest tally in the world, behind the US.

A new coronavirus variant has recently emerged in Brazil, with several cases in travellers arriving in Japan traced back to the Amazonas region.

Amazonas suffered heavy losses in the first wave of the pandemic but is also being badly hit by a new rise in infections.

Refrigerated containers were brought to hospitals to help store bodies last week, as authorities declared a state of emergency.

Jessem Orellana, from the Fiocruz-Amazonia scientific investigation institute, told the AFP news agency that some hospitals in Manaus had “run out of oxygen” with some centres becoming “a type of suffocation chamber” for patients.

The researcher told Brazilian media she had received reports from the front-line of “dramatic” scenes playing out in some hospitals.

In a widely shared video from the region, a female medical worker asks the internet for help: “We’re in an awful state. Oxygen has simply run out across the whole unit today.”

“There is no oxygen and lots of people are dying,” she says in the clip. “If anyone has any oxygen, please bring it to the clinic. There are so many people dying.” 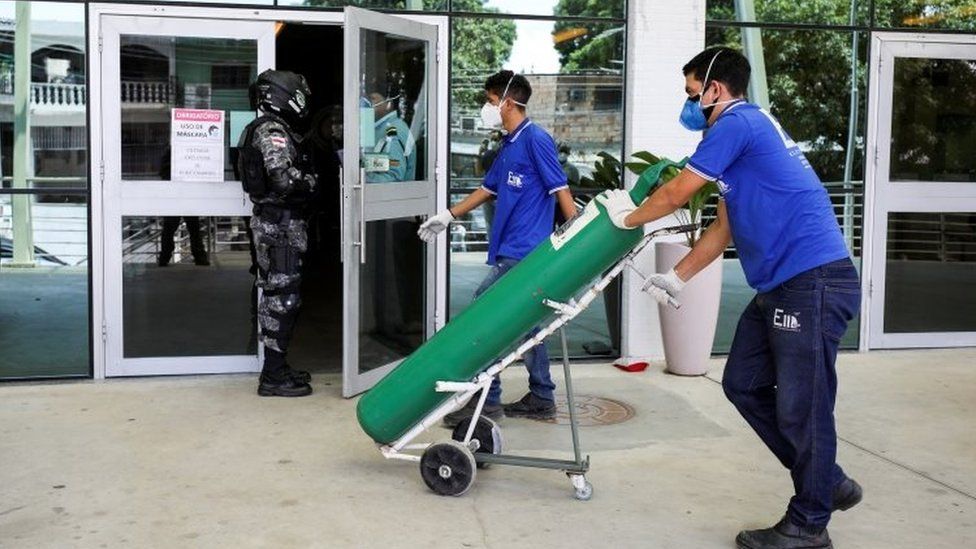 Amazonas Governor Wilson Lima said the state was “in the most critical moment of the pandemic” and has announced a nightly curfew will begin at 19:00 local time (23:00 GMT) on Friday to try to stem the spread.

Marcellus Campelo, a local health secretary, said the state needed three times the amount of oxygen it can produce locally and appealed for help.

Brazil’s vice-president shared images on Twitter of the air force transporting hospital supplies, including oxygen cylinders and stretchers, to the city as reports of the situation spread throughout the country.

Health officials also say some patients will be airlifted to other states for treatment due to the demand for intensive care units, Reuters reports.

Felipe Naveca, deputy director of research at the state-run Oswaldo Cruz Foundation, told the BBC’s South America correspondent Katy Watson that the new variant had evolved separately from those in the UK and South Africa, but that it showed some of the same characteristics: “Some of these mutations have been linked to increased transmission and that is of concern.”

Mr Naveca said that they did not yet have any data to suggest that existing vaccines would be any less effective against the new variant. “We have to do a lot more sequencing of samples to answer that question,” he said.

However, on Thursday UK officials announced a ban on travellers from South America, Portugal and Cape Verde due to the new strain.