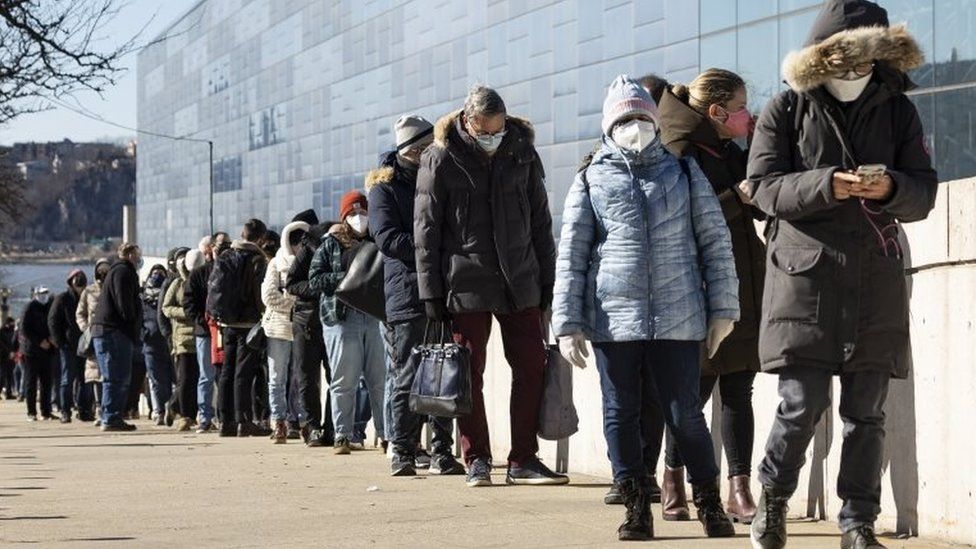 The US will have enough coronavirus vaccines for every adult by the end of May, President Joe Biden has said.

This will be two months earlier than previously expected, but Mr Biden said the vaccination drive must be extended, too, and people convinced to take it.

And he warned people to “stay vigilant” because “this fight is far from over”, with new variants a major concern.

His caution is at odds with some states, which are relaxing restrictions in order to boost their economies.

Mr Biden’s new timeline does not mean all adults in the US will be vaccinated by the end of May, as the jabs will take longer to administer.

Although there has been a sharp fall in confirmed cases since the start of the year – the figure of 68,000 a day now is well down on the 8 January peak of 300,000 – that drop has levelled off over the past week, fuelling fears of another wave.

More than 76 million vaccination doses have been administered – covering 15.3% of the population and the US remains on track to meet Mr Biden’s pledge of delivering 100 million Covid-19 vaccine doses in his first 100 days in office.

Some 1.74 million doses are being administered every day.

What was in Mr Biden’s latest announcement?
The president said that drug manufacturer Merck – which this year discontinued work on its own vaccine – would now be helping Johnson & Johnson to produce its newly approved one-shot drug.

“We’re now on track to have enough vaccine supply for every adult in America by the end of May,” he said, adding it was “the type of collaboration between companies we saw in World War Two”.

But the president acknowledged that supply was only one issue, with the nation needing to extend its vaccination drive and convince people to take the shots.

“We need vaccinators, people who put the shots in people’s arms, millions of Americans’ arms,” he said.

“Great news, but stay vigilant,” Mr Biden said. “It’s not over yet.” 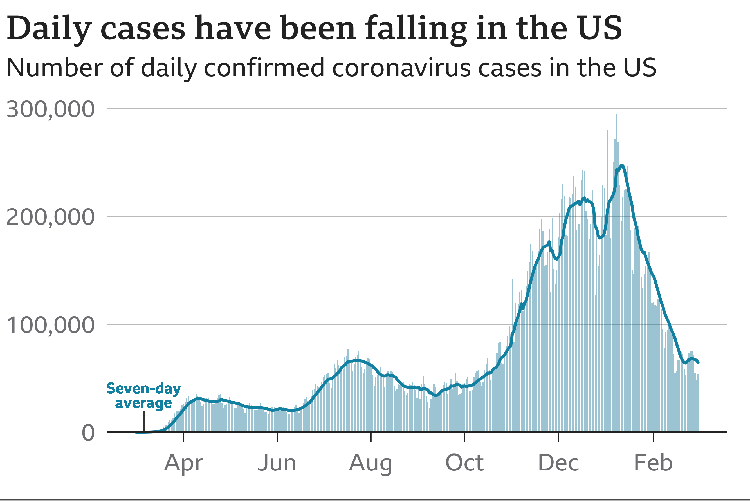 Another key announcement was the pledge to give every teacher at least one shot by the end of March, and speed up the reopening of schools.

But on a general reopening, President Biden was more cautious, saying he was unsure when a return to normal would be possible, although he did then say before “this time next year”.

What are the states doing on reopenings?
Some are now relaxing rules, despite a warning from top federal health officials last week not to ease up.

Mr Biden repeated that, saying: “We cannot let our guard down now or assure that victory is inevitable. We can’t assume that.”

Individual states are in charge of public health policy in the US. At the start of the coronavirus pandemic, most introduced restrictions on businesses and travel.

About 35 required face coverings to be worn in public places, although enforcement of these mask mandates has been patchy. 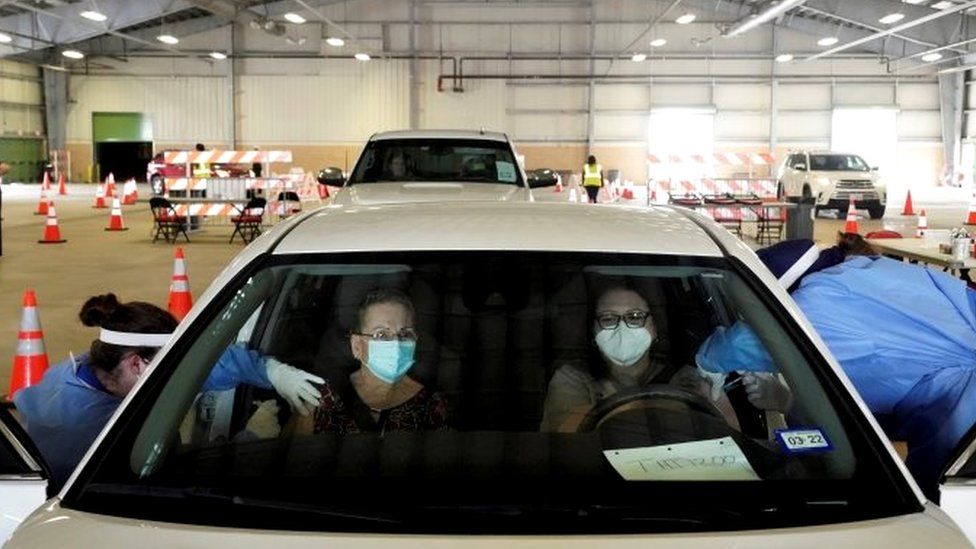 The governor of Texas on Tuesday issued an executive order, effective from 10 March, that rescinds most of the coronavirus measures he imposed.

Greg Abbott lifted the regulation ordering people to wear masks and said that businesses would be allowed to resume full capacity next week.

“It is now time to open Texas 100%,” the Republican said. “Too many small business owners have struggled to pay their bills. This must end.”

He said that with increased vaccinations and improved treatment for Covid-19, the state was “in a far better position now”.

The Democratic party in the state said the “crazy” move would throw away all of the gains.

Mississippi has followed Texas in removing the order on mask wearing, but it will come into effect even earlier – from Wednesday.

Other states have also announced a relaxation of some rules.

Michigan, which has a Democratic governor, is to ease capacity limits on restaurants, and on public and residential gatherings.

South Carolina has removed limits on large gatherings, while capacity limits on restaurants in Massachusetts were removed.

Some cities have also acted. Chicago has reopened public schools and San Francisco announced the easing of rules on museums, cinemas, gyms and indoor dining.

Health officials have warned that the pandemic is far from over and cases could pick up if curbs are lifted too soon.

On Monday the director of the US Centers for Disease Control and Prevention (CDC) warned of a “potential fourth surge of cases” if the country lapsed into complacency.

Covid-19 data shows that, while infections and deaths have declined in recent weeks, they are still at high levels relative to other countries.

The emergence of new variants could also require booster shots for those already vaccinated. 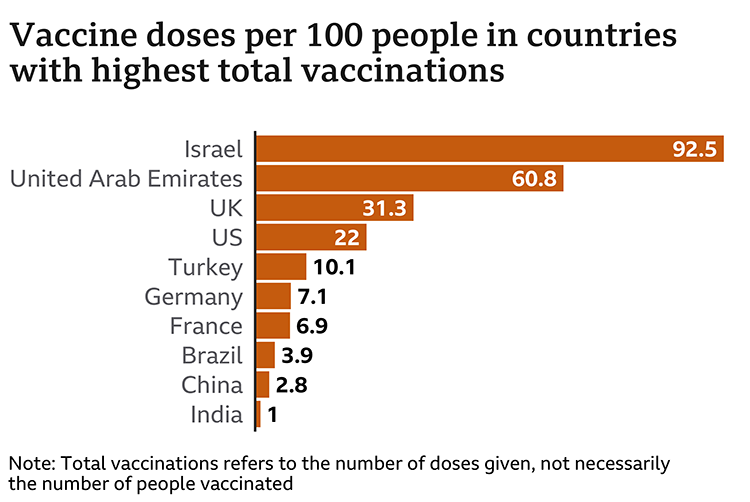 What are the latest Covid statistics in the US?

The US has recorded 28.7 million infections and 516,000 deaths related to Covid-19 since the pandemic began, according to Johns Hopkins University research.

The confirmed infections figure is nearly double that of second-highest India (11 million) and Brazil (10.5 million)

But the US ranks ninth in terms of deaths per 100,000 population, behind countries such as the UK and Italy

At least 90,000 more Americans are expected to have died with the virus by 1 June, an Institute for Health Metrics and Evaluation (IHME) projection says. By late May, the virus will kill around 500 Americans per day – down from approximately 2,000 now 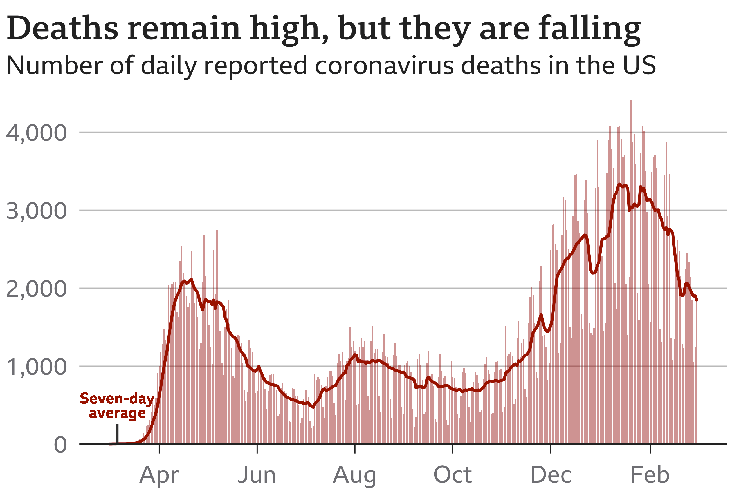 He walked and hitchhiked 1,250 miles home. India’s lockdown left him no choice.