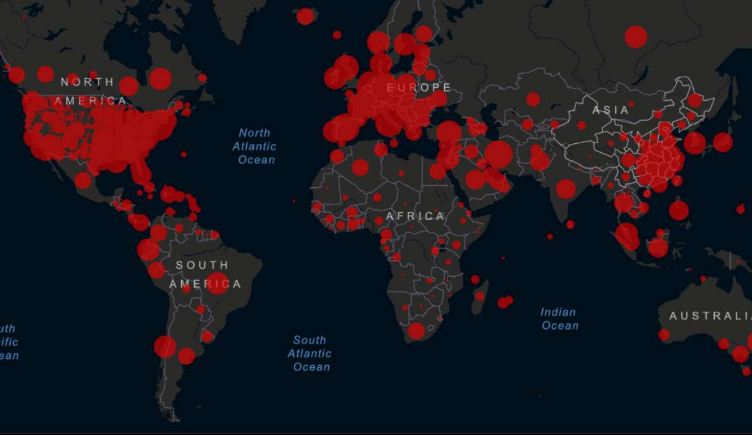 The coronavirus continues to disrupt daily life around the globe, with more than 50.5 million people confirmed to have contracted COVID-19 since Chinese officials implemented the first coronavirus lockdown in the city of Wuhan in January.

But Monday brought some potentially good news: Pfizer released data from its vaccine trials, saying its vaccine candidate was more than 90% effective at preventing COVID-19.

News of a potential vaccine comes as the U.S. is repeatedly breaking records. Almost 106,000 new cases of the virus were diagnosed Nov. 7, and more than 10.1 million Americans have contracted the coronavirus, according to data compiled by Johns Hopkins University. More than 1.26 million people, including more than 238,000 Americans, have died.

Ukrainian President Volodymyr Zelensky said Monday he has tested positive for the coronavirus and will self-isolate.

“I will overcome COVID19 as most people do. It’s gonna be fine!” the 42-year-old former comedian said in a tweet.

COVID-19 began surging in Ukraine in late summer and has taken a toll on understaffed and underequipped hospitals.

The country, which has a population of about 42 million, has reported more than 483,000 cases and 8,800 deaths since the start of the pandemic.

The Food and Drug Administration gave authorization Monday for emergency use of an experimental coronavirus treatment, bamlanivimab, which is a monoclonal antibody therapy.

The drug regulator is allowing the use of the treatment, developed by Eli Lilly, for people older than 12 with mild-to-moderate cases of COVID-19 who are at high risk for severe symptoms or hospitalization.

The treatment is similar to one President Donald Trump received when he was infected with the coronavirus, according to The New York Times.

The drug, which is still being researched, has been shown in clinical trials to reduce the need for hospitalization in patients at high risk for severe cases, according to the FDA. It is not allowed for patients who are already hospitalized or on oxygen due to coronavirus — researchers had previously found the drug is “unlikely to help” patients at advanced stages of the disease, reported NPR.

Despite President Donald Trump dropping hints that he wanted to fire him, Dr. Anthony Fauci said Monday he has no plans to leave as director of the National Institute of Allergy and Infectious Diseases.

David Bossie, who is leading the Trump team’s legal efforts to challenge the U.S. election results in several states, tested positive for the coronavirus on Sunday, Bloomberg and CBS reported Monday.

Bossie is among several people in President Donald Trump’s inner circle to test positive within the last week. Housing and Urban Development Secretary Ben Carson and Trump’s chief of staff, Mark Meadows, have both tested positive, along with a number of White House and Trump campaign aides.

On Monday, in his first remarks since declaring victory, President-elect Joe Biden implored Americans of all political leanings to wear face masks in an effort to curb the spread of the coronavirus.

“The election is over,” Biden said. “It’s time to put aside the partisanship and the rhetoric designed to demonize one another. … We’re united in our shared goal: defeating this virus.”

“It doesn’t matter who you voted for, where you stood before Election Day,” the president-elect continued. “It doesn’t matter your party, your point of view. We could save tens of thousands of lives if we just wear masks for the next few months.”

Ben Carson, the U.S. secretary of housing and urban development, has tested positive for the coronavirus, ABC and Bloomberg reported Monday.

Carson is “in good spirits & feels fortunate to have access to effective therapeutics which aid and markedly speed his recovery,” his deputy chief of staff told ABC’s Katherine Faulders.

Carson attended an election night party at the White House along with hundreds of other people, including Mark Meadows, Trump’s chief of staff, who also tested positive for COVID-19 within the last week.

President-elect Joe Biden congratulated Pfizer on its ongoing development of a COVID-19 vaccine on Monday, while reminding the general public that widespread vaccination is likely still months away and that face masks remain essential in preventing the spread of the virus.

“A mask remains a more potent weapon against the virus than the vaccine,” he said in a statement that cited the Centers for Disease Control and Prevention’s past recommendation to wear a mask.

Pfizer announced on Monday that early data suggests that its vaccine candidate, which continues to undergo a clinical trial, is 90% effective at preventing COVID-19. As Biden said, however, that does not mean a vaccine for the coronavirus, which has killed more than 237,000 people in the United States, is imminent.

“Americans will have to rely on masking, distancing, contact tracing, hand washing and other measures to keep themselves safe well into next year. Today’s news is great news, but it doesn’t change that fact,” Biden said.

Pfizer released an early peek at data from its COVID-19 vaccine trials Monday and said its vaccine candidate was more than 90% effective at preventing COVID-19.

The interim analysis looked at 94 infections recorded among its around 44,000 vaccine trial participants in the U.S. and five other countries. It’s unusual for a company to release such data so early.

The data shows that the company seems to be on track to requesting emergency use authorization from the FDA later this month.

Pfizer won’t stop its trials until it records 164 infections among all volunteers, a number the FDA is enough to tell how the vaccine is working. The 90% initial rate could change as the study continues.

The U.S. recorded 126,742 new COVID-19 infections on Saturday, a new high, and the country topped 10 million infections on Sunday, the latest evidence that the pandemic is far from over. The figures are stark and reflect soaring infections around the globe: The U.S. saw its latest million cases in just a 10-day period, and the 24-hour average for new cases over the last seven days has been over 100,000, higher than any other nation. Global cases have now exceeded 50 million.

President-elect Joe Biden’s campaign is urging its supporters to practice social distancing and wear masks while celebrating his election victory after crowds flooded the streets of some cities a day earlier to revel in the historic moment.

“I know folks are excited,” Symone Sanders, a senior adviser to the Biden campaign, told CNN’s “State of the Union.” “But we’re imploring folks across the country to be safe, wear your mask, social distance. This virus is very real and it’s deadly.”

Is Joe Biden about to reset US relations with Beijing? Here’s what he’s said so far about where he stands

Marriott says its business in China is rebounding