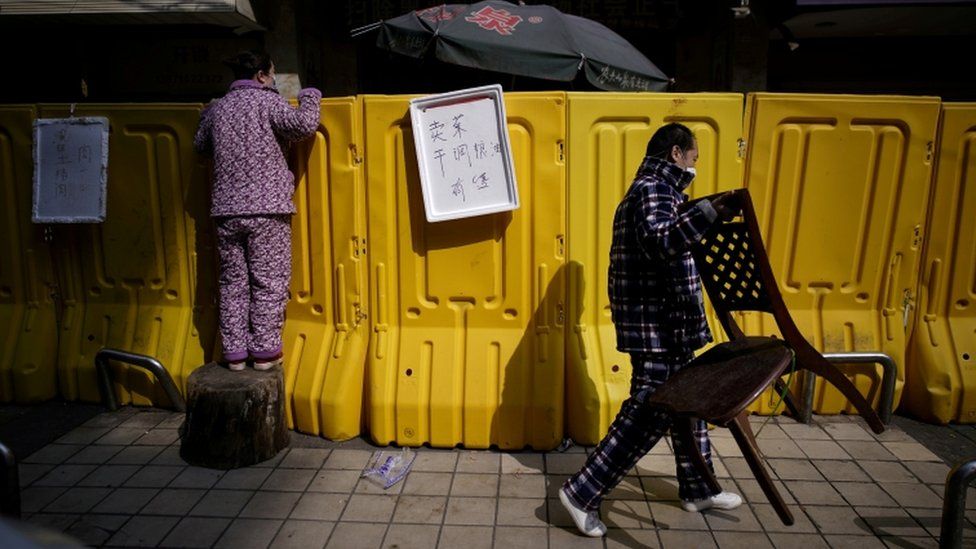 A World Health Organization (WHO) team has come out of quarantine and will start on-the-ground investigations into the origins of the coronavirus in the Chinese city of Wuhan.

The scientists will begin interviewing people from research institutes, hospitals and the seafood market linked to the initial outbreak.

Their research will rely upon evidence provided by Chinese officials.

This comes after months of negotiations between the WHO and Beijing.

Some relatives of Covid-19 victims in China are hoping to meet with the investigators. Zhang Hai, a Wuhan native whose father died in February, told the BBC he hopes speaking to the WHO can “aid their investigation”.

The group of 13 experts arrived in Wuhan on 14 January, and spent two weeks in quarantine that ended on Thursday. While in isolation, the team had been in video calls with each other and Chinese scientists.

On Thursday afternoon they exited their hotel and boarded a bus without speaking to journalists. Earlier in the day members of the team tweeted about the end of their quarantine, including pictures of themselves receiving letters certifying they had completed medical isolation.

Day 14 of our quarantine in Wuhan!! Slightly sad to say goodbye to my “gym” & my “office” where I’ve been holed up for last 2 wks!! (Clue – It’s all in the same room…). Moving into next phase of work now w/ @WHO mission team & China counterparts. pic.twitter.com/SC75H70WMK

Thea Fischer, a Danish member of the investigation team, told Reuters news agency that going outside after quarantining “is just as if one has landed from the moon”.

“I lived opposite two of the others in the team, so it was my hope that every time they knocked on the door, that the other two also went out and had their temperature measured, so you could at least exchange a few words and see a human being,” she said on Thursday.

The WHO had said its investigators were denied entry into China after one member of the team was turned back and another got stuck in transit. Beijing later said it was a misunderstanding.

Covid-19 was first detected in Wuhan in late 2019, but China has been saying for months that it is not necessarily the place where the virus originated from.

State media have recently suggested the pandemic might have begun outside of China – Spain, Italy or even the US – and have also carried claims that the virus has been entering the country through frozen food imports, though experts have cast doubt on this.

On Wednesday, White House spokeswoman Jen Psaki raised concern about “misinformation” from “some sources in China” and said it was “imperative we get to the bottom” of where the virus originated and how it was able to spread worldwide.

Her comments sparked outrage in China with Zhao Lijian, the spokesman for the Ministry of Foreign Affairs, calling on the US to “respect facts and science, respect the hard work” of the WHO experts.

In an earlier interview with the BBC, Professor Dale Fisher, chair of the global outbreak and response unit at the WHO, said he hoped the world would consider the investigation in Wuhan a scientific visit. “It’s not about politics or blame but getting to the bottom of a scientific question,” he said.

Prof Fisher added that most scientists believed that the virus was a “natural event”.

It was initially believed the virus originated in a market in Wuhan selling exotic animals for meat. It was suggested that this was where the virus made the leap from animals to humans.

“I think it’s necessary that the experts meet me and other people who have lost family members to the virus, and hear from our experiences,” said Mr Zhang.

“I hope the WHO will not be used as a tool to spread lies,” the 51-year-old said.

Mr Zhang said he believes delayed reporting about the virus by Wuhan city officials in the initial days of the outbreak had cost his father his life.

His family had travelled to the city in January last year from the city of Shenzhen, where they currently live, so that Mr Zhang’s father could receive subsidised surgery for a leg fracture.

The surgery was successful, but Mr Zhang’s father then contracted Covid-19 and subsequently died.

“If it was made known that there was a virus outbreak in the city, we wouldn’t have gone there,” he said.

“By covering up that fact at the time, many lives were lost, so the Wuhan government has knowingly committed murder. They need to be held accountable for that.

Until I get an official apology from the local authorities over what happened to my father, I will not give up.”

Local government officials in Wuhan and its surrounding Hubei province have been accused of downplaying the virus in the early days of the pandemic, and several were fired last year.

Mr Zhang claimed Chinese authorities have blocked his online calls for accountability as well as efforts to organise other families of Covid victims.

He said a WeChat group formed by the families that had at least 80 members was deleted recently without explanation. Six separate accounts which Mr Zhang had set up on microblogging platform Weibo to share his story have also been blocked. “Every time I write something, it’ll just get blocked,” he told the BBC.

Mr Zhang said police have paid visits to his home in Shenzhen as well, and in November last year he was summoned to a police station for questioning.

But he remains unafraid about potential repercussions. “I know I have done nothing wrong,” he said.

There’s more than 3 million coronavirus cases around the world