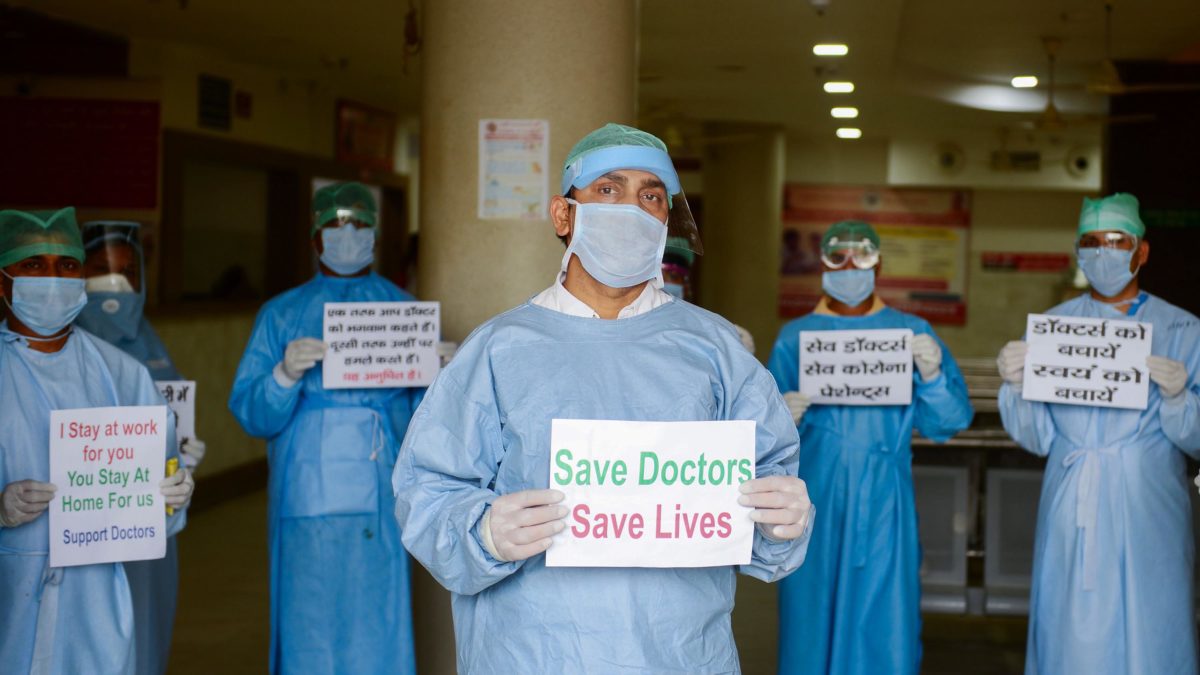 Doctors and medical staff of Narayan Swaroop Hospital hold placards to protest against the recent assaults on health workers in different parts of the country during a nationwide lockdown imposed as a preventive measure against the spread of the COVID-19 coronavirus in Allahabad on April 16, 2020. (Photo by Sanjay KANOJIA / AFP) (Photo by SANJAY KANOJIA/AFP via Getty Images)

Health care workers in India need to be protected by a nationwide law after a spate of violence against doctors and nurses, the Indian Medical Association (IMA) said on Monday.

The group issued a statement saying that “doctors have been abused, beaten up, denied entry and residence.”

“IMA has maintained utmost restraint and patience in spite of extreme provocations,” the statement read.

If the government does not formulate a central law on violence against health care workers, the IMA has called for a “black day” to be observed on Thursday where doctors will work with black badges. Further decisions will be taken if the government still does not act, according to the statement issued by IMA.

Doctors in India continue to face several challenges with the coronavirus pandemic. Lack of equipment, cases of doctors being attacked, and lack of adequate living facilities for doctors remain a problem according to doctors associations across the country.

“Earlier there was definitely a lack of personal protective equipment (PPE), but now even though they are available the standard of quality is low,” said Adarsh Singh, President of the Resident Doctors Association at All India Institute of Medical Science.

Over 100 healthcare workers have tested positive in Delhi alone, according to Singh. Delhi with 2,081 positive cases of coronavirus, including 47 deaths, has the second-highest number of cases in the country, according to the Indian Ministry of Health.

“With cases on the rise, there needs to be capacity building. Hospitals are not equipped to handle cases if the numbers continue to rise at the current rate and doctors are already working round the clock,” Singh added.

Maharashtra has the highest number of cases in the country with 4,666 positive cases of coronavirus including 232 deaths, according to the Indian Ministry of Health.

“Many doctors have tested positive for the virus already and those of us working on the frontlines at government hospitals live in hostels where effective social distancing is not possible,” a Maharashtra Association of Resident Doctors (MARD) spokesperson said.

At least 100 nurses have tested positive in Mumbai, according to Akash Pillai, general secretary of the Maharashtra United Nurses Association.

The Mumbai municipal corporation has begun providing hotel accommodation for doctors, especially those who live with their families, so that they don’t have to go home. However, this provision is much less than is required, according to the MARD spokesperson.

“All we want is adequate PPE to protect health care workers, [assurance] that we will be safe in discharging our duties and won’t be attacked, and proper living facilities,” Singh said.

According to the Indian Ministry of Health, India currently has 18,601 confirmed cases of coronavirus including 590 deaths.