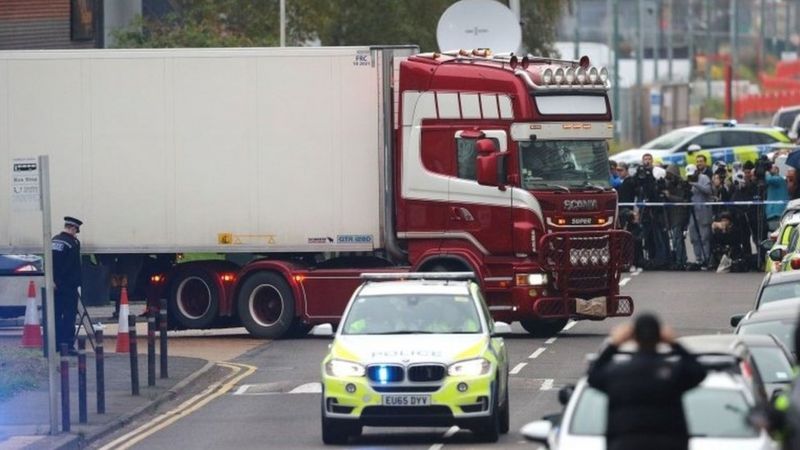 Four people have been jailed in Vietnam for their roles in the death of 39 migrants found in a lorry in Essex, according to state media reports.

The men, women and children were discovered in a refrigerated trailer in Grays on 23 October.

The four defendants were found guilty of “organising, brokering illegal emigration” after a one-day trial in Ha Tinh, VnExpress reported.

The state media outlet said one victim paid $22,000 for the illegal journey.

The four defendants, aged between 24 and 36, were given sentences ranging from two-and-a-half to seven-and-a-half years.

‘Asphyxia and hyperthermia’
The bodies of the Vietnamese nationals were discovered at an industrial estate soon after the lorry arrived in the UK on a ferry from Zeebrugge in Belgium.

Ten teenagers, two of them 15-year-old boys, were among the dead.

An inquest heard their medical cause of death was asphyxia and hyperthermia.

Gazmir Nuzi, 42, of Barclay Road, Tottenham, north London, pleaded guilty to a single charge of assisting unlawful immigration on or before 11 October 2019 and 18 April 2020.

Valentin Calota, 37, of Birmingham, and Christopher Kennedy, 23, of County Armagh, Northern Ireland, have each denied conspiracy to assist unlawful immigration.