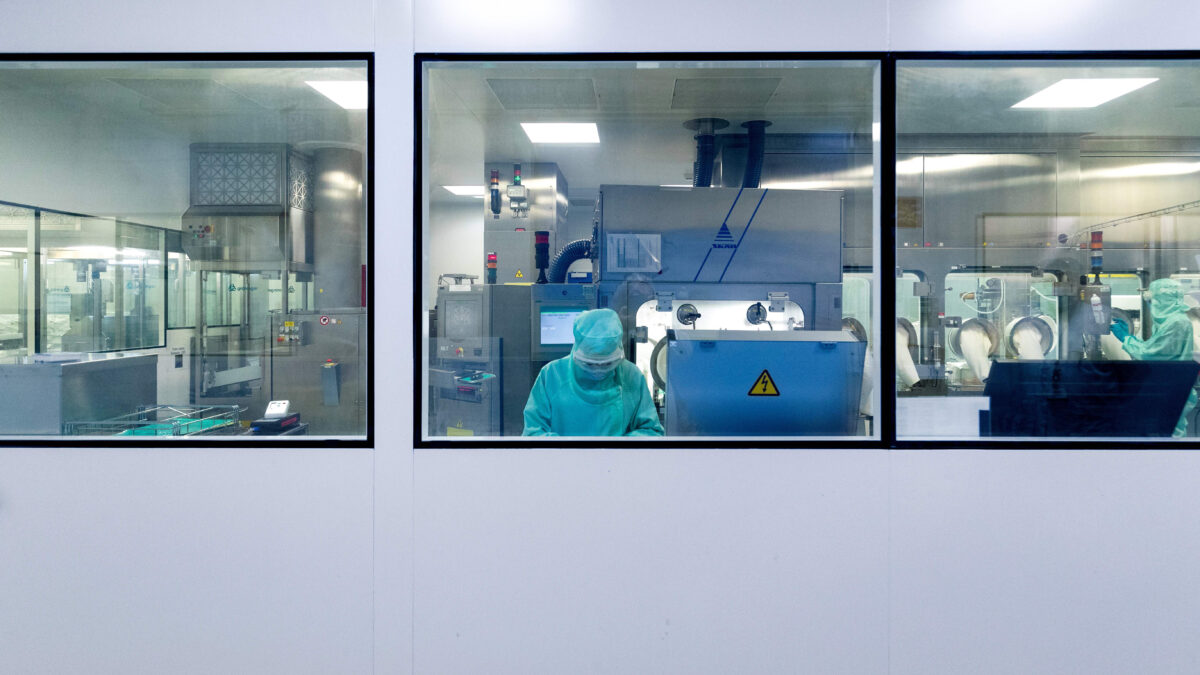 TOPSHOT - A filling operator wearing a Personal Protective Equipment (PPE), works in front of an isolator to fill syringes in a sterile area, at a French pharmaceutical company Sanofi's world distribution centre in Val-de-Reuil on July 10, 2020. (Photo by JOEL SAGET / AFP) (Photo by JOEL SAGET/AFP via Getty Images)

Drug giants GlaxoSmithKline and Sanofi Pasteur said Friday they had won a commitment from the US federal government to pay up to $2.1 billion to help the two companies move forward with their proposed joint coronavirus vaccine as part of Operation Warp Speed.

The companies had said in April they would work together to make a vaccine against Covid-19, using Sanofi’s flu vaccine technology and Glaxo’s adjuvant — a compound that boosts the power of a vaccine.

Now they have a deal with the US government to produce up to 100 million doses of vaccine next year, with an option for 500 million more doses. It’s the largest funding announcement for an Operation Warp Speed vaccine so far.

“The global need for a vaccine to help prevent Covid-19 is massive, and no single vaccine or company will be able to meet the global demand alone,” Thomas Triomphe, executive vice president and global head of Sanofi Pasteur, said in a statement.

The companies said they plan to start a combined Phase 1/2 safety study in September, with an advanced Phase 3 efficacy trial to start, if all goes well, by the end of the year.

“The portfolio of vaccines being assembled for Operation Warp Speed increases the odds that we will have at least one safe, effective vaccine as soon as the end of this year,” US Health and Human Services Secretary Alex Azar said in a statement distributed by Glaxo.

These include vaccines made by Moderna and Pfizer, which started advanced trials in volunteers on Monday; a vaccine from AstraZeneca and the University of Oxford that is in Phase 3 trials in the UK, Brazil, and South Africa, and which is expected to start US trials in August; and vaccines made by Johnson & Johnson and Novavax scheduled to begin Phase 3 trials in September. The Sanofi-Glaxo joint effort would be the sixth to be named as part of the program.

Pfizer and its vaccine partner BioNTech have a $1.95 billion deal with Operation Warp Speed; Novavax has a $1.6 billion deal; AstraZeneca’s contract is for $1.2 billion; Moderna’s awards total $900 million; and Johnson & Johnson subsidiary Janssen has a $450 million contract, according to HHS’s Biomedical Advanced Research and Development Authority website.