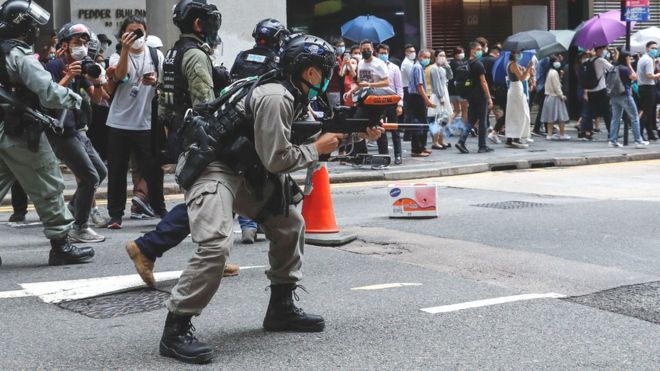 Police in Hong Kong have arrested about 300 people and fired pepper pellets amid new anti-mainland unrest.

Protesters were rallying against a bill on China’s national anthem and Beijing’s planned introduction of a national security law.

Police said the arrests were on suspicion of unauthorised assembly.

Protesters oppose the anthem bill, which would criminalise insulting it, and the security law, which they fear will strip Hong Kong of basic freedoms.

How did the protests play out?
The initial call by demonstrators had been to gather at the Legislative Council (Legco) building in the Central district. But it had been surrounded by riot police and blocked off by water-filled barriers and large protests there failed to materialise.

MPs there have been debating the second reading of the national anthem bill. 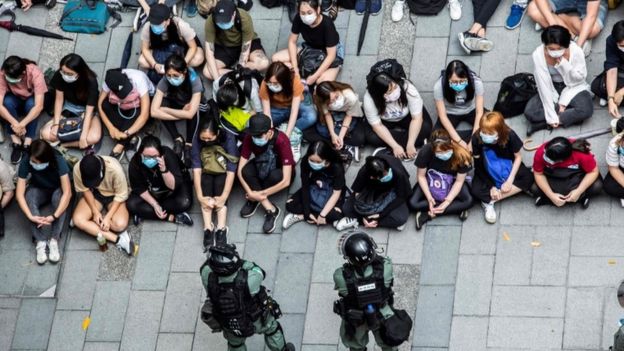 Protesters took to the streets, blocking traffic in both Central and Causeway Bay. Police said on a Facebook post they had arrested 180 people there.

They later added that another 60 had been arrested in the Mongkok district for blocking traffic, and 50 more in Wan Chai.

Other arrests were made for suspicion of possessing offensive weapons, including petrol bombs.

Marches and protests have taken place in a number of other districts.

One protester in Central told the South China Morning Post: “We want to protect our freedom of speech. It will no longer be Hong Kong, but will become just another Chinese city.”

Another demonstrator told Reuters: “Although you’re afraid inside your heart, you need to speak out.”

If it passes the second reading in Legco on Wednesday, it could go to a third reading and a vote early next month.

Hong Kong does not have its own anthem and so the Chinese anthem is sometimes played at events like football matches.

In recent years, the anthem has been booed frequently. A 2022 Fifa World Cup qualifier, for example, saw thousands booing.

What is the security law about?
Beijing has proposed imposing it in Hong Kong.

It would ban treason, secession, sedition and subversion and China says it is needed to combat violent protests that have grown in the territory.

The anti-mainland sentiment was fuelled last year by a proposed – and later scrapped – bill that would have allowed criminal suspects to be extradited to China. 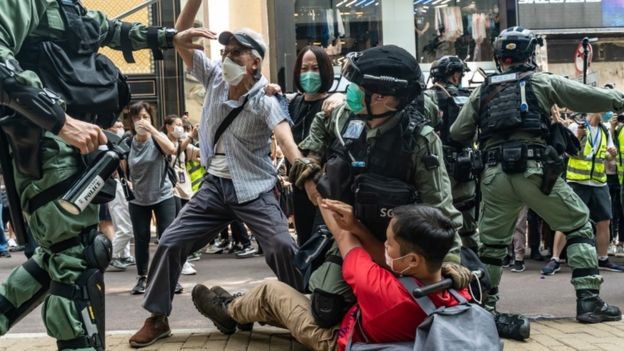 Critics say the security law is a direct attempt to curtail the freedoms given Hong Kong in the mini-constitution that was agreed when sovereignty was handed back to China in 1997.

Hong Kong’s Chief Executive Carrie Lam has denied that the law, which is set to go to a vote this week and could be in force as early as the end of June, will curtail the rights of Hong Kongers.

A group of 200 senior politicians from around the world have issued a joint statement criticising China’s plan.

On Tuesday, President Donald Trump said the US would announce a “very powerful” response to the proposed legislation before the end of the week. China’s plans had already been condemned by Secretary of State Mike Pompeo, who described them as a “death knell” for the city’s freedoms.

The UK, Australia and Canada have also expressed their “deep concern”.