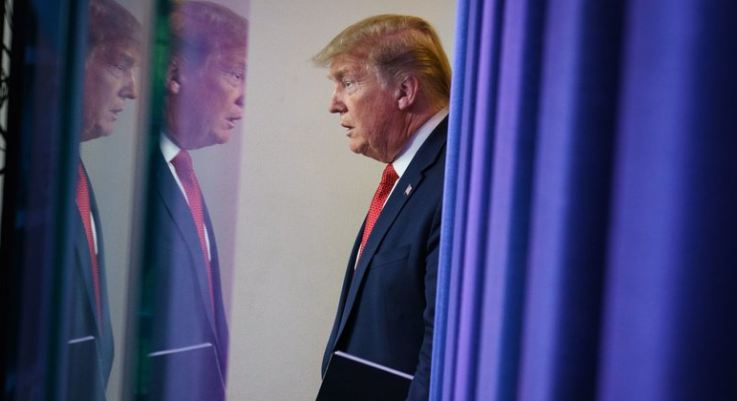 In COVID Briefings, Trump Again Relies On Both Shock And Strategic Retreat

Take the widespread response to the president’s assertion on Monday that he could reopen local businesses by fiat — even against the wishes of governors: “When somebody is the president of the United States, the authority is total.”

That sentence looks like a true-false question on a test in constitutional law class. (Answer: False.)

The next night, the president was walking back that widely repudiated statement to suggest a more cooperative posture. And by Thursday night, the message to governors was: “You’re going to call your own shots.”

Instead of orders to reopen, the White House laid out criteria for states to meet before their businesses and public spaces return to normal. There were “gates” to go through and “hurdles” to clear, with data-based criteria to determine the health risks involved.

But some experts said there was no new help for states in terms of testing or treatment. However, Dr. Anthony Fauci, the director of the National Institute of Allergy and Infectious Diseases who serves on the coronavirus task force, said Friday the U.S. had enough tests to move into Phase 1 of the reopening plan, which calls to limit social gatherings to 10 people or fewer and for vulnerable populations to continue to shelter in place.

Still, the states maintain they were left with no further assistance in meeting the various criteria for reopening. When questioned about more testing, Trump has repeatedly said that it was “up to the states.”

To some degree, Trump is empowered by the sheer force of the federal government and its central role in any national crisis.

On the night he declared his “total authority” over the states, Trump also said he would not need to use such powers. “It’s not going to be necessary because the governors need us one way or the other,” the president said, “because they’re going to need us, ultimately it comes with the federal government.”

The states — and the residents and businesses that are their constituents — desperately need that cash and those lines of credit. So they will work with the federal government, and to a large degree, that means working with the president.

Something similar is at work in the president’s announcement he was suspending the U.S. contribution to the World Health Organization, which gets roughly 20% of its budget from the U.S. and the American taxpayer.

Trump accused the WHO being “China-centric” and said the administration would review the organization’s handling of the pandemic over the next 60 to 90 days.

How could you cut off the WHO in the moment it is most needed? The very idea appears calculated to shock.

Funding from the U.S. to the WHO falls into two buckets — assessed dues and voluntary contributions. It is unclear how those contributions would change after the temporary freeze.

And the White House needs a win. The Pew Research Center released a poll Thursday showing 65% of Americans think the administration moved too slowly against the virus in the first months of 2020. That is a statistic the president cannot let go unchallenged.

On Wednesday night, we got yet another demonstration of the president’s modus operandi when he lashed out at Congress at another coronavirus task force briefing.

The offense in question in this case was the House and Senate’s habit of remaining officially in session even when out of town on recess. This is done to prevent the president from making “recess appointments” of officials who could then serve without Senate confirmation.

It looks silly, but it keeps Congress’ confirmation powers intact. It also means any executive officers who have not been officially submitted for Senate confirmation remain in “acting” status and do not have the full authority of their offices.

This week, however, the president said that he needs to have those he has nominated fully empowered and that he should be able to use his constitutional power of recess appointment to make it happen. If Congress won’t officially adjourn, he said, he has “the power to adjourn Congress.”

There is constitutional language allowing the president to call Congress into session or adjourn it. But the adjournment half of this has never been used, and it would seem to apply only in certain arcane circumstances.

Moreover, if it came to that, the whole mess would likely go to court, months would pass and no appointments would be official in the meantime.