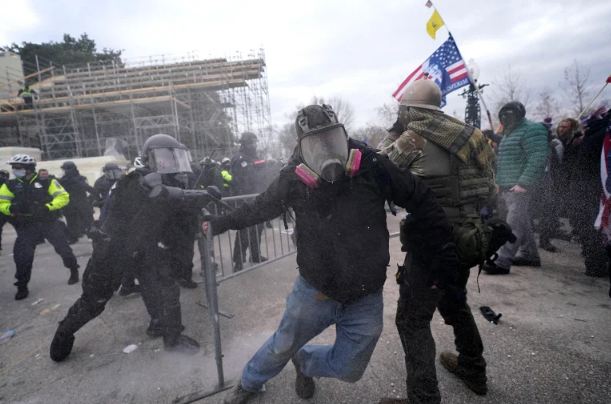 Seething with anger, mostly unmasked, Donald Trump’s supporters stormed and breached the U.S. Capitol on Wednesday, stoked by his defiant speech claiming the election had been stolen from him. Tens of thousands of supporters braved bone-chilling temperatures to hear him speak at the Ellipse below the White House, then many marched to Capitol Hill and up the steps, pushing their way past Capitol Police, as some of the lawmakers’ office buildings were evacuated. Washington, DC’s mayor issued a city-wide curfew, from nightfall through the next morning.

Democrat Rep. Elaine Luria, a Navy veteran, tweeted: “I had to evacuate my office because of a pipe bomb reported outside. Supporters of the President are trying to force their way into the Capitol and I can hear what sounds like multiple gunshots.”

Democratic Rep. Jim Himes of Connecticut tweeted that lawmakers had been asked to get out gas masks “as there has been tear gas used in the rotunda,” the circular building in the center of the Capitol.