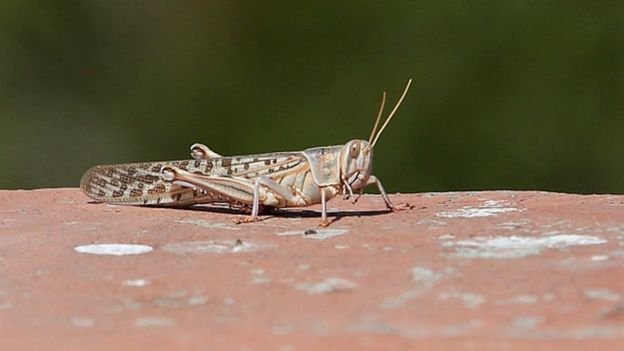 An invasion by desert locusts has hit large swathes of India and Pakistan in the middle of the coronavirus pandemic.

Large and aggressive swarms of these crop-devouring short-horned insects have invaded more than two dozen districts covering more than 50,000 hectares of desert areas of western India. Rajasthan, Madhya Pradesh and Gujarat are the worst affected states.

In neighbouring Pakistan, authorities declared a nationwide emergency in February, saying locust numbers were the worst in more than two decades. Local reports say that farmers are fighting the “worst locust plague in nearly three decades” and the swarms were decimating crops and sending prices of food soaring.

Some 38% of Pakistan’s area spread over the provinces of Balochistan, Sindh and Punjab are “breeding grounds” for locusts, according to a report by the Food and Agricultural Organization (FAO) of the United Nations.

Relations between the two hostile nuclear-armed neighbours have been frozen for years. But this hasn’t come in the way of India and Pakistan working closely to fight these migratory insects, say officials.

There have been some nine Skype meetings between the two sides since April, which plant-protection officials from Afghanistan and Iran have also joined, a senior Indian official told me. 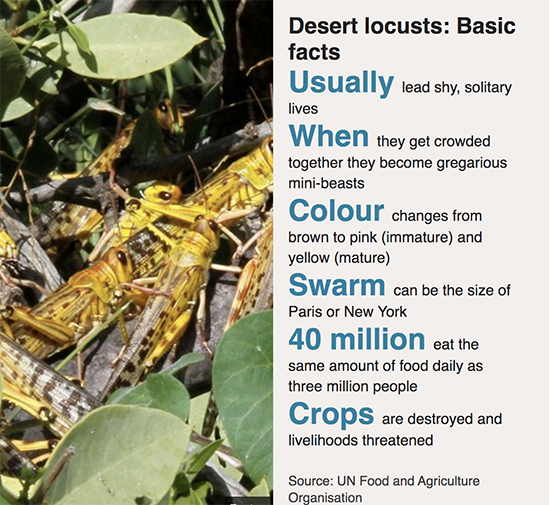 Before the Covid-19 pandemic, the two sides would meet physically on the border. They held five border meetings on locust control during 2017-2018.

“We are battling a major locust attack from across the border. This is the biggest invasion in nearly three decades. The swarms are very big and they have migrated from across the border after breeding a month earlier than we were expecting,” KL Gurjar, deputy director of India’s Locust Warning Organisation, said.

The swarms flew across the border around 30 April, and they are still active in five districts of Rajasthan and Madhya Pradesh. Each of these one-square-kilometre swarms contains up to 40 million insects and they travel fast, sometimes up to 400km (248 miles) in a day, officials say.

“We are lucky that there is no crop in the fields now. But the locusts eat up all the green vegetation, leaves, flowers, fruits, seeds and plants,” Mr Gurjar said. An average small locust swarm, say officials, can eat as much food in a day as about 2,500 people.

The Covid-19 pandemic is posing fresh challenges for some 100 odd workers who are battling the insects, using vehicle-mounted sprayers, pesticides and drones in the searing desert heat.

They are staying in the villages, where they are being given foods by locals, and going out at night to hunt down the insects in face masks and wearing some basic protective clothing. “They have migrated here after breeding across the border. It is a severe attack,” Om Prakash, a plant-protection officer, who works in Rajasthan state .

India has suffered from waves of locust invasions over the years: 25 locust plagues and upsurges were recorded between 1964 and 1997. The colonial government set up a locust warning organisation in 1939 in Karachi, now in Pakistan, after a series of locust attacks. India set up a a separate surveillance organisation in 1946.

If not controlled, desert locusts can damage food supplies and cause famine. Some 45 million sq km of land in 90 countries are potentially prone or under the threat of invasion by the desert locust, according to the FAO.

A second wave of a locust attack has also hit East Africa. Africa’s second most populous state, Ethiopia – along with regional economic powerhouse Kenya and politically unstable Somalia – are among countries worst hit.

The UN estimates the swarms could be up to 20 times bigger than during the first invasion -and they could become 400 times bigger by June. The World Bank has approved $500m (£409m) in grants and low-interest loans to help countries in East Africa and the Middle East cope with the crop loss after the attacks.

According to the UN, the current infestations can be traced back to the cyclone season of 2018-19 that brought heavy rains to the Arabian Peninsula and allowed at least three generations of “unprecedented breeding” that went undetected. Swarms have since spread out into South Asia and East Africa.

India, clearly, needs to be watchful in the months ahead. “We need to be alert and anticipate where this is going next. The situation is all the more alarming as it comes at a time when the affected states are already reeling under Covid-19 and the ongoing heatwave,” says Anshu Sharma of Sustainable Environment and Ecological Development Society, a non-profit disaster management organisation.