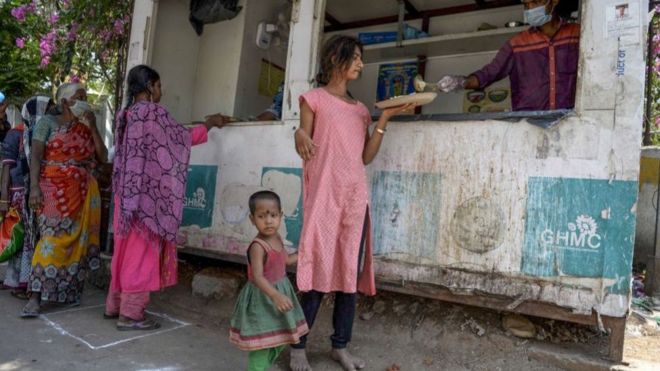 India has announced a $22bn (£19bn) bailout for the country’s poor to help counter the economic effects of the Covid-19 outbreak.

The package, which includes free food and cash transfers, was for “those who need immediate help”, she said.

She also said health workers would get medical insurance of up to $66,500.

Correspondents point out that this amounts to just 1% of India’s GDP – in stark contrast to the US and Singapore which are spending about 10% of their GDP on similar packages.

However, this could be just stage one, with similar packages set to be announced later, they added.

India’s economy was already in the midst of a severe slowdown before the country went into lockdown, shutting workplaces, factories and affecting millions of daily-wage and informal workers.

They form India’s vast informal sector, which constitutes a large part of its workforce. The lockdown and social distancing have left many of them with no viable means of getting any income, and many have expressed fears that they could starve.

Growth had slumped to 4.7% last month – the slowest pace in years – as a steep drop in manufacturing affected overall economic health.

Barclays said the total shutdown cost to India would be around $120bn, or 4% of the country’s GDP.

Ms Sitharaman, who is also the head of an economic task force announced by the prime minister, said that workers under an employment guarantee scheme would get a wage increment, and that recipients of other welfare schemes would also get benefits, like free gas cylinders instead of just subsidised ones.

The US reported nearly 700 deaths today