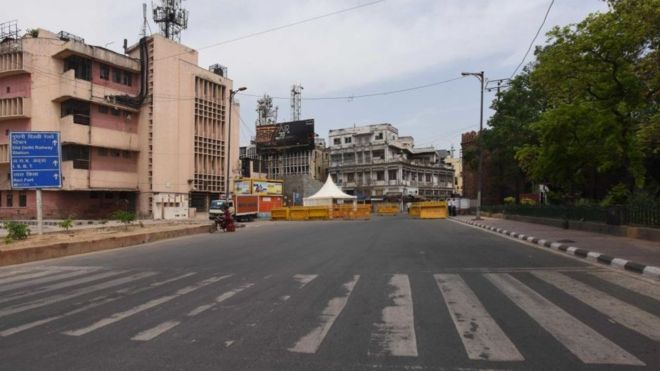 India has eased some restrictions imposed as part of a nationwide lockdown to curb the spread of the coronavirus.

Most of the new measures are targeted at easing pressure on farming, which employs more than half the nation’s workforce.

Allowing farms to operate again has been seen as essential to avoid food shortages.

But some other measures announced last week, will not be implemented.

This includes the delivery of non-essential items such as mobile phones, computers, and refrigerators by e-commerce firms – the government reversed its decision on that on Sunday.

And none of the restrictions will be lifted in areas that are still considered “hotspots” for the virus – this includes all major Indian cities.

So what restrictions are being eased?
Most of the new measures target agricultural businesses – farming, fisheries and plantations. This will allow crops to be harvested and daily-wagers and others working in these sectors to continue earning.

To restore the supply chain in these industries, cargo trucks will also be allowed to operate across state borders to transport produce from villages to the cities.

Essential public works programmes – such as building roads and water lines in rural areas – will also reopen, but under strict instructions to follow social distancing norms. These are a huge source of employment for hundreds of thousands of daily-wage earners, and farmers looking to supplement their income.

Banks, ATMs, hospitals, clinics, pharmacies and government offices will remain open. And the self-employed – such as plumbers, electricians and carpenters – will also be allowed to work.

Some public and even private workplaces have been permitted to open in areas that are not considered hotspots.

But all businesses and services that reopen are expected to follow social distancing norms.

Who decides what to reopen?
State governments will decide where restrictions can be eased. And several state chief ministers, including Delhi’s Arvind Kejriwal, have said that none of the restrictions will be lifted in their regions.

Mr Kejriwal said the situation in the national capital was still serious and the decision would be reviewed after one week.

India’s most populous state, Uttar Pradesh, will also see all restrictions in place, as will the southern states of Andhra Pradesh, Telangana and Karnataka.

The southern state of Kerala, which has been widely acknowledged for its success in dealing with the virus, has announced a significant easing of the lockdown in areas that it has demarcated as “green” zones.

This includes allowing private vehicular movement and dine-in services at restaurants, with social distancing norms in place. However, it’s implementing what is known as an “odd-even” scheme – private cars with even and odd number plates will be allowed only on alternate days, to limit the number of people on the road.