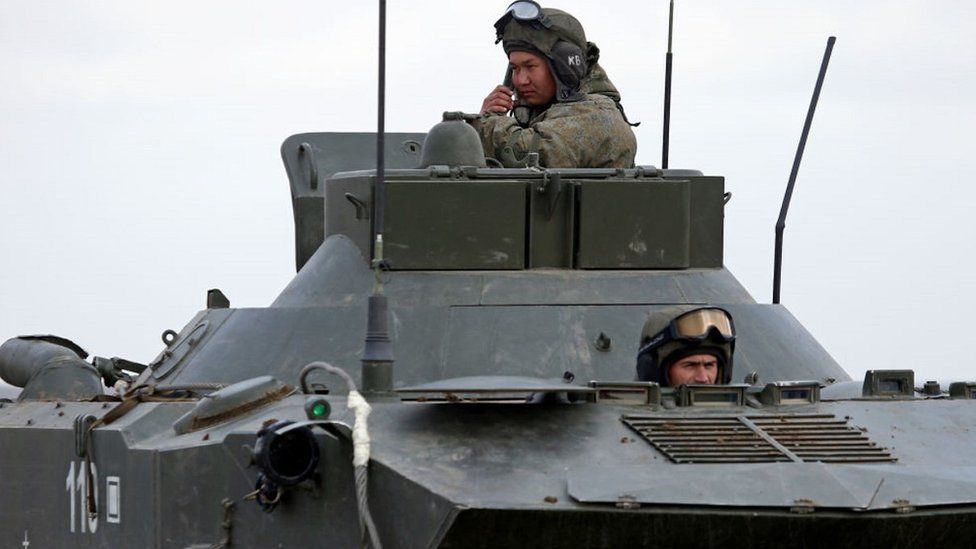 Sabre-rattling or preparations for war? Since mid-March, there have been many warnings from Ukraine and Western governments that Russia is massing troops in Russian-annexed Crimea and around the eastern Ukraine conflict zone.

Russia’s intentions are far from clear, but here’s a quick guide to the latest developments.

Is Russia preparing to invade Ukraine?
Multiple sources have reported large Russian military movements towards the eastern Ukraine border and into Crimea, which Russian forces annexed from Ukraine in March 2014. Many of these reports have appeared on Twitter, such as a Jane’s intelligence analyst’s tweets about Iskander short-range missiles.

The Kremlin has not given details about the units involved. President Vladimir Putin’s spokesman Dmitry Peskov said moving troops across Russian territory was an “internal affair” which should not concern anyone. Some of the troops, including units in Crimea, have been on exercises. But Mr Peskov also accused Ukraine of staging “provocations”.

Ukrainian intelligence sources told the BBC that the extra forces amount to 16 battalion tactical groups, which would be up to 14,000 soldiers. In total, according to the Ukrainian presidency, Russia now has about 40,000 on the eastern border and about 40,000 in Crimea.

So is this an invasion force? It could be, but analysts say a big invasion is unlikely. Infiltration would be more Russia’s tried and trusted method. Russian special forces without insignia – nicknamed “little green men” – took over Crimea in 2014.

Ukraine, Nato and Western governments say Russia also has regular units and heavy weapons in separatist-held eastern Ukraine. The Kremlin denies that and calls any Russian troops there “volunteers”.

Why is Russia at war with Ukraine?
Since the collapse of communism in 1991, Russian troops have intervened in conflicts in several areas of the former Soviet Union, notably in Chechnya and other parts of the Caucasus.

Known as Donbas, the conflict zone is mainly Russian-speaking, and now many of its residents have Russian passports. President Putin says Russia will defend Russian citizens abroad, if they are seen to be at risk.

Russian-Ukrainian relations now are certainly hostile, but it is not all-out war. There are sporadic clashes on the Donbas front line.

Russia’s use of GRU special forces, cyberwarfare and propaganda in this and other conflicts is known as “hybrid warfare” – not a hot war, but not a frozen conflict either. A US special report for Congress last year highlighted the role of the GRU.

There was large-scale combat in 2014, before a ceasefire in 2015. There have been some prisoner exchanges since then.

More than 13,000 people have died in the conflict. Ukraine says 26 of its troops have died in Donbas so far this year, compared to 50 in all of 2020. The separatists say more than 20 of theirs have died this year. 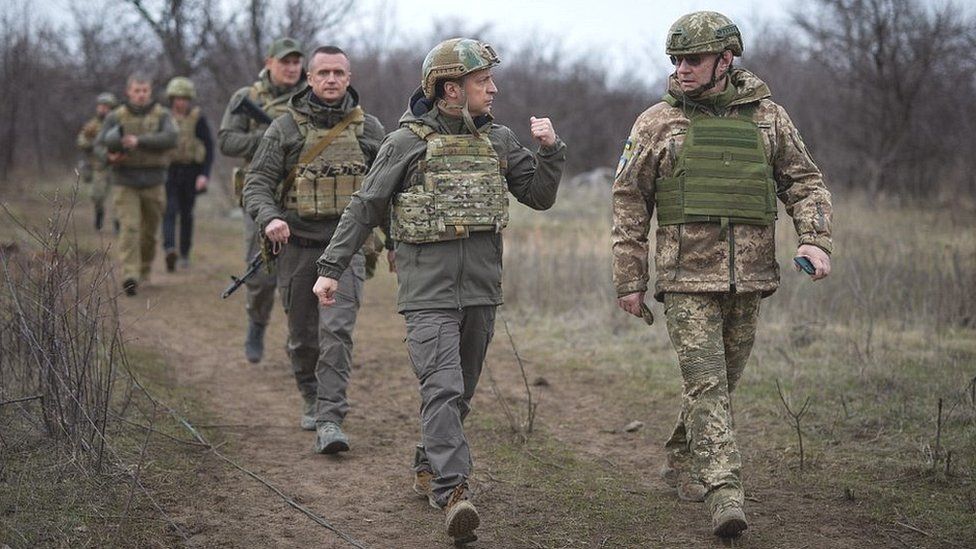 The Minsk peace deal agreed in 2015 remains far from being fulfilled. For example, there are still no arrangements for independently monitored elections in the separatist regions.

In previous conflicts in what it calls its “near abroad”, Russia has sent in troops as “peacekeepers”, who have ended up staying. It happened in Moldova and South Ossetia, for example. James Sherr says it could well happen again in Ukraine. It would freeze the position firmly in Russia’s favour.

Some speculate that Mr Putin also wants to test US President Joe Biden, who has taken a tougher stance on Russia than his predecessor, Donald Trump, had.

Mr Putin faces parliamentary elections in September and a continuing mass movement supporting his jailed arch-critic Alexei Navalny. So the Kremlin “defending” embattled Russians in Ukraine could go down well with many voters. Navalny might also be marginalised if the Kremlin whipped up patriotic fervour over Ukraine.

Is Ukraine protected by Nato?
Not by treaty, as Ukraine is not a member. But Nato has close ties with Ukraine, which has received Western arms including US Javelin anti-tank missiles. So Russia knows that it risks provoking more Western military help for Ukraine.

President Zelensky has urged Nato to speed up Ukrainian membership; but the conflict makes it difficult for Nato to accept Ukraine under the 30-nation alliance’s current terms.

More than 3,000 people have died in Sweden, which never locked down