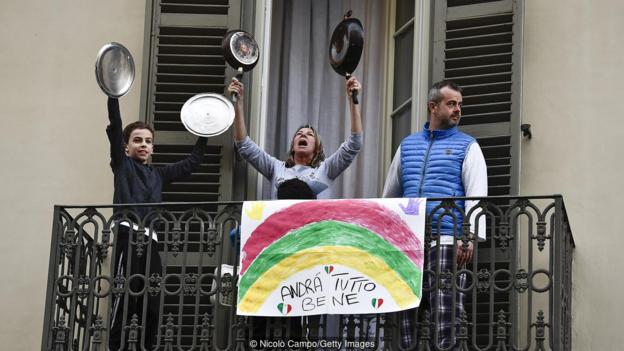 TURIN, ITALY - 2020/03/13: A family plays lids of pots and pans from balcony of their home where there is a banner reading 'Everything will be fine' in the neighborhood San Salvario during a flash mob launched throughout Italy to bring people together. The Italian government imposed unprecedented restrictions to halt the spread of COVID-19 coronavirus outbreak, among other measures people movements are allowed only for work, for buying essential goods and for health reasons. (Photo by Nicolò Campo/LightRocket via Getty Images)
Coronavirus, Europe, News

As Italy becomes the global epicentre for the coronavirus pandemic, the nation’s beautiful, shared showcase of Italian culture is nothing short of remarkable.

It’s late afternoon and my daughter and I are leaning out of our living room window, looking down at the usually bustling square in Rome’s historical centre where we live. On any normal day, we’ll watch groups of meandering tourists, couples walking their dog, a gaggle of nuns or a lover’s quarrel. Today, the piazza is empty. There’s just one person wearing a mask and gloves walking quickly down the street. A calming, eerie lack of noise blankets the neighbourhood. This is the new Rome, and the new Italy.
But as I look up and see several hand-drawn rainbow flags hanging from my neighbours’ windows with the expression “andrà tutto bene” (everything will be alright), I’m reminded that we will get through this and that things will get better. This simple phrase perfectly captures the feeling of hope and solidarity uniting Italy these past few weeks – and I, for one, have never been prouder to be Italian.

On 11 March, the Italian government effectively closed down the country, shuttering everything but essential stores like supermarkets and chemists and restricting all forms of public congregation in an effort to contain the coronavirus that has ravaged the northern region of Lombardy and spread like wildfire to surrounding communities.

“We must all give something up for the good of Italy. We have to do it now,” said Italian Prime Minister Giuseppe Conte, as he issued his emergency nationwide measure. “There is no more time – our future is in our hands.”

Overnight, we were ordered to stay inside with our immediate family for an indefinite homestay. We are allowed to venture outdoors for urgent work, food and health – but only with a Ministry-issued permit. Such stringent containment measures were often labelled as “draconian” outside of Italy. But as the world is increasingly grasping the necessity of social distancing to help slow this virus, similar orders have since been issued across Europe and parts of the rest of the world.

I’m particularly proud of how our government has responded to the gravity of this pandemic and prioritised public health, but I’m and even prouder to see how everyday Italians from across the nation have responded to it together. To be clear: distrusting authority and rules is something of a national pastime – we’ve had 61 governments since 1948, after all. Italy also essentially remains a patchwork of city-states where campanilismo (literally: “love of one’s local belltower”) often trumps national unity.

Within this context, Italy’s collective embrace of the nationwide #iorestoacasa (“I’m staying home”) movement is nothing short of remarkable. Moreover, it’s also proving to be an inspiring, shared showcase of Italy’s culture, creativity and character – and a reminder of why so many people around the world have fallen in love with Italy’s spirit, sense of generosity and zest for life over the centuries.

From Renaissance masters to modern chefs, we Italians have always had a distinct knack for creative improvisation and channelling chaos and uncertainty into beauty. The Ancient Romans lived by the phrase, “Dum vita est, spes est” (While there is life, there is hope), and that’s never felt more true in Italy than right now.

Every day, as the bells chime 18:00 in our Roman neighbourhood, we open our windows and sing uplifting Italian classics with our neighbours. Yesterday, it was Nino Manfredi’s Tanto pe’ Cantà (Just for singing); today, it’s Al Bano and Romina Power’s Felicità (Happiness); and tomorrow it’ll be Rino Gaetano’s Ma il cielo è sempre più blu (The sky is always bluer). We turn up the volume, dance at the window and wave to our neighbours across the piazza. In just two weeks, this 18:00 tradition has become fundamental to our daily routine and spread across Italy, becoming the country’s new national pastime to spread hope and boost morale.

In villages and cities across the country, a chorus of voices have been recorded singing the Italian national anthem in unison from their windows. In Turin, an opera singer recently sang an aria alongside a lone violinist from her balcony. Here in Rome, a couple was spotted slow-dancing together in their living room as a scene of Fred Astaire and Ginger Rogers dancing was projected on the side of their building. In Florence, tenor Maurizio Marchini gave a stirring rendition of Giacomo Puccini’s Nessun Dorma (None shall sleep), pumping his hands as he belted the emotional climax, “all’alba vincerò” (at dawn, I will win). And in Milan, a trumpeter played the city’s unofficial anthem, Oh mia bella madunino, (a reference to the statue of the Virgin Mary that sits atop Milan’s cathedral and is visible across the city) closed off inside a wrought-iron window. A video shows residents in masks stopping to film the musician before erupting into applause at the finale and shouting “Forza Milano!” (Go Milan!)

Increasingly, Italians are turning this moment of shared national spirit into public good. In the Tuscan medieval city of Siena, a haunting viral video is spreading around the world of a neighbourhood singing a traditional folk song together in the darkness while in quarantine. Now, there is an official citywide singing programme at 21:00 every night called Siena Canta (Siena Sings), where residents chant out of their windows to raise donations for emergency responders and the Siena hospital.

Pandemic-imposed family time and curtailed social life also brings out the very best in Italian ingenuity and spirit – and so far, it’s keeping us busy. At 12:00 each day, we head to our windows and balconies to all applaud the medical professionals who are working non-stop in this fight – a practice that, like our hand-drawn rainbow flags, has since spilled over to Spain, France and other nations.

And while we may not be going out to dinner or cocktails, we have maintained the Italian tradition of apericena (happy hour) by hosting digital drinks and dinners with friends and family members online. Interestingly, everyone in Italy is a cook again. In the absence of restaurants, it seems that more and more quarantined Italians are rediscovering age-old family recipes from their nonne (grandmothers) and sharing them across social media.

Newspapers are joining in, too, calling for Italians to submit recipes and images of their favourite regional dishes so they can republish them to celebrate the richness of Italian cooking. “Forced to stay inside, what could be more beautiful than gathering around the table?” wrote La Nazione. “You can draw on tradition, of which our territories are undisputed cradles, or innovate.”

Our household has been joining Massimo Bottura, one of the world’s best chefs, every evening in his home kitchen in Modena for his live Instagram show, #KitchenQuarantine. Each day, Bottura dives deep into his pantry and refrigerator, emphasising the Italian knack for using what you have instead of running to the market every other day.

“It’s not a masterclass. It’s kitchen quarantine with our family,” Bottura told his viewers. “We just want to have fun and show to the world that with a few things – a table, a few ingredients, a family – we can have fun.”

While all Italians are united in isolation, we’re also looking out for those most vulnerable. Because of Italy’s traditionally close-knit family structures, many younger people grew up hearing stories from their grandparents of the food shortages and destruction brought about after World War Two – thus, instilling a sense of selflessness and civic duty that is now on full display.

In Rome and Milan, millennials are connecting to the elderly through the app Next Door and bringing them food and medication. In Florence, members of the Bianchi, the calcio storico (an ancient form of football mixed with rugby originating in Florence) team whose roots go back 500 years, are delivering groceries and paying bills for those who can’t get out. “There’s nothing more ‘Florence’ than this,” said Florence resident Georgette Jupe.

Meanwhile in tiny towns like Pietracupa, Molise, a community of about 150 people, it’s as simple as a call. “If anyone needs anything and can’t get out for some reason, they call the shop and one of us will walk it over and leave it by the door,” my friend Christine Cantera recently told me.

As it gets close to 18:00 during another day spent indoors, I look around the piazza and all is quiet. It is tough to be positive in a world of uncertainties. Italy now has more coronavirus deaths than any other nation and has become the global epicentre in the fight against this pandemic. In Northern Italy, churches are now filled with cadavers waiting to be buried, and the military has started filling trucks with the bodies of coronavirus victims because there is no more room in morgues.

When will the numbers decline? When will school re-open? Will this epidemic reach our doors? These are questions my daughter asks me every day. I can only answer that we have to be patient, responsible for ourselves and look out for our fellow citizens. If Italy has taught the world anything in these last few weeks, it’s that hope always wins and culture endures.

And then I remind my daughter that it’s time to open the windows, turn up the volume and queue up the next song. “Andrà tutto bene,” I tell her.

If you liked this story, sign up for the weekly bbc.com features newsletter called “The Essential List”. A handpicked selection of stories from BBC Future, Culture, Worklife and Travel, delivered to your inbox every Friday.

Coronavirus: Asian 'poster child' heads for recession due to virus