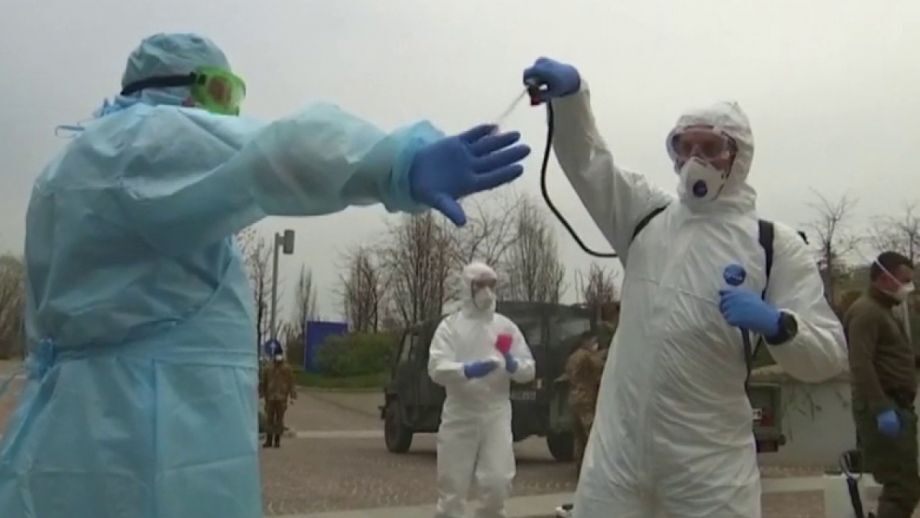 Italy’s poorer south appears to be readying for war, expecting a sudden explosion in coronavirus cases within the next 10 days, as the novel illness advances down the peninsula from the northern, affluent Lombardy region.

One of the first cases of the coronavirus in Italy was identified February 21 in Codogno, a town of just under 16,000 people located southeast of Milan in the northern Lombardy region. The rapid spread of the virus devastated the region within a matter of weeks. Lombardy now accounts for nearly half — 41,007 – of the country’s confirmed cases, with at least 6,360 deaths, according to Milan News International.

A nationwide lockdown was implemented on March 10 to slow the spread of the virus – but still, cases continue to rise in the south, most notably in the dense city of Naples, where nearly 1 million people squeeze within 46 square miles, and the surrounding Campania region.

“In the South, the situation is about to explode dramatically. The next 10 days here will be hell,” Vincenzo de Luca, Campania’s governor, said in a recent letter addressed to the central government, according to The Wall Street Journal. “There is the real possibility that there will be a tragedy in the South, on top of Lombardy’s.”

His letter requested additional ventilators for hospitals in the south, a region historically worse off economically compared to the country’s northern industrial hub. Most equipment, including surgical masks, have been prioritized to address the crisis in Lombardy, while some local business in the south, otherwise devastated by the nationwide lockdown, are sewing protective gear for medical personnel.

“Almost everything has gone to Lombardy,” Michele Emiliano, the governor of Apulia, a region that sits on Italy’s boot, told the Journal, explaining he spends most of his day tracking down medical supplies to purchase. “We are preparing for war, but we don’t have all the necessary tools.”

Lombardy, as well as 14 other surrounding provinces in the north, were placed under lockdown earlier this month, prompting thousands of mostly university students to hop on some of the last trains south before travel restrictions went into effect. Individuals who returned from the north were instructed to self-isolate for two weeks, but many already infected older relatives by coming home.

“A number of COVID patients have contracted the virus through members of their families who returned from Lombardy,” Giovanni Migliore, director of a hospital in Bari, the capital of Apulia, told The Journal.

Italian Prime Minister Giuseppe Conte extended the lockdown to apply to the entire country on March 10 and has been periodically rolling out stricter measures to halt public life, most recently closing all non-essential businesses in the country.

De Luca estimated 20 percent of the 5.8 million people in Campania have defied federal lockdown measures. The governor announced his own restrictions, banning all outside exercise and threatening anyone caught outdoors for non-essential trips to grocery stores or the pharmacy would be forced to self-isolate for two weeks, The Journal reported.

In a livid video address to defiant students who were reportedly planning graduation parties, de Luca said: “We’ll send the police with flamethrowers.”

The city of Bergamo, located southeast of Milan, is currently the worst-hit by the virus, with the Italian military sending trucks to transport bodies out of the city’s crematorium and morgues overwhelmed by the sudden surge in deaths.

The Italian army’s Alpini mountaineering forces are building a field hospital in Bergamo to be staffed, in part, by some of the 150 medical personnel sent by Russia, one of only a handful of countries along with China and Cuba to respond to Italy’s urgent appeal for medical equipment, protective masks and personnel, the Associated Press reported.

But the need is also growing in the south, where hospitals are even less prepared and equipped than the prosperous north. In one week, Apulia went from 478 cases to 1,182, with a doubling of ICU patients, according to the AP. Campania also doubled its caseload to 1,310 and tripled the number of people in ICUs.

Hospitals in Apulia are acting in advance to contain the virus, as they anticipate a surge in cases. Ten of the 57 local hospitals have been designated solely for COVID-19 patients. The region also added 106 new intensive care unit beds and 237 sub-intensive care places, which offer specialized treatment but without intubation on ventilators, the Journal reported.

Meanwhile, police were deployed to major supermarkets in the city of Palermo in Sicily amid reports people were trying to loot for groceries, prompting the Italian government to announce Saturday it would finance food vouchers for needy families.

Cateno De Luca, mayor of the Sicilian city of Messina, took the extraordinary step of recording a warning to residents in his nasal, gravelly voice for drones to play as they fly over the seaside city monitoring residents’ movements, the AP reported.

“Don’t go outside! That is an order from Mayor De Luca!” the drone blasts.

Italy reached a new grave milestone Saturday night, reporting a total of more than 10,000 deaths from the coronavirus throughout the country. The number of confirmed cases reached more than 92,000 as of Sunday morning, according to Johns Hopkins University.

The president of Italy’s National Institutes of Health, Dr. Silvio Brusaferro, said Friday that Italy hadn’t yet reached the peak of its infection curve or begun to see a decline. But he said: “What we have are signs of a slowing that makes us think that we are close.”

Common heartburn drug being studied as treatment for Covid-19