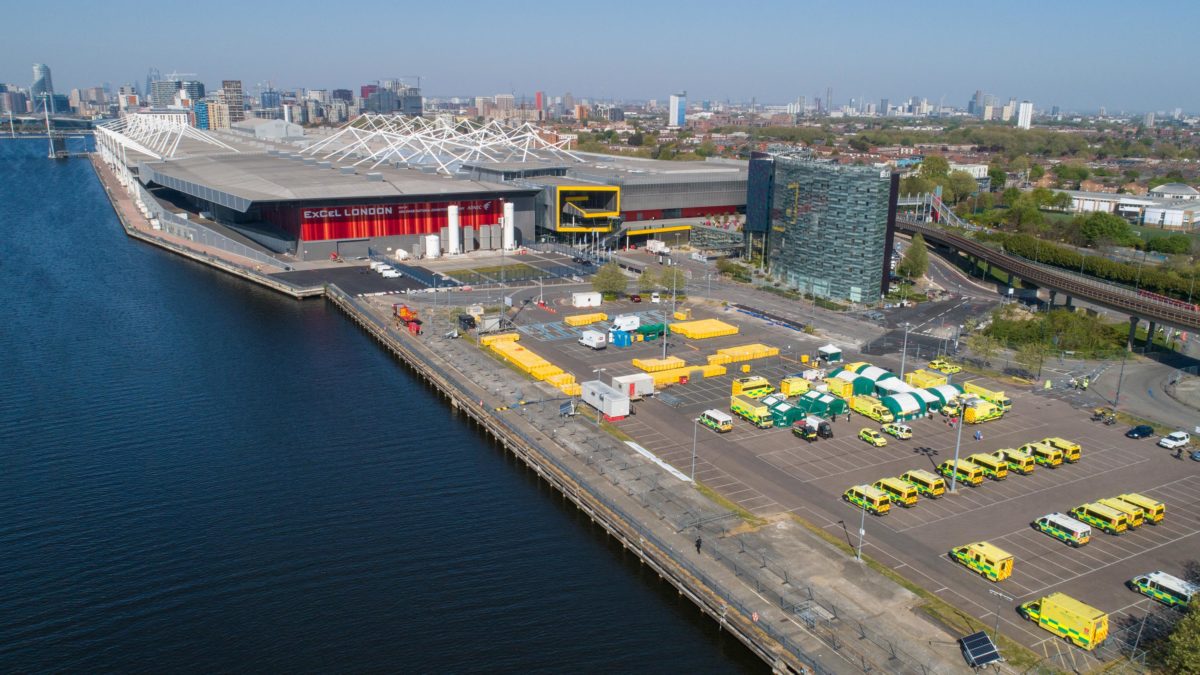 Ambulances and other emergency response vehicles sit parked outside the ExCel conference center, which has been converted into an NHS Nightingale hospital to deal with the coronavirus pandemic, in this aerial view of the Docklands district in London, U.K. on Wednesday, April. 22, 2020. U.K. inflation slowed in March as the nation entered lockdown and oil prices continued to tumble. Photographer: Jason Alden/Bloomberg via Getty Images
Business, Coronavirus, Europe, News, UK, USA, World

The coronavirus blame game has reached a new level after Missouri announced it was suing China over the crisis. The US state is seeking damages for what it described as a campaign of “deception” and insufficient action to halt a “preventable” pandemic — allegations Beijing strongly denies.

The conflagration over China is becoming a key flashpoint in the 2020 race, with President Donald Trump and presumptive Democratic nominee Joe Biden sparring over the country’s role in the spread of the virus. The battle could turn into a critical showdown in November’s election, Stephen Collinson writes.

Beijing has faced intense scrutiny and criticism over its handling of the coronavirus, and not only from Washington. But the pandemic still presents an opportunity for China to solidify its status as a superpower and global leader – especially as Trump alienates some allies with his “America First” approach, James Griffiths writes.

One outspoken critic of China’s government knows what it means to be socially isolated. The dissident artist Ai Weiwei, who was detained for three months by authorities back in 2011, told CNN that the coronavirus had only strengthened the “police state” in China.

With the Wuhan epidemic now contained, David Culver has returned to see how people there are navigating a new normal, after nearly three months living in lockdown.

Here are Wednesday’s other developments…

Trump backs off full immigration ban: Trump has announced a 60-day ban on immigrants seeking green cards to live in America permanently, but backed away from plans to stop workers entering the country on a temporary basis.

Famine of “biblical proportions”: The developing world is facing “multiple famines of biblical proportions within a short few months” unless urgent action is taken, the UN’s food relief agency said. It warned that the pandemic would push an additional 130 million people to the brink of starvation, on top of another 135 million who were already facing crisis levels of hunger.

Homeschooling widens inequality gap: A staggering 90% of the world’s students are in lockdown. But it’s going to hit poor kids much harder than rich ones. The inequality gap, present in education systems at the best of times, is being exacerbated by school closures worldwide, experts say.

Bangladeshi garment workers face ruin: When Fatema Akther arrived for work at the Alif Casual Wear garment factory in Dhaka in late March, she had no idea it would be her last day. She’s one of millions of garment workers — most of them women — estimated to have been furloughed or laid off in Bangladeshi factories, as global demand for fast fashion dries up.

Warning of second wave next winter: The director of the US Centers for Disease Control and Prevention has warned that another wave of coronavirus next winter could be “even more difficult” than the current outbreak because it would coincide with flu season.

A version of this story first appeared in CNN’s Coronavirus: Fact Vs. Fiction newsletter. You can sign up here to receive it in your inbox every day.

Life after lockdown: How the coronavirus pandemic is changing the way Britain builds