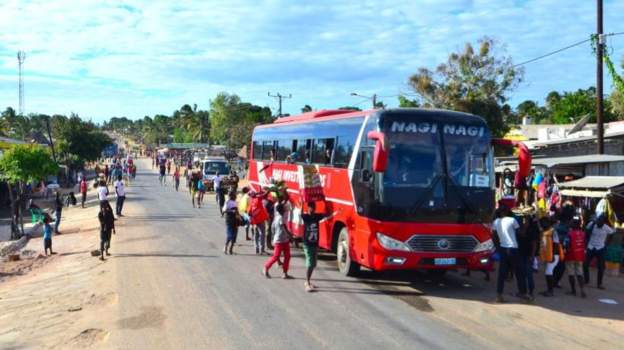 Islamist militants in northern Mozambique have overrun another town in Cabo Delgado province.

They fired into the air, causing people to flee and later received reinforcements from Cabo Delgado’s northern Mocimboa da Praia district, where the jihadists are believed to have their main base.

In response at least two helicopters were reportedly deployed and fired on to the strategic town.

It is about 200km (125 miles) north of the provincial town of Pemba and is on the main road that connects the north and south of Cabo Delgado.

South Africa’s private security group, Dyck Advisory Group, is reported to have supported the military in its attack.

According to the government news agency AIM, the militants burnt down homes and the Macomia health centre as well as hoisting an Islamic State (IS) group flag.

There are reports that they went to pray in a local mosque.

Violence began in the region in 2017 when a militant group, known locally as al-Shabab, took up arms. It is not clear whether it has any links to the Somali group of the same name, but recent attacks have been claimed by IS.

The government has appealed for help from other countries in the region.

George Floyd death: Clashes as protests spread across US