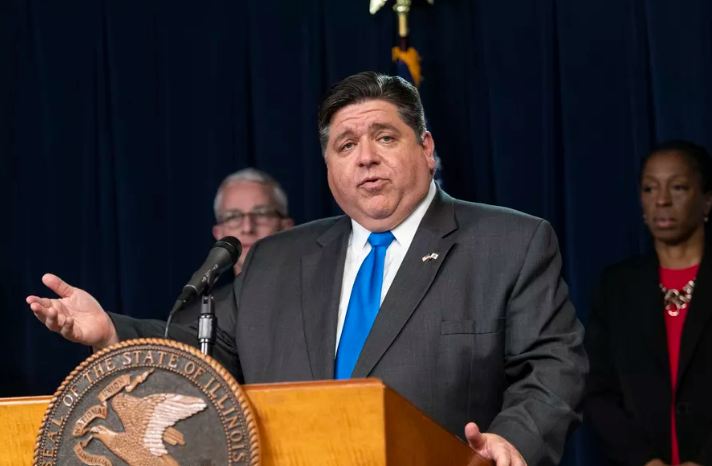 Here’s what we know today about the continuing spread of coronavirus and its ripple effects in Chicago and Illinois.

Illinois health officials on Monday said another 74 people have died from the coronavirus, bringing the state’s death toll to 794. There are also 1,173 new confirmed cases, bringing the total of cases in the state to 22,025.

Here’s what happened in the fight against the coronavirus in Chicago and around the state.

A 17th Ward election judge died from COVID-19 just 15 days after he worked a South Side polling place on Election Day.

Burke was the first city employee known to have died from the coronavirus, but his name was not made public when Mayor Lori Lightfoot announced the death on April 1.

His role as a polling place worker in the Auburn Gresham neighborhood was first reported Monday by Patch.com.

The news reignited the debate about whether Illinois should have proceeded with the primary election after the coronavirus outbreak had been identified as a global pandemic.

At his daily news briefing, Gov. J.B. Pritzker again defended the decision to go forward with the election, saying he had no legal authority under the Illinois Constitution to do otherwise.

“So, I couldn’t shut it down,” Pritzker said, noting he had instead encouraged voters to vote early and vote by mail.

The group partners with local chefs and business owners who pledge to donate meals to a local hospital or health care facility. The organization raises money from donations and grants for the restaurants to be able to pay their staff.

The organization made its first delivery of 175 meals to Lawndale Christian Health Center Monday and will be expanding to deliver more meals to hospitals in Chicago, Off Their Plate spokesman Sean Savett said in a statement.

8:35 p.m. Number of confirmed coronavirus cases tops 2M worldwide
New York’s coronavirus death toll topped 10,000 even as the lack of fresh hot spots in the U.S. or elsewhere in the world yielded a ray of optimism and fueled discussions Monday about how some places might begin to reopen.

The brunt of the disease has been felt most heavily in New York, Italy, France, Spain and the United Kingdom, but grim projections of a virus that would spread with equal ferocity to other corners of America and the world have not yet materialized after more than a month of measures meant to blunt its impact. Even so, the worldwide death toll surpassed 119,000 on Monday.

The death toll in populous states such as Florida and Pennsylvania was on par with some individual counties outside New York City. Houston, the nation’s fourth-largest city and a hub for immigrant communities and business travelers in the energy industry, has been largely spared compared to other parts of the U.S. As Colorado deaths surpassed 300 on Monday, Gov. Jared Polis compared that figure to New York’s thousands and called it “a tragic indication of our success in Colorado.”

Officials around the world worried that halting quarantine and social-distancing measures could easily undo the hard-earned progress that those steps have achieved in slowing the spread.

Still, there were signs countries were looking in that direction.

8:06 p.m. COVID-19 immunity tests in the works — but none accurate enough to roll out yet, official says
Chicago’s top public health official warned Monday that antibody testing used to screen for immunity to the novel coronavirus remains unreliable and that an accurate test may not be approved for weeks.

During a question-and-answer session posted on social media, Dr. Allison Arwady explained that testing for immunity to get an indication of infection at a “population level” is still flawed. That’s because the blood tests can currently return results that are both falsely negative and falsely positive, said Arwady, the commissioner of the Chicago Department of Public Health.

While the Food and Drug Administration has granted emergency approval to a test developed by North Carolina-based Cellex, FDA Commissioner Stephen Hahn warned Sunday that antibody tests being reviewed by the agency “may not be as accurate as we’d like them to be.

Under the judge’s order, the county Health Department must share the names with 911 dispatchers within 24-hours of being notified. Any names received must remain confidential and are to be purged seven days after the Health Department deems a person no longer contagious.

“It’s critical that law enforcement receive this information in a timely fashion so we can keep our officers healthy in order to continue providing the best possible service to our communities,” McHenry County Sheriff Prim said in a statement issued Monday.