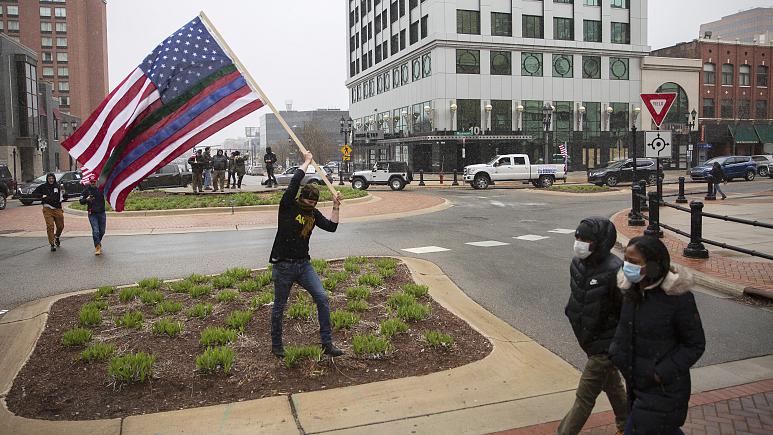 Donald Trump has defended a series of tweets in which he seemed to back protests against coronavirus lockdowns in Democrat-led states.

The US President urged supporters to “liberate” three states with Democratic governors: Minnesota, Michigan and Virginia.

At a White House briefing he said some measures imposed by the states had been “too tough”.

His comments came a day after he laid out a road map giving governors advice on reopening the economy and recovery from the pandemic, which he said would be a “gradual process”.

On Friday Trump tweeted the kind of rhetoric some of his supporters have used to demand the lifting of the orders that have thrown millions of Americans out of work.

“LIBERATE MINNESOTA!” “LIBERATE MICHIGAN!” “LIBERATE VIRGINIA,” he said, adding that this last state was “under siege” in an apparent criticism of attempted gun controls.

There have been protests against the lockdowns in some states, and the president’s tweets are being seen as an attempt to reach out to his political base by backing such action.

Critics accused Donald Trump of trying to foment dissent, jeopardising the battle to contain the coronavirus.

“The president is fomenting domestic rebellion and spreading lies even while his own administration says the virus is real and is deadly,” Inslee said.

Democratic Virginia Governor Ralph Northam said he and his staff are focused on fighting a “biological war.”

“I do not have time to involve myself in Twitter wars,” said Northam, a medical doctor.

The president defended the resources given to New York. But Cuomo responded saying that states cannot begin to return to normal without help from Washington to expand testing.

“The federal government cannot wipe its hands of this and say, ‘Oh, the states are responsible for testing,'” said Cuomo, a Democrat. “We cannot do it without federal help.”

On Thursday, the President outlined a three-step set of guidelines for easing restrictions over a span of several weeks in places that have robust testing and are seeing a decrease in COVID-19 cases, assuring the nation’s governors: “You’re going to call your own shots.”

At least two states under Republican leadership have taken steps towards easing restrictions. But governors of both parties suggested Friday that they would be cautious in returning to normal.

Israel had the coronavirus under control. What happened?

It’s time to talk seriously about the food supply