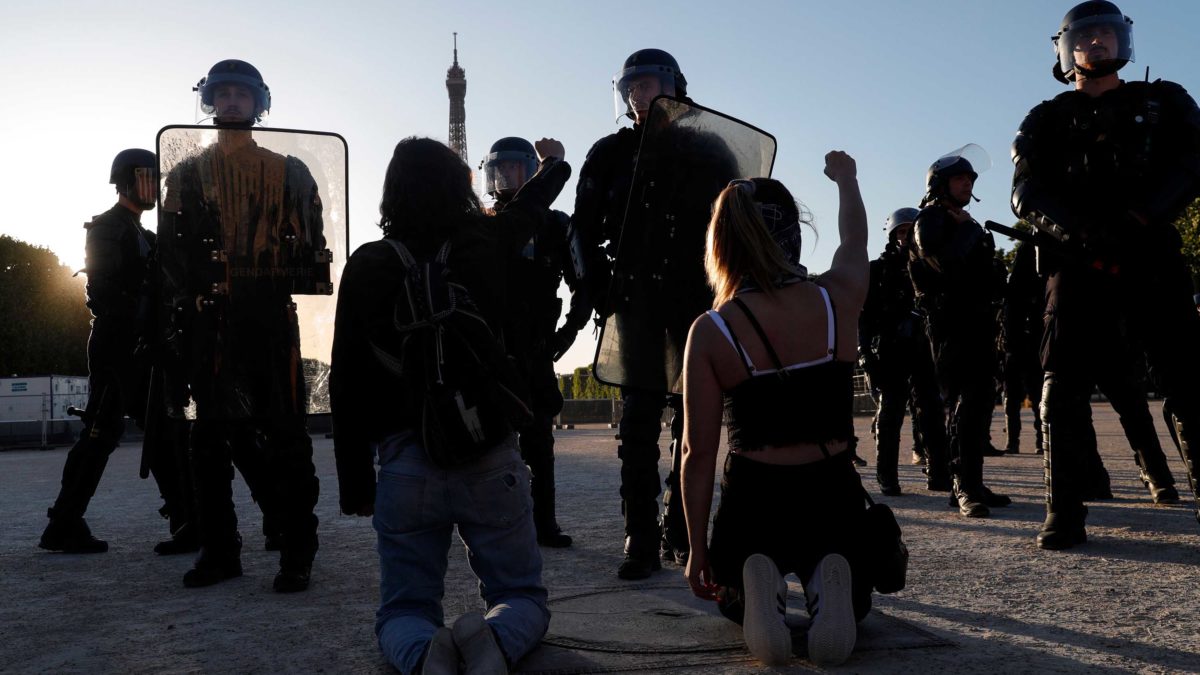 People raise their fists as they kneel in front of riot policemen during a protest at the Champ de Mars, with the Eiffel Tower in background in Paris on June 6, 2020, as part of "Black Lives Matter" worldwide protests against racism and police brutality in the wake of the death of George Floyd, an unarmed black man killed while apprehended by police in Minneapolis, US. - Police banned the rally as well as a similar second one on the Champ de Mars park facing the Eiffel Tower today, saying the events were organised via social networks without official notice or consultation. But on June 2, another banned rally in Paris drew more than 20000 people in support of the family of Adama Traore, a young black man who died in police custody in 2016. (Photo by GEOFFROY VAN DER HASSELT / AFP) (Photo by GEOFFROY VAN DER HASSELT/AFP via Getty Images)

French President Emmanuel Macron has asked the country’s interior minister to look into police violence with a view to improving “the ethics of the police,” according to a government statement.

After last week’s protests, Macron met the prime minister, the interior minister and other officials over the weekend, the Elysée Palace said in a statement early Monday morning.

“The president has asked the minister of interior to quickly complete the work, begun last January, which consisted in making proposals to improve the ethics of the police,” the release added.

There was a 41% increase in internal investigations into police violence between 2018 and 2019, according to a report released on Sunday by the police force’s internal watchdog.

On Tuesday last week, more than 20,000 protesters gathered in front of the main Paris court demanding an end to police violence, and in support of the Black Lives Matter movement in the US following the death in custody of George Floyd.

The organizers of the protests also demanded justice for Adama Traoré, a 24-year-old black French man who died in police custody in Paris four years ago.

Several protests against racism and police violence have taken place all over France in recent days, including three in Paris on Saturday.

All of the demonstrations went ahead in defiance of French authorities, since measures banning gatherings of more than 10 people are in place to prevent the spread of Covid-19.