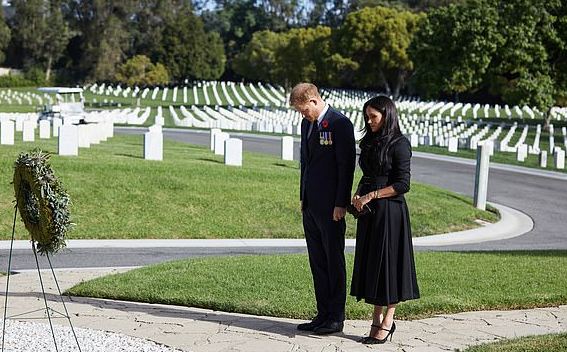 Meghan Markle and Prince Harry’s ‘rift with the royal family is widening’ because they insist on ‘doing things their own way whatever the cost’, royal expert claims
Prince Harry and Meghan Markle now live in Santa Barbara with their son Archie
The Duke and Duchess of Sussex attended Remembrance Sunday in Los Angeles
Shared photographs from visit as Prince Harry’s wreath was snubbed in London
Royal expert Katie Nicholl says this shows the gap between couple and the Firm
Author told OK! magazine that the royal family ‘refuses to bend the rules’Prince Harry and Meghan Markle are growing further apart from the royal family because they ‘do things their own way whatever the cost, while the Firm refuses to bend the rules’, a royal expert has claimed.

Katie Nicholl noted the Duke and Duchess of Sussex’s decision to publicise a visit to Los Angeles National Cemetery on Remembrance Sunday with the help of celebrity photographer Lee Morgan after Prince Harry’s request for a wreath to be laid at the Cenotaph was snubbed.

She told OK! magazine that the display will have only further frayed his strained relationship with the Firm, adding: ‘It highlights the great divide between Harry and the royal family.’

The US reported more than 19,000 coronavirus cases on Monday