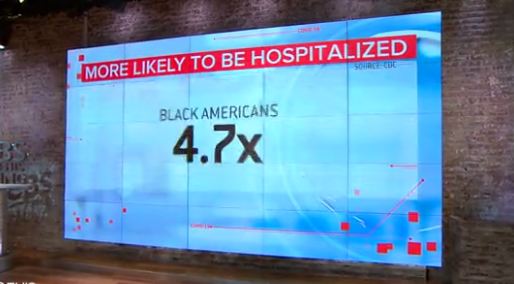 A new study released on COVID-19 research and clinical trials found in all cases that African Americans are underrepresented, despite being disproportionately affected by the virus. While some blame it on mistrust in the health care system, the doctor who performed the study said outreach is partly to blame.

“Under-recruitment is the primary problem,” Dr. Hala Borno, who released the study, told CBS News’ Adriana Diaz. “I think if we invest in engaging with the communities we want to see enrolled in our clinical trials, then trust won’t be the barrier.”

In phase three trials, volunteers test vaccines to see if they work. While Latinos and African Americans represent more than 18% and 13% of the population respectively, they are only 11% and 8% of drugmaker Pfizer’s U.S. trial. Moderna’s trial numbers are slightly better, at 16% and 10%, and they are now actively recruiting minority volunteers. By contrast, Black Americans are 4.7 times more likely to be hospitalized with COVID-19 than White Americans. Latino Americans are 4.6 times as likely.

“The most important reason why I decided to participate is because how impacted my family has been by the COVID-19 pandemic,” Dr. Chris Pernell, who volunteered for a trial said. “This was my way to partly honor my father’s legacy.”

Pernell watched the coronavirus kill her father and infect her sister, a breast cancer survivor who is still recovering. Her family’s struggle pushed her to enroll in a vaccine trial.

When she first enrolled, Pernell said some peoples’ reactions were skeptical, asking her “Are you sure you should do this? Is it safe?”

The doubts are coupled with centuries of systemic racism in the U.S. health care system — the notorious Tuskegee syphilis study saw the government withhold medical treatment from hundreds of Black men from 1932 to 1972 as part of an experiment, even decades after a treatment existed.

“I don’t think that skepticism can be lessened necessarily. I say embrace it and then inform people with the facts,” Pernell said.

Infectious disease expert Dr. Anthony Fauci also expressed concern over the numbers, but warned the issue was about vaccine effectiveness as well as optics.

“We’ve got to get a higher percentage of minorities into the clinical trial so that when we get the data we can say that it applies equally,” he said.

The NIH is funding a media campaign to recruit trial participants — especially minorities. In an effort to dispel centuries’ worth of mistrust in how the U.S. health care system treats these communities, Reverend Edwin Sanders is spearheading an NIH initiative that works with faith-based leaders to disseminate accurate information about COVID-19 treatment.

“What we’re trying to do is to make sure that people have a level of knowledge that allows them to make informed decisions,” Sanders said.

Dr. Borno said making the issue one of mistrust rather than lack of recruitment is an “unacceptable cop-out.” In her study, she found that when Black Americans are engaged, they tend to have high participation rates.

Still, some simply worry about the potential side effects of an unapproved treatment. However, trial participant Dr. Chris Pernell said she was “willing to be” an example for others.

“We need to be able to get at an answer,” Pernell said. “And I want to help us get there.”

Would You Let Government Track Your Smartphone To Help U.S. Reopen Sooner?