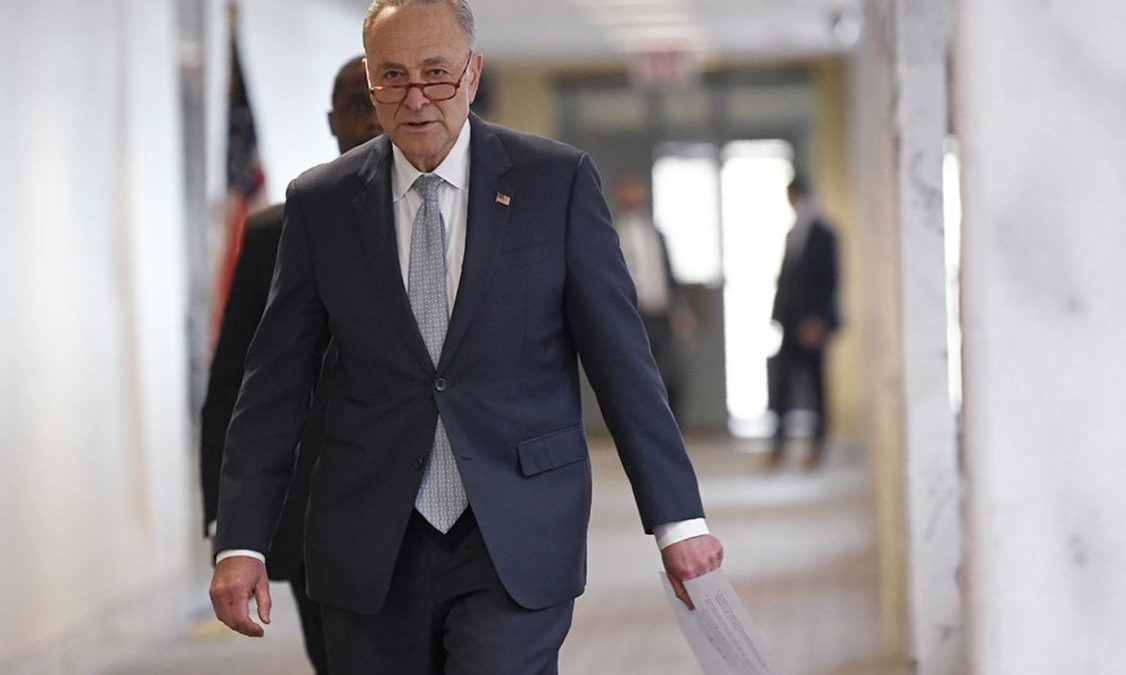 Treasury Secretary Steven Mnuchin and Senate Minority Leader Chuck Schumer said that they are “very close” to an agreement on a nearly $2 trillion coronavirus economic rescue package, raising the possibility of a Senate vote on the legislation as early as Tuesday.

Following a series of late-night meetings in Schumer’s office in the Capitol — and a phone call with President Donald Trump to review the status of the discussions — Mnuchin and Schumer told reporters around midnight that they hope to have the final agreement in place in the morning.

“There are still documents that are going to be reviewed tonight and turned around, there’s still a couple of open issues, but I think we’re very hopeful this can be closed out tomorrow,” Mnuchin said.

While Trump had sent a late-night tweet that appeared to slam House Democrats over the demands for the rescue package, Mnuchin claimed it wasn’t related to his own discussions with Schumer.

“I think the president was commenting on a lot of issues the House has added in that they’d like to have,” Mnuchin added. “We’ve been speaking to the president. We probably spoke to him 10 times today. We kept him involved in all the details and where we are … We’re working at his direction and the president would like to have a deal.”

Schumer, who has been consulting closely with Speaker Nancy Pelosi (D-Calif.) throughout the talks, said, “We expect to have an agreement tomorrow morning. We still have a few little differences, but neither one of us expect it will get in the way of a final agreement.”

According to three sources, Mnuchin had agreed to a key Democratic demand for “strict oversight” over a $500 billion “Exchange Stabilization Fund” designed to lend money to corporations and municipalities. Senate Democrats had attacked the entity as a “slush fund” under the initial Senate GOP proposal, which had no congressional regulation and allowed Mnuchin to withhold information on who received loans for six months.

Schumer also said Mnuchin had agreed to a “Marshall Plan” for hospitals to help respond to the growing coronavirus crisis. Senate Republicans had offered $75 billion for hospitals, but Schumer and Pelosi sought hundreds of billions in additional funding.

The late-night optimism came after a day of partisan squabbling, with bitter exchanges over the delay in completing work on the emergency rescue bill spilling onto the Senate floor Monday.

For the second day in a row, Senate Democrats defeated a key procedural vote even though Majority Leader Mitch McConnell (R-Ky.) aggressively pushed for a deal by Monday. Every Democrat voted against moving forward except Sen. Doug Jones (D-Ala.). McConnell is scheduling another cloture vote for Wednesday.

Despite the hurdles, Schumer and Mnuchin insisted throughout the day that they were nearing a deal on a package that would help blunt the economic fallout of the coronavirus crisis. Mnuchin has spent days shuttling between McConnell and Schumer’s offices on the second floor of the Capitol, but that hasn’t gotten the two sides to an agreement yet.

“Well I think right now, things are stalled out. They could get kick-started, but my sense is that we’re not making a lot of progress today, so I assume we’re here tomorrow,” Thune said. “I think if they could get the list of things down to a handful of items that really need to be negotiated, that would be great. “I just think the Dems are consistently bringing new demands in.”

With tensions running high and tempers flaring in the Capitol, McConnell scolded Senate Democrats for blocking the bill, which he said has delayed negotiations to the point where a final vote could be delayed until Friday or Saturday.

“While people are losing their jobs, losing their income, and shutting down the economy, which we have had to do to deal with this public health crisis, they are fiddling around with Senate procedure that could, if one senator objected, take us all the way to the end of the week to solve this problem,” McConnell said. “I’m beginning to think our Democratic colleagues don’t understand the procedures of the Senate.”

Minutes after the Senate’s failed vote, Pelosi announced from the other side of the Capitol that House Democrats will unveil their own version of a coronavirus package, raising further questions about whether Congress would be able to overcome the partisan divide to aid Americans facing a public health and economic emergency.

Pelosi said the House Democrats’ package — which came in at 1,400 pages and $2.5 trillion — would focus on immediately helping people in need through direct payments, expanded unemployment insurance, a child tax credit and earned income tax credit, among other measures. Other initiatives included reducing student debt and boosting food stability programs.

Some of the ideas would be major sticking points with Republicans: The bill, for example, would invest money “to eliminate high-polluting aircraft” and “research into sustainable aviation fuels.”

And Democrats would create a “COVID-19 Stimulus Accountability and Transparency Board,” a nod to the 2008 bailouts that progressives saw as lacking safeguards. It would extend the status or work authorization for so-called Dreamers, as well as people in the Temporary Program Status program.

“We must be bold and forward looking in our thinking,” Pelosi said, describing the outbreak as “one of the most serious health and economic emergencies out nation has ever faced.”

Asked about a House floor schedule, Pelosi said she “hoped” that the House would vote on a package this week: “That is a hope yes, but we’ll see what the Senate does.”

And both Pelosi and Schumer sought hundreds of billions of dollars in additional spending for hospitals and state and local governments. Republicans have yielded some ground on these issues — the latest GOP proposal included $75 billion for hospitals — but Democrats want far more.

MOST READ
Bernie Sanders
Sanders wins Democrats Abroad primary
House panel warns coronavirus could destroy Postal Service by June
Shareholder suit accuses Sen. Richard Burr of securities fraud
‘Our country wasn’t built to be shut down’: Trump pushes back against health experts
Poll: Half of Americans approve of Trump’s coronavirus response
Democrats are also arguing that the package doesn’t do enough to prevent layoffs and that a two-year time frame on executive compensation limits is not sufficient.

In addition, Democrats are pushing for unemployment provisions to last four months instead of three and include independent contractors.

But Republicans countered that Democrats are slow-walking any agreement while seeking inclusion of extraneous provisions onto the package that have nothing to do with the coronavirus outbreak, like fuel emission standards for airlines and more wind and solar tax credits.

“Democrats won’t let us fund hospitals or save small businesses until they get to dust off the Green New Deal,” a visibly irritated McConnell said. “This has got to stop. And today is the day it has to stop. The country is out of time.”

As the negotiations dragged into another day, tensions on the Senate floor soared as lawmakers berated each other for the delays.