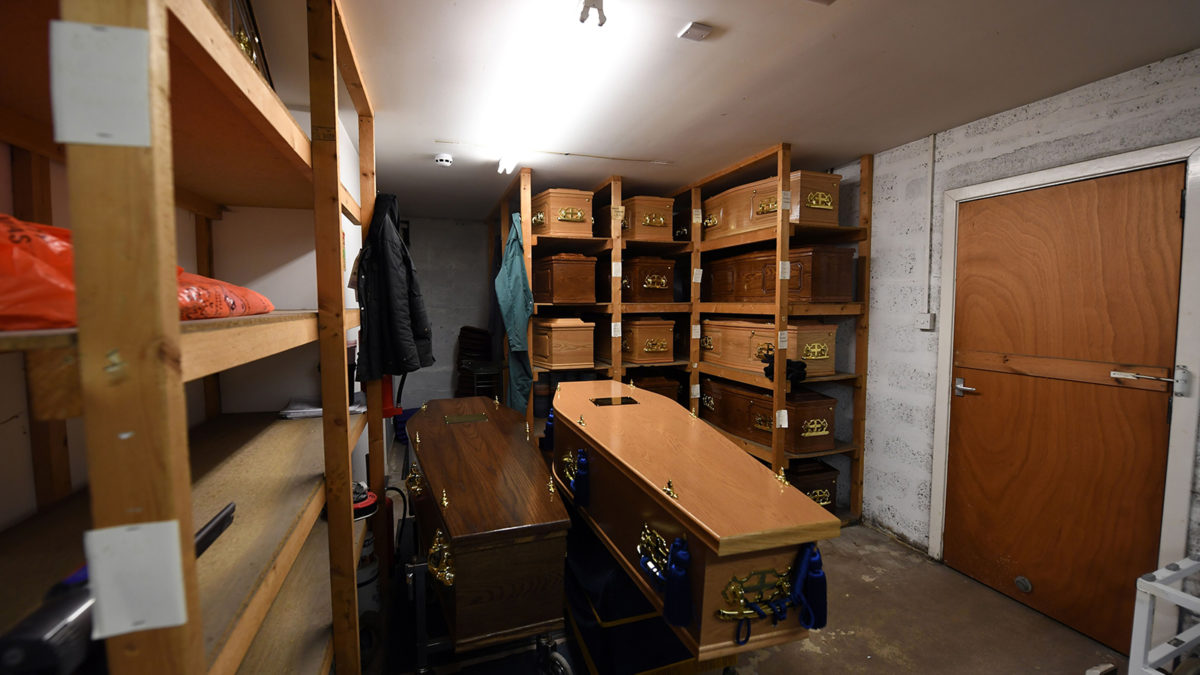 Coffins are seen in the mortuary at Emslie S. Collier and Son Funeral Directors in Montrose, east Scotland on May 4, 2020, ahead of the funeral service of care worker Janet Livingston, 60, who died of COVID-19. - Janet Livingston, a 60-year-old care worker, fell ill nearly three weeks ago after she returned home from a shift at a care home where three people had been infected with COVID-19. Despite initially testing negative for the virus she developed a high fever of 39 degrees and difficulty breathing. She died of COVID-19 in hospital with her 25-year-old son Jamie at her side. Jamie then had to go directly home to self-isolate for two weeks at his home in the coastal village called Ferryden in east Scotland, emerging to attend Janet's funeral on May 4, 2020. (Photo by Andy Buchanan / AFP) / AFP PHOTO ESSAY BY ANDY BUCHANAN (Photo by ANDY BUCHANAN/AFP via Getty Images)

More than 42,000 people have died from coronavirus in the United Kingdom, according to data released by England’s office of national statistics and numbers published by NHS England.

According to the provisional data, at least 42,402 people have died from the disease since the outbreak started in the United Kingdom.

The latest numbers from England’s Office of National Statistics, comprising data collected by institutions across the four UK nations, indicate that there were 41,020 deaths where Covid-19 was mentioned in the death certificate up until May 8.

In addition to these deaths, between May 8 and May 18 inclusive, 1,382 people died after testing positive for Covid-19 in hospitals in England.

The number is considerably higher than that reported by the UK Government’s Department of Health and Social Care of 34,796.

More about these figures: The total people figure number does not include deaths from the novel coronavirus in hospitals in Northern Ireland, Scotland or Wales between May 2 and May 11, nor does it include people who may have died from COVID-19 in care homes during that same period, in any of the four UK nations.

Data from the ONS includes all deaths where Covid-19 is mentioned in the death certificate and differs from the numbers published by the Department of Health and Social Care, which include only deaths occurring among those who have tested positive for Covid-19.

WHO chief affirms commitment to “transparency, accountability and continuous improvement”