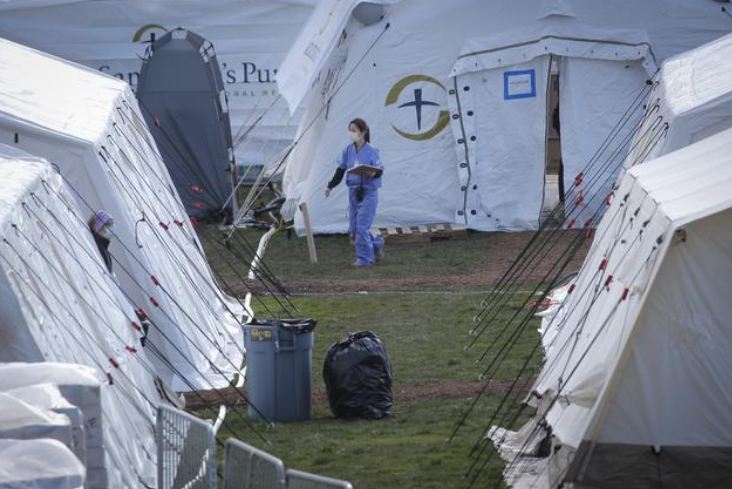 LOS ANGELES (Reuters) – Four new states imposed sweeping stay-at-home directives on Wednesday in response to the coronavirus pandemic, putting over 80% of Americans under lockdown as the number of deaths in the United States nearly doubled in three days.

The governors of Florida, Georgia, Mississippi and Nevada each instituted the strict policies on a day when the death toll from COVID-19 shot up by 925 to more than 4,800 nationwide, with 214,000 confirmed cases, according to a Reuters tally.

President Donald Trump said he saw no need for the federal government to issue a nationwide decree, with 39 states and the District of Columbia now requiring residents to stay home except for essential outings to the doctor or grocery store.

He also told a White House briefing on Wednesday he was considering a plan to halt flights to coronavirus hot spots.

“We’re certainly looking at it, but once you do that you really are clamping down on an industry that is desperately needed,” Trump told a White House news briefing.

Such a plan might conceivably shut down traffic at airports in hard-hit New York, New Orleans and Detroit.

White House medical experts have forecast that even if Americans hunker down in their homes to slow the spread of COVID-19, some 100,000 to 240,000 people could die from the respiratory disease caused by the coronavirus.

A Pentagon official who spoke to Reuters on condition of anonymity said the U.S. Department of Defense was working to provide up to 100,000 body bags for use by civilian authorities in the coming weeks.

‘We are all in this together’ – Gates