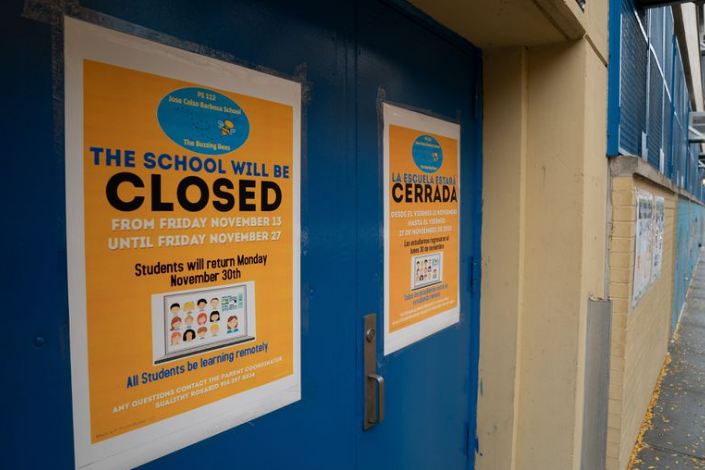 When the city school system shut down Wednesday afternoon for winter break, hundreds of buildings were already temporarily closed because of multiple COVID-19 cases, according to Education Department data.

Nearly 230 buildings were in the midst of a two-week closure as of Wednesday, and another 43 were closed for daylong investigations.

Buildings are initially closed for 24 hours for an investigation, and if contact tracers can’t find a link between the cases, the school is closed for two weeks.

Officials have said the increase in temporary closures is a byproduct of keeping school buildings open amid higher levels of community spread.

“As schools came back recently, we certainly saw the challenges of the second wave and more cases,” Mayor de Blasio said Tuesday. Officials have also increased the level of random testing in schools to help catch a higher percentage of asymptomatic student and staff cases.

The 272 closed buildings include all three types of schools, but Education Department officials couldn’t immediately specify how many of the closures came from each group. Buildings can include multiple schools, and it wasn’t immediately clear how many individual schools were temporarily closed Wednesday.

“Public health officials do not find schools pose any greater risk of COVID-19 transmission to students and staff and has not been the source of any widespread outbreaks,” added Education Department spokeswoman Miranda Barbot.

“We … do not hesitate to enact a temporary building closure in order to stop any potential spread within the school community,” she added.

But the temporary closures, which often come with little notice, can be jarring for kids and staff yearning for stability — forcing parents to rearrange work schedules and teachers to switch up their lesson plans.

Jay Varma, the mayor’s senior health adviser, acknowledged in a recent town hall for city parents that the closures “are very disruptive.”

“But we also feel that they’ve actually probably contributed to preventing outbreaks in schools because we’re taking such swift action,” he added.

De Blasio said Tuesday he’s open to beefing up the staff at the multiagency situation room that keeps track of positive staff and student cases and notifies schools of temporary closures to keep up with the rising number of cases.

Trump leaves town for Christmas at Mar-a-Lago as Democrats plan to vote on $2,000 stimulus checks

How long does it take to recover from coronavirus?