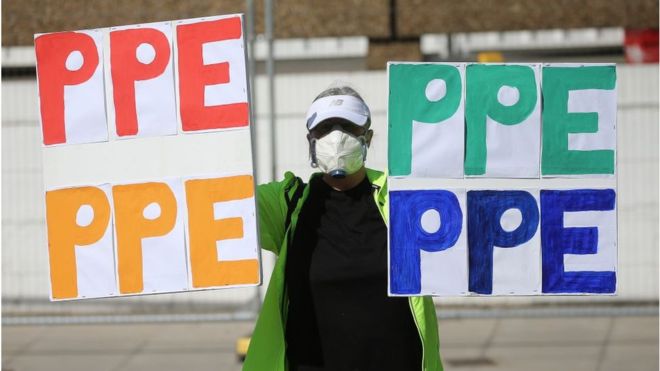 NHS boss: ‘I need gowns, can I call Burberry?’

The director of a large NHS trust has contacted the BBC asking for the phone numbers of Burberry and Barbour because he does not have enough gowns for his staff working on coronavirus wards.

He said his trust has “less than 24 hours supply and [with the] weekend coming up” he was hugely concerned.

The BBC is not disclosing his name or the trust he runs.

The Department of Health said it was working “around the clock” to provide protective equipment where needed.

For a number of weeks, Prime Minister Boris Johnson and government ministers have said during press briefings and interviews that Burberry will begin making personal protective equipment (PPE) on behalf of the government as one of the answers to a critical shortage.

Burberry said at the end of March it would repurpose its trenchcoat factory in Castleford, West Yorkshire, to make non-surgical gowns and masks for hospital patients.

The government has been criticised for not providing enough PPE for NHS and other care workers to protect them while looking after patients with the virus.

Latest statistics revealed the UK recorded another 861 coronavirus-related deaths in hospital, taking the total to 13,729. The overall figure does not include hundreds more who have died in residential and nursing homes.

On Thursday, as Foreign Secretary Dominic Raab announced the extension of lockdown restrictions for “at least” another three weeks, he said there remained “issues with the virus spreading in some hospitals and in care homes”.

Among five conditions he said must be met before curbs on daily life could be lifted were making sure the NHS could cope and ensuring PPE supplies could meet demand.

Last week, Health Secretary Matt Hancock said there was “enough PPE to go around, but only if it’s used in line with our guidance”, adding there was a “huge task” to make sure those who need it get it.

However, on Monday, Chris Hopson, from NHS Providers in England which represents hospital trusts, said it was “all really hand-to-mouth in terms of gown delivery” and called for a “more sustainable” supply.

And on Wednesday the NHS Trust director told the BBC: “The official line that we don’t have a shortage of PPE is fantasy.” 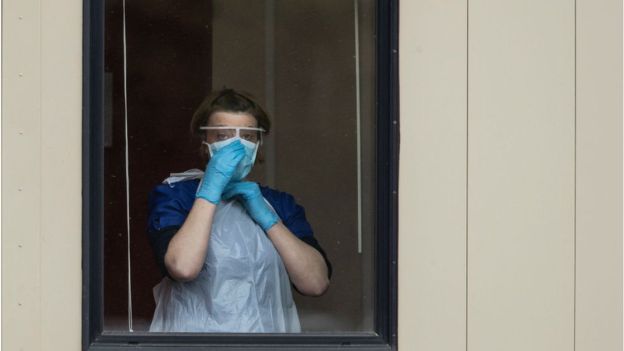 A gown is a piece of PPE used to protect the body of those who might come into contact with coronavirus.

It should be made of water-resistant material and have long sleeves. If the gown is not water resistant, a waterproof apron is needed underneath to protect the wearer from droplets containing the virus.

The shortage of non-surgical gowns is a critical problem facing the NHS as it struggles to secure enough kit for frontline staff.

The situation at this particular trust is so critical that single use PPE is being reused.

A leaked Public Health England document this week advised health workers to reuse protective gowns and masks only as a “last resort”.

The boss added “Trusts are already decontaminating PPE for reuse. I have several examples”.

In messages and phone calls that followed, the NHS boss said that they were investigating using hydrogen peroxide, normally used as bleach, to sterilise PPE, including masks.

Supply problems
As the world fights coronavirus, the demand for gowns is unprecedented and at levels never seen before.

Almost all of the UK’s supply of gowns used by the NHS is made in China and the Far East.

These decisions have been driven by cost, as all sectors seek the cheapest prices.

But as every country in the world fights for finite supplies, a UK solution has been sought.

They also requested that UK manufacturers complete a survey to share what they could make.

Earlier this week, Barbour began distributing gowns from its factory in the north east of England.

Burberry is still making the final adjustments to its factory and production is expected to start next week.

Getting a supply chain formalised using UK factories has been difficult.

UK garment factories approached by the BBC have said the government doesn’t fully understand what is possible in the UK, and which firms could produce what. This lack of understanding has caused production delays.

Delays around certification of gowns for use is also slowing down the manufacturing process.

Some factories say it could be another two weeks before the necessary paperwork is signed off and they can manufacture the gowns.

On Wednesday afternoon the NHS boss offered to write a letter to a factory, issuing a certificate that would absolve the factory of liability if anything happened with the use of an uncertified gown, such was his desperation for equipment. However, the factory felt this was too dangerous.

This comes as factories around the UK are empty. Machinists and pattern cutters have been sent home and furloughed.

To add to the frustration of factory bosses, they say they’re getting upsetting calls from NHS hospitals and workers begging for gowns.

‘Working around the clock’
A Department for Health and Social Care spokesman said: “Adequate supply of protective equipment is an international issue facing many countries during this global pandemic.”

Nearly one billion pieces of protective equipment had been delivered to the frontline so far, the spokesman said.

“There is also a 24 hour NHS-run helpline where NHS and social care workers can call to report supply disruption.

“We continue to work around the clock to give the NHS and the wider social care sector the equipment they need and it is crucial the guidance for protective equipment is followed closely,” the spokesman added.