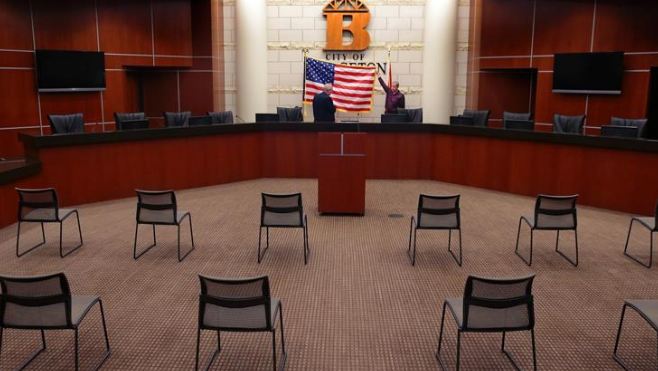 RIDGETON — When sales taxes collected by the state make their way back to local governments in a few weeks, officials will have hard data to substantiate what they already know.

It’s going to be bad.

In Bridgeton, they’re already imposing a hiring freeze and suspending the travel budget. As the nation hunkers down to slow the spread of the new coronavirus, no one’s going anywhere anyway.

“We’re delaying a purchase even tonight — we had it on the agenda — of a mower for our parks department,” Bridgeton Mayor Terry Briggs said Wednesday. “It’s like a $50,000 expense.”

In Des Peres, the closure of the West County Center mall will cost the city maybe $500,000 a month in lost revenue, City Manager Douglas Harms estimates.

“We’ve done like everybody else,” Harms said. “We’ve imposed an immediate hiring freeze. We’re scrutinizing all existing budgets and we’re going to be sequestering monies to only essential purchases. But our budget is 71% payroll.”

“Clearly, sales tax in the region and in this town is going to take a big hit,” he added. “We just don’t know how big.”

For most of the 100-plus municipalities in the St. Louis region, the lifeblood of the budget is sales tax. And when no one’s going to restaurants or shopping at malls, the hit is sure to trickle down to the public services — from police to potholes — for the region’s 2.8 million residents.

Unlike school districts and fire protection districts, which rely on property taxes that take longer to reflect economic shifts, local cities and counties are far more reliant on taxes tied to a service sector devastated by stay-home orders intended to limit COVID-19. Some cities in St. Louis County don’t impose a property tax at all.

More affluent municipalities with a cushion of reserves may be able to weather a few months of substantially lower sales tax revenue, but those that were already in poor financial shape will struggle — and may even be forced to merge or dissolve.

Missouri and its local governments are especially exposed to this crisis. Unlike 48 other states, Missouri’s GOP-dominated legislature has not passed a bill to collect online sales tax as allowed by the U.S. Supreme Court’s 2018 Wayfair decision. Conservative lawmakers insist any such collection must be offset with state income tax cuts, and the prospects of a bill bringing the state in line with the rest of the country are up in the air along with Missouri’s legislative session.

And many shoppers may be newly comfortable with e-commerce after being confined to their homes for months. “This is going to be more than just a couple-month dip — we’re very cognizant that this might be a change permanently in how Americans do commerce,” said Ferguson Mayor James Knowles III. “No community in Missouri is going to be able to live with the same amount of services under the old taxation regimen that we have here in the state.”

Illinois differs
In Illinois, cities are far more reliant on property taxes, and even receive a share of state income taxes. About a quarter of Belleville’s revenues, for instance, come from sales taxes, compared to about 60% in Des Peres, 68% in Chesterfield and 52% in Maplewood.

Belleville Mayor Mark Eckert said Illinois cities fought to get the state legislature to bring the state in line with the Wayfair decision and collect online sales tax.

“We’re starting to see some of that use tax come back to us now,” Eckert said. “That’s been a godsend.”

Municipal leaders in the St. Louis area are holding out hope that the Missouri Legislature, when it reconvenes to pass a state budget, can make time to try to pass the online sales tax collection bill. But it’s unclear whether legislators will want to negotiate other bills.

“Certainly, Wayfair is something we need to pass and I’m hopeful that we can try to get it done,” said Sen. Andrew Koenig, R-Manchester, who has sponsored an online sales tax bill. “I’m not certain if we’re going to have the time to do it or not.”

Koenig said his bill won’t pass without the income tax reduction trigger. The Municipal League of Metro St. Louis is supportive, as a way to finally resolve the issue, said Pat Kelly, the group’s director.

But cities shouldn’t count on that to cushion the initial blow from COVID-19, Kelly said.

“Even if Wayfair was to pass this summer, you wouldn’t see those revenues coming in, at the earliest, until January,” Kelly said. “It would be a good thing, but it’s not going to save the day at this point.

“I’m telling people they ought to anticipate at least a 50% reduction in sales.”

Even the city of St. Louis, unique in the region because of its local earnings tax, gets about one-third of its budget from sales taxes. Last year, sales taxes actually edged past earnings taxes as the single largest general revenue stream, primarily because of new sales taxes passed to fund police and economic development.

City officials have said they anticipate a shortfall of $55 million to $63 million for the fiscal year ending in June.

Uncertain outlook
If the stay-home orders are lifted in a month or two, many people, fearing new outbreaks, are likely to remain wary of shopping in stores until there’s a vaccine ready, said Terry Jones, a University of Missouri-St. Louis professor emeritus who studies local governance and has consulted for many municipalities.

Jones estimates most municipal governments can weather three to six months of the shutdown. Yet that would “exhaust their reserves” and potentially put them at odds with bondholders that expect a certain amount of spare cash to be in the bank. Others are in worse shape.

“Somewhere between 10 and 20 percent of St. Louis County’s population are living in municipalities that do not have that comfortable a level of reserves,” Jones said.

Many area municipalities could raise property taxes, though that would require a vote of residents. Cutting services would be difficult, he said.

“For the most part, I do not know of a municipality in the region that is overserviced,” Jones said. “Citizens will notice cuts in services very quickly.”

In Pine Lawn, one of the area’s poorer municipalities that already needed to borrow money last year from nonprofit Beyond Housing to pay bills, about 62% of general revenue comes from sales taxes. Mayor Terry Epps said the city has been shifting more of its workforce to part-time and contract workers, which has helped it keep costs down and could allow it to quickly reduce expenses.

“We don’t know how big of a hit it’s going to be,” Epps said. “We’ll start cutting the best we can with what we project our revenue will be.”

Knowles, in Ferguson, pointed out that the largest expense of many local governments is payroll, and much of that is for police.

Some municipalities are already hoping Congress will step in with another stimulus bill, one that gives more aid to smaller local governments. The recovery act signed by President Donald Trump last month limits direct aid to local governments with over 500,000 people, and the money is only to reimburse COVID-19 related spending, not regular expenses.

Without federal aid, the region’s many small municipal governments, jealous of their autonomy, may need to consider what the Great Recession, post-Ferguson court reform and the Better Together effort all failed achieve.

“Some cities will seriously talk about how they can share services,” said the municipal league’s Kelly. “Others may have to either merge with another city or look to the county and become unincorporated.”

Disincorporation, though, would mean St. Louis County takes on the role of local service provider — and, with 47% of its revenue coming from sales taxes, it is almost as reliant as the munis. St. Louis County Executive Sam Page has already instituted a hiring freeze and put a halt to spending unrelated to the crisis.

Dissolving doesn’t solve the problem, said UMSL’s Jones. It just kicks it up to the county.

In the meantime, cities are hoping for the best, and doing what it takes to survive.