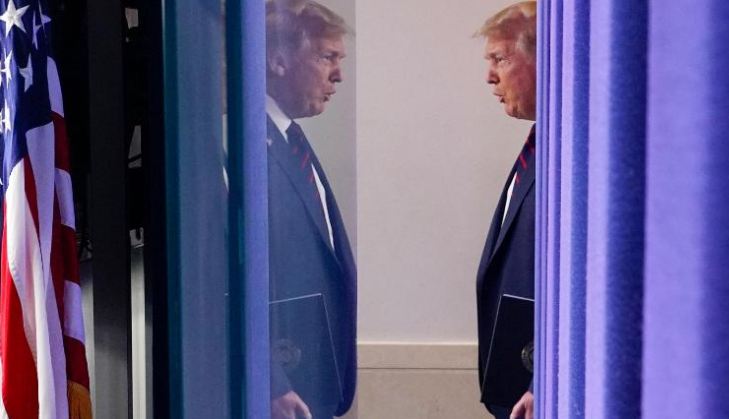 President Donald Trump’s top government experts now say that the pandemic is entering a new phase as it invades the rural heartland — and they can’t say how long it will last.

With millions of kids nowhere near going back to school and the economy reeling from a 32.9% annualized contraction in the second quarter, the months ahead are stretching into what looks like an endless crisis as Trump tweets “Make America Great Again” and spends his weekends on the golf course.
Top administration officials in recent days have repeatedly delivered information and warnings that directly contradict Trump’s upbeat messaging on Friday on the virus: “We’ll get rid of it, we’ll beat it, and it will be soon.”
View Trump and Biden head-to-head polling
Amid this grim outlook, the administration and Capitol Hill Democrats are deadlocked on a plan to extend federal unemployment payments to millions of Americans who lost their jobs in lockdowns.
And Trump finally turned his ire at Dr. Deborah Birx on Monday morning, after the coronavirus task force coordinator acknowledged America’s grim reality on the battle against the pandemic over the weekend. She had previously avoided both a raw assessment of the virus and therefore the President’s wrath.
Trump tweeted Monday morning that Birx had “taken the bait” after House Speaker Nancy Pelosi had criticized Birx for offering what the California Democrat considered rosy and misleading assessments.
“In order to counter Nancy, Deborah took the bait & hit us. Pathetic!” Trump tweeted.
Birx had delivered a series of stunning warnings on CNN’s “State of the Union” five months into a pandemic that the President once said posed no threat to Americans but has now killed more than 150,000 of them.
“What we are seeing today is different from March and April. It is extraordinarily widespread. It’s into the rural as equal urban areas,” Birx, the White House coronavirus task force coordinator, told CNN’s Dana Bash.
Birx even suggested that some Americans in multi-generational families should start wearing masks in their home and assume that they already have the disease. She did not reject a warning by former Federal Drug Administration Commissioner Dr. Scott Gottlieb that there could be 300,000 coronavirus deaths by the end of the year, saying, “Anything is possible.”
“To everybody who lives in a rural area, you are not immune or protected from this virus,” Birx said. Her comments came after her colleague, Dr. Anthony Fauci, told a House committee on Friday it was “unclear” how long the crisis will last. But the US Centers for Disease Control and Prevention told Americans to brace for an average of 1,000 deaths a day for the next 30 days.
And while there are some signs that infections have plateaued in sunbelt states in the last week, albeit at high levels, Birx’s words suggest new epicenters are looming, a situation hardly consistent with Trump’s description of “embers” of infection.
The President speaks optimistically about a coming vaccination — though experts say it could still be months away — and boasts about advances in therapeutics and of building thousands of ventilators. But the horrible statistics of the pandemic are relentless with 1,000 Americans dying almost every day. And the administration response appears — as it has from the start — short of the scale needed to beat back the worst public health crisis in 100 years.

Europe is distancing itself from the US

Here are the latest developments from tonight’s protests