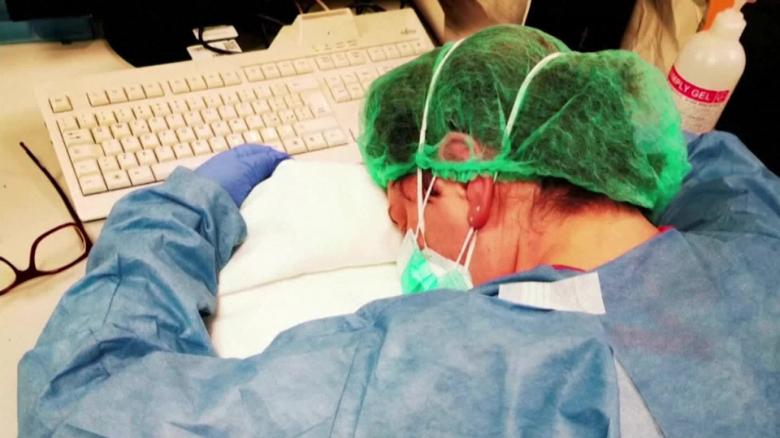 Now the nurses scrub these items clean and wear them for as long as they can. This has them worried, considering how contagious the coronavirus is.

Vincent Crane, 47, of Farmingville, added, “It’s like walking into a fire with nothing on.”

Some of them are isolating themselves from their families at home.

Desmond, a single mother, has a daughter who is staying with her parents. She wore a mask when she saw her daughter on her 8th birthday Saturday.

“Most of us haven’t hugged or kissed our kids in a long time,” she said.

Auteri returned to work from maternity leave March 1 and said she wore a mask at home when she was around her 4-month-old daughter.

It means she can hold her daughter, but with limitations.

“I can’t get too close to kiss her because who knows?” she said. “It’s heartbreaking.”

Still, she said she told her husband she would work until she got sick.

“I feel like I’m on the front line of a war that I didn’t sign up for,” she said. “I came back from maternity leave and it was like, bam, go into the trenches. You have no choice. You’ve got to do it. You have to take care of these people on your shifts. They’re relying on you.”

Some of their fellow nurses have gotten sick with COVID-19. They’re worried they may be next.

Their days are filled with constant anxiety, at home and at work. They try to get through it by reminding themselves of the suffering their patients are going through.

“We try to keep your cool as best you can,” Auteri said. “But deep down inside, I’m so full of anxiety in those rooms.”

Costa said the best way to describe life in the emergency room was “surreal,” as if she was stuck in a dream and none of this was real. She said she often found herself coping during the day by asking her colleagues, “Is this real life?”

“You wake up in the morning with a pit in your stomach,” Costa said. “You don’t know what you’re going to see today. The best way to explain it right now, it looks like a movie. It doesn’t look like our ER that we’re used to. The unknown is scary.”

Crane said the worst part about working amid the virus was the knowledge that it exists all around them. He described it as going to war against an enemy that was invisible. “It’s something you can’t see,” Crane said. “But you know that it’s there.”

He said it was not just nurses that had to deal with this constant anxiety. He said doctors, respiratory therapists, hospital engineers and custodians were there doing their jobs for the good of the patients and hospital staff while dealing with the same anxieties.

The nurses said they shudder when they see people complain on social media about having to stay home. It makes them think about all the sick people they care for. “You’re home and you’re safe,” Costa said. “You’re not in the hospital on life support.”

The nurses also worry what their emotional state will be like when life gets back to normal, whenever that is.

Desmond broke down in tears discussing a conversation she had with her parents. She said she told them, “You’re going to need to help me, because I’m not going to be the same.”

Auteri said when she returned from maternity leave on March 1, the emergency room already had a far different feel from the one she left in October.

There’s now no resemblance to how it used to be.

“It’s really heartbreaking to see what it was and what it is now,” Auteri said. “Will it ever be the same? Who knows? And it’s scary. Because I love being an ER nurse. I love it.

Coronavirus was circulating in France in December, case report suggests