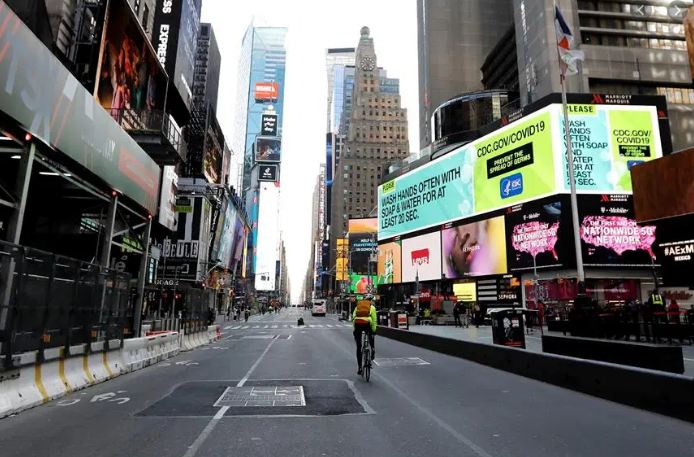 New York City’s progress fighting the coronavirus is doing little to help retailers, who say business in the city that never sleeps has become worse than anywhere else in the country.

National retailers — from Shake Shack, Applebees, and cap seller Lids — say their Big Apple stores are bouncing back slower than even neighboring states like New Jersey and Pennsylvania, which were also hard hit by the coronavirus.

The problem, sources say, is Manhattan, which used to be teeming with tourists and commuters who have largely stayed away since the coronavirus pandemic hit in March. Wealthy Manhattanites also have more resources and flexibility to escape, indefinitely, to greener pastures, like the Hamptons, experts say.

The city’s ghost-town vibe has Shake Shack, which runs 162 restaurants in 20 states, reporting that its Big Apple stores will “take a longer period of time to fully recover than other parts of the country.”

The burger chain made the statement on July 7 as it reported that NYC same-store sales for the week of July 1 had fallen 58 percent compared to a year earlier — the steepest decline among all its regions. Sales in the chain’s Northeast and Southeast stores, by contrast, fell just 24 percent and 32 percent, respectively.

While Shake Shack didn’t mention Manhattan specifically, Zane Tankel, who owns 35 Applebee’s in the NY-metro area, told The Post that he’s reopened 18 restaurants in neighboring regions, including Brooklyn and Queens. But he sees no point in reopening his two Manhattan stores — not even for curbside pickup.

“I drive around the city all the time and it was an easy determination to see that there’s not enough traffic to open those restaurants,” said Tankel, CEO of Apple Metro. Prior to the pandemic, the Manhattan Applebee’s, located at 205 W. 50th St. and at 234 W. 42nd St., were his most productive locations — representing $25 million in revenues.

Macy’s, whose Manhattan flagship occupies over 1 million square feet of retail space, is also concerned. Asked how its NYC stores, which reopened on June 22, are performing compared to the rest of the country, a spokeswoman said it’s too soon to tell while also noting that “continued work-from-home trends mean fewer commuters coming into the city,” and that international and domestic tourism “remains low.”

The bulk of the closed stores, Starbucks said, “are primarily located in the New York City metro area.”

Lawrence Berger, chairman of sports cap company Lids, said he’s been floored by the drop in business at the chain’s two best performing New York stores — 1501 Broadway and 2 Times Square — since they reopened on June 22.

Foot traffic at those stores have been down 85 percent from a year ago — compared with a 20 percent average decline at Lids’ 900 other stores that have reopened across the country, said Berger, a partner of Ames Watson, which bought the 1,200-store chain last year.

Customer traffic at Lids stores in neighboring NJ and Pennsylvania, meanwhile, have actually increased 30 percent from a year ago, Berger added. And they all reopened at the same time.

“We expected New York City to be like the rest of the country when we reopened our stores here, but it’s a complete outlier,” Berger said. “There is no way to make money. It’s not an economically viable situation.”