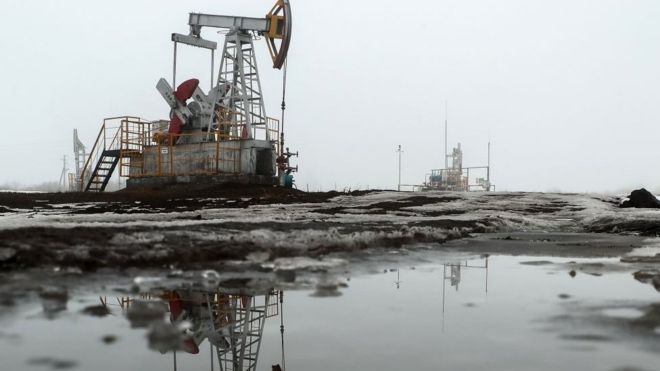 Global oil prices have dropped after Saudi Arabia and Russia postponed a meeting about a deal to cut output as the virus pandemic hits demand.

The two countries have been locked in an oil price war for the last month.

Traders are concerned that, with large parts of the world in lockdown, there will be too much crude available, putting pressure on prices.

Last week, crude prices soared after US President Donald Trump suggested that an agreement was imminent.

Measures in countries across the world to slow the spread of the coronavirus, including the US, UK and much of mainland Europe and Asia, have seen global energy demand fall sharply.

At the same time the month-long oil price war between Saudi Arabia and Russia has left the global market with far more crude than is needed.

The price war came after a deal between the two countries to cut production, in response to the drop in demand, collapsed last month.

That has pushed down prices to lows not seen for almost two decades as traders wait for a new deal to be agreed.

The major oil producing countries were scheduled to meet on Monday, but the meeting has now been pushed back to Thursday.

US oil fell by two thirds in the first three months of the year, as it saw its worst quarter on record.

The huge impact on the American energy sector has prompted Washington to attempt to broker an agreement between Saudi Arabia and Russia.

On Thursday oil prices rose by more than 20%, the biggest one-day leap on record, on signs that an end was in sight for the dispute.

Mr Trump had said he expected the two sides to cut supply, while Saudi Arabia called for an emergency meeting of oil producers.

Coronavirus: The race to stop the virus spread in Asia's 'biggest slum'