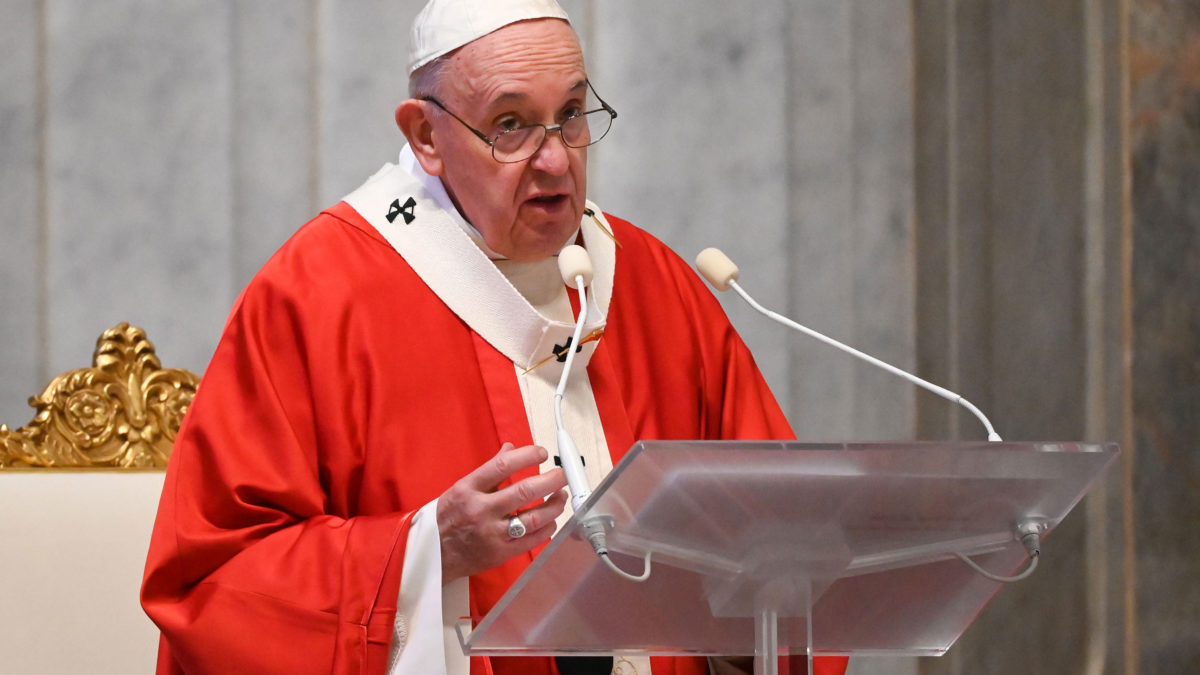 Pope Francis delivers a homily during Palm Sunday mass behind closed doors at St. Peter's Basilica mass on April 5, 2020 in The Vatican, during the lockdown aimed at curbing the spread of the COVID-19 infection, caused by the novel coronavirus. (Photo by Alberto PIZZOLI / POOL / AFP) (Photo by ALBERTO PIZZOLI/POOL/AFP via Getty Images)

The coronavirus outbreak is one of “nature’s responses” to human beings ignoring the ecological crisis, said Pope Francis Wednesday.

“We did not respond to the partial catastrophes. Who now speaks of the fires in Australia, or remembers that 18 months ago a boat could cross the North Pole because the glaciers had all melted? Who speaks now of the floods?” the Pope told British Catholic journalist Austen Ivereigh in an email interview published Wednesday in The Tablet and Commonwealth magazines.

“I don’t know if these are the revenge of nature, but they are certainly nature’s responses.”

Pope Francis also said he is recovering from his bronchitis and praying even more from his residence in the Vatican during this “time of great uncertainty.”

Francis revealed he goes to confession every Tuesday to ask forgiveness for his own selfishness. “I take care of things there,” he said.

Francis said the homeless should be quarantined in hotels and not in parking lots.

“A photo appeared the other day of a parking lot in Las Vegas where they [the homeless] had been put in quarantine. And the hotels were empty. But the homeless cannot go to a hotel,” the Pope said.

“This is the moment to see the poor,” he said, whom society often treats as “rescued animals.”

The Pope warned against the rise of populist politicians, who he said are giving speeches reminiscent of Hitler in 1933, and others who are focusing solely on the economy.

“I am worried by the hypocrisy of certain political personalities who speak of facing up to the crisis, of the problem of hunger in the world, but who in the meantime manufacture weapons,” he said.

“Today I believe we have to slow down our rate of production and consumption and to learn to understand and contemplate the natural world.”

The Pope encouraged people at home on lockdown to find creative ways of being at home.

“Take care of yourselves for a future that will come,” Francis said.

Lockdown or no lockdown, Americans head outside for warm weather