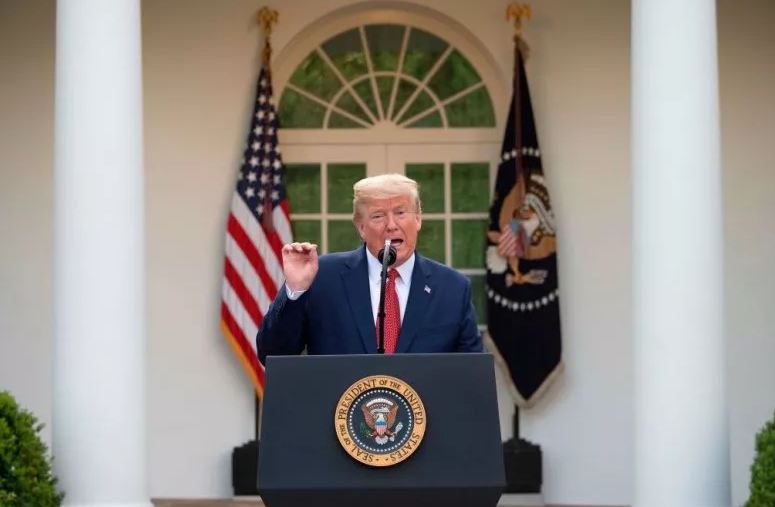 President Donald Trump said during a Coronavirus Task Force news conference Sunday evening from the White House that he is extending social distancing guidelines to April 30. He also said that he expects the death toll to peak in two weeks and America to be in full recovery by June 1.

“The peak for death rates is likely to hit in two weeks,” Trump said. “Nothing would be worse than declaring victory before victory is won.”

Trump said last week he hoped America would be back open for business by Easter Sunday, which is two weeks from Sunday on April 12. However, his comment hints at the death toll from coronavirus will hit its crescendo around Easter.

Also at the news conference was Dr. Anthony Fauci, the director of National Institute of Allergy and Infectious Diseases. “The decision to extend this mitigation process until the end of April, I think was a wise and prudent decision,” he said. “Dr. [Deborah] Birx and I spent a considerable amount of time going over all the data, why we felt this was the best choice of us, and the president accepted it.”

Fauci said the data shows a wide range of deaths, and that the task force did not want to “act prematurely” on lifting any social distancing guidelines. On CNN’s State of the Union on Sunday morning, Fauci said there could be between 100,000 and 200,000 coronavirus deaths in the U.S.

During the news conference, Trump also challenged the media to investigate for themselves how the amount of masks needed annually at one New York hospital went from 10,000 or so to 30 times as many, even questioning if those masks are “going out the back door.”

Trump went on to say he expects the nation to be in recovery a few weeks before the start of summer.

“We hope to be well on our way to recovery by June 1,” Trump said.

COVID-19 is the official name of coronavirus, which was first detected in Wuhan, China in late 2019. Since then, there have been over than 720,000 people worldwide who tested positive and more than 33,000 deaths, according to the Johns Hopkins University tracker. There have been 149,000 recoveries.

The United States leads all countries with nearly 140,000 positive cases, and the U.S. has more than 2,400 deaths related to coronavirus.

What’s happening in the US and Canada?