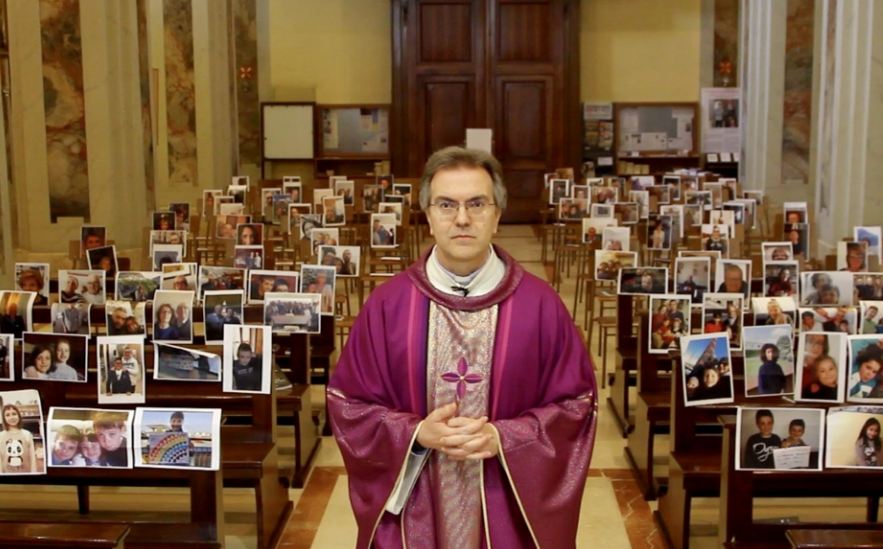 ROBBIANO, Italy — Giuseppe Corbari got tired of hearing his voice bounce off the walls of the empty church of Santi Quirico e Giulitta a Robbiano di Giussano.

So he asked his congregation to send in pictures of themselves, which he stuck onto the empty pews. Come Sunday, the church will have a congregation — of sorts — and he will celebrate Easter not quite alone.

“It’s not like having people face-to-face here attending the mass,” Corbari, 50, said. “But as soon as I see a face in the photo, I think about what that person must be going through in the lockdown.”

Corbari’s workaround came about after Italy’s government in February imposed strict restrictions on movement in a desperate bid to halt the deadly coronavirus outbreak. Now, with thousands of churches around the world sitting empty, the Catholic Church is trying to find ways to bring people together but also to keep them apart on this the holiest day of the year for Catholics.

In Italy, the country hardest hit by the pandemic with close to 20,000 deaths, families are usually reunited on Easter Sunday, as well as on the following Monday – “La Pasquetta” – which is spent in groups often in the countryside or in parks.

With these sorts of gatherings being illegal this year and to help the faithful cooped up at home, the Vatican has already started livestreaming hours of Pope Francis’ Mass, mostly served in solitude, on its social media channels.

The pope, the leader of the world’s 1.3 billion Catholics, has said he has been intensely praying for the victims and those fighting the virus on the front lines, urging love and tolerance in difficult times.

“The pope is making an effort to make himself present by showing that he is praying with us,” said the Rev. Robert Gahl, an American priest and an associate professor of ethics at the Vatican-affiliated Pontifical University of the Holy Cross in Rome.

He walked alone in the rain to a white canopy on the steps of St. Peter’s Basilica and spoke sitting alone before the square, which is normally filled with tens of thousands of people but now empty because of the pandemic.

“We were caught off guard by an unexpected, turbulent storm,” he told the faithful watching his address online or on television. “We have realized that we are on the same boat, all of us fragile and disoriented, but at the same time important and needed, all of us called to row together, each of us in need of comforting the other.”

On Palm Sunday, which opens the Holy Week, the pope celebrated a Mass in the nearly empty St. Peter’s Basilica, with no usual crowds waving palm fronds in St. Peter’s Square.

On Thursday, the pope would have been joined by around 10,000 from around the world for the Mass of the Lord’s Supper at the basilica. Instead, he presided over a scaled-down ceremony in an empty St. Peter’s Basilica, and praised doctors, nurses and priests who risk their lives helping coronavirus victims, calling them “the saints next door.”

So the crisis has upended daily life here, as it has in so many other places, but some see glimmers of hope in the midst of the crisis, according to Gahl.

“Despite the suffering and hardship of this pandemic, we can still find opportunity for joy and for grace,” he said. “God is certainly seeking us out within our hearts.”

These sneaky golfers have got some balls during coronavirus lockdown

Coronavirus likely to come back each year, Chinese scientists say