Probably will ‘get worse before it gets better’: A solo Trump at pandemic briefing 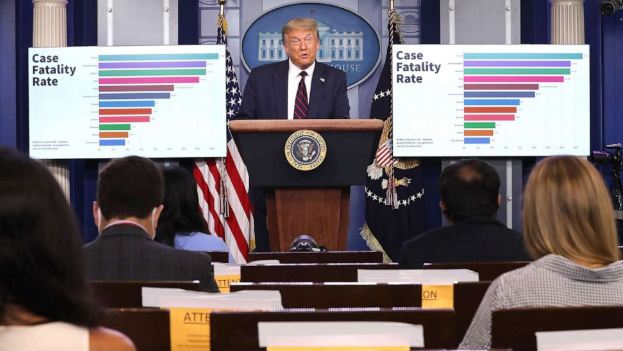 President Donald Trump held his first press briefing focused on the coronavirus crisis in nearly three months on Tuesday — by himself — without any experts from the White House task force.

“Today, I want to provide an update on our response to the China virus, and what my administration is doing to get the outbreak in the Sunbelt under control. Seems largely in Sunbelt but could be spreading,” Trump said to open the briefing amid polls showing Americans sharply disapproving of how he’s handled the crisis.

Comparing the U.S. to the rest of the world, he downplayed the impact of the pandemic on Americans by emphasizing it’s a global problem, but he also made a rare acknowledgment of bad news ahead.

“It will probably unfortunately get worse before it gets better. Something I don’t like saying about things but that’s the way it is. It’s the way — it’s what we have. You look over the world. It’s all over the world. And it tends to do that,” he said.”If you watch American television, you’d think that the United States was the only country involved with and suffering from the China virus. Well, the world is suffering very badly. But the fact is that many countries are suffering very, very, very badly, and they’ve been suffering from this virus for a long time. We’ve done much better than most and with the fatality rate at a lower rate than most,” Trump continued.

In fact, the U.S. is in the top ten of countries with the highest mortality rates.

Though Trump took a less defensive and sometimes more realistic tone than he has in the past, he repeated that the virus will eventually “disappear” and continued to try to minimize any criticism of his response, touting his handling of the pandemic as a success story.

“My administration will stop at nothing to save lives and shield the vulnerable, which is so important. We have learned so much about this disease, and we know who the vulnerable are, and we are going to indeed shield them,” he continued.