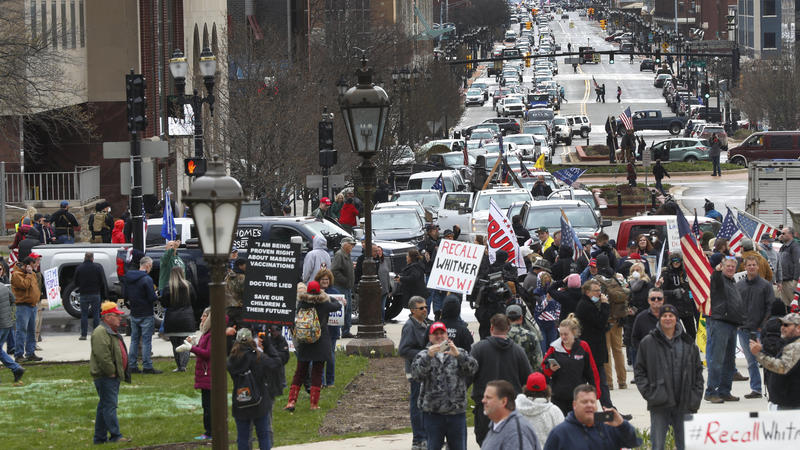 Flag-waving, honking protesters drove past the Michigan Capitol on Wednesday to show their displeasure with Gov. Gretchen Whitmer's orders to keep people at home and businesses locked during the COVID-19 outbreak.
Coronavirus, News, USA, World

WASHINGTON – Multiple states have seen protests as stay-a-home orders meant to curb the spread of the coronavirus continue.

Many protesters were angry about the economic ramifications the restrictions are causing. Economists surveyed by Bloomberg estimate the Labor Department will report Thursday that 5.5 million Americans filed initial applications for unemployment insurance last week.

The protests are occurring as President Donald Trump and governors debate over when states should loosen the restrictions put in place to ensure people practice social distancing.

While discussing whether he or the nation’s governors have the power to lift restrictions, Trump declared at a news briefing Monday, “When somebody’s president of the United States, the authority is total.”

The president’s unprecedented claim of total power met with immediate pushback from Democrats and Republicans, many of them arguing the U.S. Constitution explicitly refutes his claim to absolute authority.

More:Here’s what the Constitution’s 10th Amendment says about Trump’s claim to have total authority over states

More:Stimulus checks are going out to people who have died, what that means for relatives

However, Trump, speaking Wednesday at the White House task force press conference, said recommendations about opening the economy amid the coronavirus pandemic would be released Thursday after a conference call with all 50 governors.

Here are some states that have seen protests thus far:

The demonstration was dubbed “Operation Gridlock” because organizers said they wanted to gain attention by tying up traffic. With the thousands of vehicles, traffic was backed up for more than a mile around the Capitol in several directions, according to Lt. Darren Green of the Michigan State Police.

More:Gov. Whitmer says Capitol protesters put others at risk, may have worsened pandemic

Get the Coronavirus Watch newsletter in your inbox.
Stay safe and informed with updates on the spread of the coronavirus

Delivery: Varies
Your Email
State infection numbers in Michigan appeared to flatten somewhat going into last weekend, but both infection and death numbers were up again on Monday. Health officials have recently expressed cautious optimism but have added that it is too soon to say that the infection has reached its peak in Michigan.

Whitmer said she respects the right to protest, saying it does not violate the stay-at-home order, but she said many of the protesters put themselves and others at risk of contracting COVID-19.

More:Trump threatens to invoke constitutional power to adjourn Congress because of hold-up over nominees

Whitmer declared a state of emergency in Michigan on March 10 and announced a “stay-at-home” order March 23 that directed residents to stay inside, except for essential purposes, and told businesses deemed nonessential to stop calling employees in to work. Last week, she extended that order until May 1, while imposing tougher restrictions on nonessential travel and some retail outlets.

Michigan has the third-highest number of coronavirus deaths in the nation.

Kentucky
About 100 protesters demanded Democratic Gov. Andy Beshear reopen Kentucky and disrupted his televised Wednesday afternoon pandemic update by chanting, blowing horns and shouting into a megaphone outside the window of the briefing room, nearly drowning out his comments to Kentuckians.

Protesters, some of whom appeared to be standing less than 6 feet apart from one another, chanted “we want to work” and “facts over fear.”