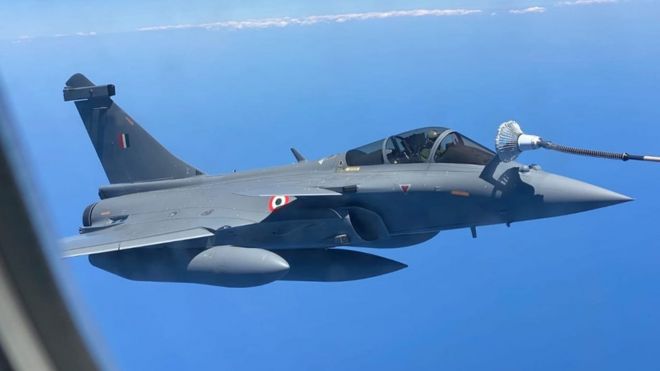 The aircraft are part of India’s deal with France in 2016 to buy 36 warplanes.

Delhi is hoping to modernise its dwindling Soviet-era air force fleet with the induction of Rafale multi-role jets.

But experts warn that these aircraft cannot be used right away in case of a conflict.

Air Marshal (retd) Pranab Kumar Barbora, who oversaw the induction of the Jaguar aircraft fleet, told the BBC that the arrival of the Rafale was a welcome move because “it will significantly enhance the air force’s capability”.

“But it will take a while before these aircraft are fully operational. You have to set up a logistics chain, train technical and ground staff in India,” he said.

He added that it usually takes up to two years before a new squadron is fully functional. The Rafale squadron will be fully operational when it has at least 18 aircraft.

The delivery of the remaining Rafale aircraft is expected to be completed by next year.

The jets, manufactured by French firm Dassault Aviation, took off from France on Monday and landed in the UAE for an overnight stopover. The journey showcased the aircraft’s endurance and mid-air fuelling capability.

The five Rafales escorted by 02 SU30 MKIs as they enter the Indian air space.@IAF_MCC pic.twitter.com/djpt16OqVd

The Rafale is a multi-role aircraft, capable of carrying out long-range missions, including highly accurate sea and ground attacks.

Analysts say the arrival of the jets will boost the morale of the air force, which has been facing a shortage of fighter aircraft. 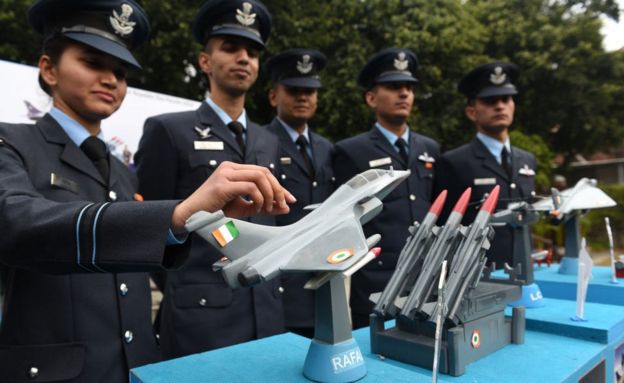 India needs 42 squadrons in the scenario of a two-front war with China and Pakistan. But its squadron strength has been depleted to 31, largely because of ageing Russian aircraft.

The purchase of new fighter jets has been in the making for years. The Bharatiya Janata Party-led (BJP) government began the process in 2000, and its successor, a Congress party-led administration, continued it and issued tenders in 2008 to buy 126 jets.

Dassault was finalised as a supplier in 2012, and the state-run Hindustan Aeronautics Limited (HAL) was selected as partner to produce 108 jets in India.

The deal – from start to finish

2012: Dassault, which submitted the lowest bid, is shortlisted

2014: The deal is put on hold as the BJP’s Narendra Modi becomes PM

But the deal stalled when the two partners couldn’t agree on terms and conditions.

When the BJP returned to power under Mr Modi in 2014, he made the procurement of the jets a priority. But rather than taking the deal forward, he surprised many by ordering 36 jets as part of a new deal in which HAL was not included.

The Indian government says it decided to buy the 36 jets in “fly-away” condition to quickly address the problem of the air force’s depleting strength.

But it’s not clear where India will procure the remaining aircraft it needs in the long run. The air force announced in 2018 that it would be seeking bids for around 110 more fighter jets, but the deal is yet to be finalised.

Businesses ‘have disappeared in the blink of an eye’