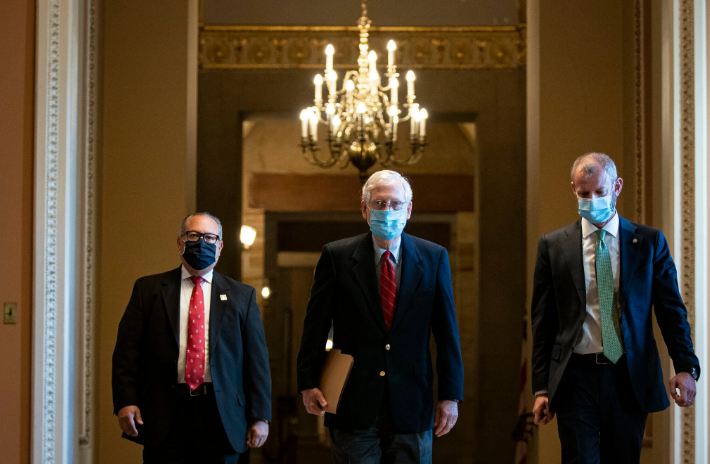 Leading Republicans rallied on Monday around President Trump’s refusal to concede the election, declining to challenge the false narrative that it was stolen from him or to recognize President-elect Joseph R. Biden Jr.’s victory even as party divisions burst into public view.

Senator Mitch McConnell of Kentucky, the top Republican in Congress, threw his support behind Mr. Trump in a sharply worded speech on the Senate floor. He declared that Mr. Trump was “100 percent within his rights” to turn to the legal system to challenge the outcome and hammered Democrats for expecting the president to concede.

In his first public remarks since Mr. Biden was declared the winner, Mr. McConnell celebrated the success of Republicans who won election to the House and the Senate. But in the next breath, he treated the outcome of the presidential election — based on the same ballots that elected those Republicans — as unknown.

“President Trump is 100 percent within his rights to look into allegations of irregularities and weigh his legal options,” said Mr. McConnell, the majority leader. “Let’s not have any lectures about how the president should immediately, cheerfully accept preliminary election results from the same characters who just spent four years refusing to accept the validity of the last election.”

In Georgia, where the continuing vote count showed Mr. Trump losing the state’s electoral votes, Senators David Perdue and Kelly Loeffler — both Republicans now facing January runoffs to keep their seats — took the extraordinary step of calling on the state’s top election official to resign. Declaring Georgia’s handling of the election an “embarrassment” and citing vague “failures” in an echo of Mr. Trump’s evidence-free charges of stolen votes, they said Brad Raffensperger, the Republican secretary of state, had failed the state.

Mr. Raffensperger bluntly rejected their calls, declaring the senators’ claims “laughable” and suggesting that they were merely disgruntled because Mr. Trump might lose and their jobs were on the line.

'Everybody is freaking out': Here's what's at stake if Trump lawsuits drag on

Coronavirus: Did Europe lock down too late amid the COVID-19 outbreak? | Culture Clash