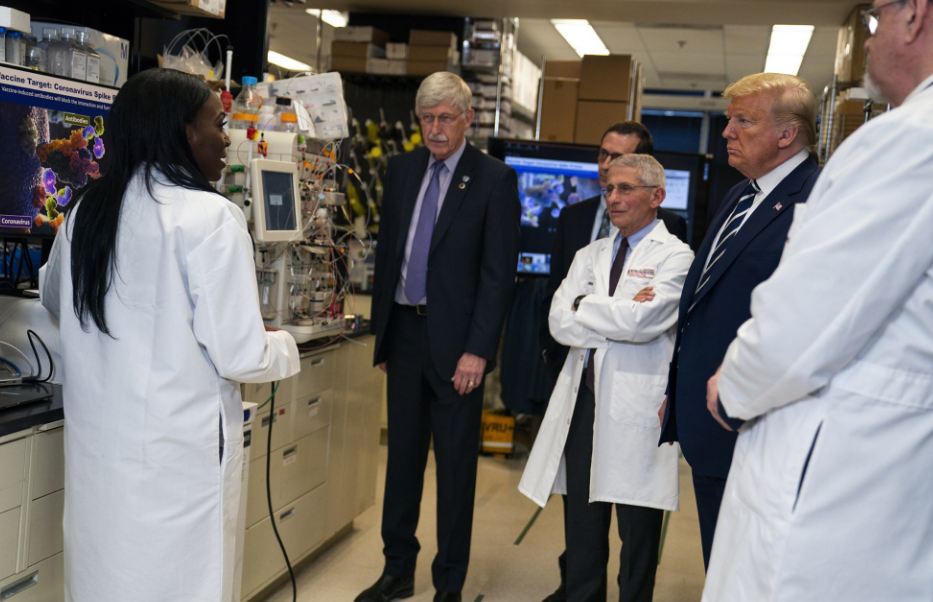 The day President Donald Trump went to the National Institutes of Health for an update on progress toward a vaccine for COVID-19, many of those who sat behind the presidential seal with him were white men well known in the worlds of science, medicine and, now, national anxiety control: vaccine and infectious disease specialists like Dr. Anthony Fauci, Dr. John Mascola, Dr. Barney Graham and the man who led the human genome project, Dr. Francis Collins, director of the NIH. Sitting next to Graham was Kizzmekia Corbett, an NIH research fellow.

In 2003, Fauci said at the event, NIH scientists managed to identify SARS and get a vaccine to stage-one clinical trials in 20 months. Now a team of scientists led by Corbett, 34, was poised to move to first-stage trials for a coronavirus vaccine — this time, in about two months.

That was March 3. Just 122 people had tested positive for the coronavirus in the U.S. Reporters stationed around the edges of the room asked the president about virus-related travel bans and his Super Tuesday predictions. No one asked Corbett — whom Collins had just described as a “wonderfully talented young scientist in our midst,” as well as the only woman and black person at the table — a single thing.

Just 13 days later, Corbett’s team began first-stage clinical trials of a COVID-19 vaccine, the first of its kind in the world and the fastest progress ever toward a possible vaccine for a novel pathogen. At least 40 distinct groups of researchers in China, Germany, the U.S. and other countries soon followed. But if Corbett’s team is successful — meaning phase one, two and three clinical trials prove the team’s work has produced a safe, working vaccine — something to prevent infection with the coronavirus could be ready for use in doctors’ offices by early to mid-2021. COVID-19 could become a preventable disease.

“There was, and is, already a fair amount of pressure,” Corbett said. “A lot of people are banking on us or feel that we have a product that could, at least, be part of the answer this world needs. And, well, whew, just saying that out loud is not easy.”

There are other statements that Corbett expresses with ease, however. Take, for instance, when Graham met her 12 years ago, when she was an undergraduate doing summer work at the NIH’s Vaccine Research Center, and asked her what she ultimately wanted to do with her life.

“She said, ‘I want your job,'” Graham recalls. “From the very beginning, she was really pretty bold in her aspirations. And I, if I recall correctly, I was just glad to hear help was coming.”

Corbett was clear that her route included getting a doctorate and ideally working on rapid vaccine development — an aria to Graham’s ears. Rapid vaccine development, particularly for novel pathogens with the potential to create pandemics but not big corporate profits, almost always requires singular focus and scientists willing to sacrifice.