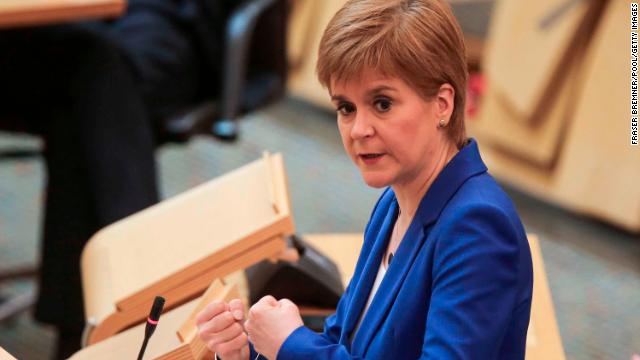 Scotland’s First Minister Nicola Sturgeon has warned that coronavirus still poses a “significant risk,” calling on citizens to not become complacent as the UK government prepares to lift some lockdown restrictions in England on Monday.

“We have got to be very cautious. The virus has not gone away, there is still a significant risk that it could run out of control again,” Sturgeon said Sunday during an interview with Sky News.

“In Scotland, we are moving very slowly, very cautiously. We’ve just gone into Phase 1 of our route map out of lockdown, and that expressly recognizes that, in that phase, there is a significant risk that the epidemic is not fully contained,” she added.

On Thursday, UK Prime Minister Boris Johnson announced that Britain would begin the gradual process of easing the lockdown restrictions on Monday, despite concerns expressed by members of SAGE, the government’s scientific advisory board. Some fear transmission rates remain too high and that the government’s new test and trace system is still being rolled out.

“We’re entering a period where there is a risk of increasing transmission, but we don’t have that safety net yet fully in place,” Professor Peter Horby said during an interview with BBC Radio 4 on Saturday.

During her interview with Sky News, Sturgeon urged citizens in Scotland to continue to follow the guidance issued by the government, including continued social distancing measures.

“The virus has not gone away, and it’s important that we do not become complacent,” she added.

Bars, gyms and restaurants in South Korea to keep a QR-code log of customers