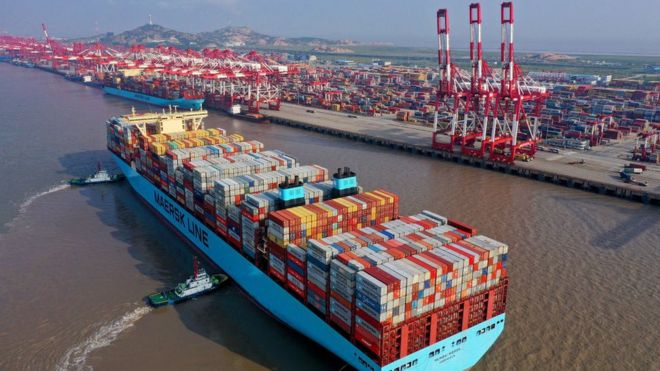 With the world in the midst of the coronavirus pandemic, the shipping industry is already feeling the impact as the global economy heads into a deep recession.

Hundreds of ship sailings have been cancelled as first ports in China, and then across the globe, have seen trade fall away – with millions of workers and consumers in lockdown.

Caught in the centre of this have been the world’s 1.6 million seafarers, on 50,000 tankers and cargo carriers. Many of them are unable to leave their ships, or find themselves stuck in hotels without pay and unable to get flights home.

Every month, 100,000 merchant mariners come to the end of their contracts on a their ships and need to be flown home. But the pandemic has halted this. 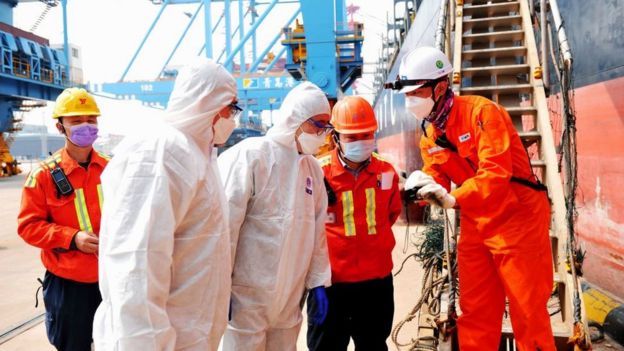 “Working at sea is often described as similar to being in prison, except there is no TV,” says former ship’s navigator Nick Chubb.

“Though my experience was usually positive, a feeling of deep fatigue sets in towards the end of a contract. I once had a four-month contract on an oil tanker extended by three weeks, and found it incredibly difficult to deal with.

“Some of these seafarers have spent nine months away from their families already. And it’s not looking particularly likely they’ll be able to go home any time soon,” adds Mr Chubb, who is now a director for the maritime technology intelligence platform Thetius.

The world’s biggest shipping firm, AP Moller-Maersk, is one of those which has halted its crew changes, and says its done so to protect them, by lessening the number of social interactions they need to have.

It adds that “the rapid changes to global travel poses a risk of stranding seafarers in locations from where they are unable to leave, or get sufficient assistance”.

Yet even before the coronavirus outbreak, the industry was grappling with major issues.

First, the need to move to cleaner fuels because of the introduction of the 2020 sulphur emissions cap by the International Maritime Organization.

Second, the fallout from the US-China trade war, and the failure of Washington and Beijing to implement the first phase of their trade agreement.

“Shipping lines have had a very hard time making money in the past ten years,” says Alan Murphy, chief executive of analysts Sea-Intelligence in Copenhagen.

For example, for a $100 (£80) pair of trainers, the cost of ocean transport will be a fraction of that – just 10c. This makes the distance that goods travel to market irrelevant in cost terms. And it is why China, with its low labour costs, has become the world’s main manufacturer. 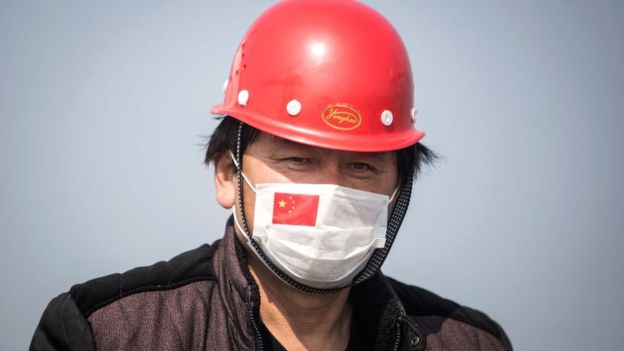 Peter Sand, chief shipping analyst with Bimco, the world’s largest international shipping association, warned at a recent webinar that 2020 could become increasingly harsh for the industry.

Faced with the rippling disruptions to supply and demand around the globe, shipping firms have been scaling back operations. So far, 384 sailings have been cancelled, and the first half of 2020 could see a 25% fall in shipping, with a 10% drop for the year overall, says Sea-Intelligence.

Chinese ports have resumed sailings in April, but many ports serving key consumer markets are still operating well below capacity.

The industry has not yet had to lower prices, but if shipping firms are forced to do so, and freight rates fall by 20% – as they did after the 2008 financial crisis – and were shipping volumes to remain 10% lower, “we could see operating losses of some $20-23bn”, says Mr Murphy.

“That would wipe out the shipping firms’ last eight years’ worth of profits,” he adds. 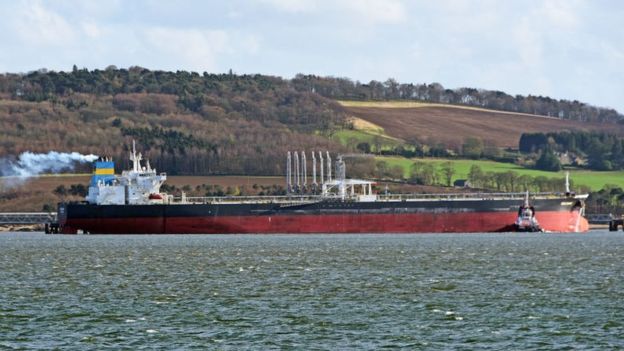 There are a lot of unknowns in the preceding sentences, and Sea-Intelligence stresses it is not yet clear how long it will take for fractured global supply chains to get back to normal once lockdowns are ended.

For consumers, there could well be periodic shortages to come, says Jody Cleworth, of consultants Marine Transport International.

“In developing nations like South Africa there’s an almost complete shutdown in exports, whereby only critical goods are moving through ports. So the seasonal goods we expect in Europe in summer would be limited from such countries.

“For example, charcoal for your summer barbecue. At the moment those containers are not being moved out of South Africa, so they will not be arriving in the UK for their intended dates,” he says.

But there is one exception to this gloom: the oil tanker sector. Demand for oil tankers has been rising following the oil price falls, which have sent the tanker sector “sky-high”, says Nick Chubb of Thetius.

“There are ships that are being chartered now for $230,000 a day as offshore floating storage for when the oil prices recover. It’s almost a tale of two industries,” he says.

But given the impact of Covid-19 on economic activity, energy demand in 2020 is likely to be substantially lower, and it is possible these tankers may be storing oil for a while to come.