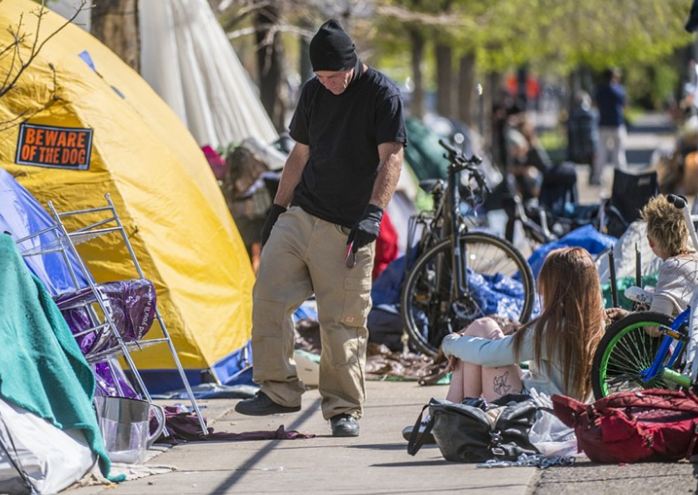 On April 23, a coalition of Denver service providers pitched the idea of establishing a temporary safe site where up to 100 homeless individuals could set up their tents to the Hancock administration.

The site would have bathrooms, sinks and even COVID-19 testing to ensure that people are staying safe during the pandemic. It would be an alternative for homeless individuals who are reluctant to enter into the large shelters at the National Western Center and Denver Coliseum but not supposed to camp on city sidewalks, where many tents have sprung up over the past two months. Similar projects have been launched in such places as Tampa Bay, Portland and Aspen to help homeless individuals.

But over two weeks later, the coalition is still waiting for an answer from the Hancock administration. And now they’re ready to move ahead with the project anyway.

RELATED STORIES
Denver Appeals Judge’s Decision Declaring Camping Ban Unconstitutional
Safe Parking Sites Could Steer Homeless to a Better Future
Denver Service Providers Pitching “Safe Outdoor Space” for Homeless
“We’re going to go back to the city and say, ‘Listen, we have all of this covered, where do you see yourself helping?'” says Kathleen Van Voorhis of the Interfaith Alliance of Colorado, one of the groups pushing the proposal.

While the initial pitch asked for financial assistance from the city, its proponents say they’ve already locked up enough commitments from donors to fund the entire venture. They’ve also identified potential sites for the safe space, and are in conversation with landowners.”At this point, we don’t expect that the city is going to provide any resources toward this. Our hope is that they would provide some regulatory pathway toward establishing the space,” explains Cole Chandler, director of the Colorado Village Collaborative, which is also behind the initiative.

Van Voorhis and Chandler expect to speak again with city officials early next week. They’ll be joined on a phone call with staffers from the St. Francis Center day shelter and the Salvation Army, the two organizations that would handle outreach and case management at the safe site.

The initiative has support from all the major homeless-service providers in Denver. It also has support from a majority of Denver City Council; eight councilmembers, plus a handful of state legislators from Denver, sent a letter to Mayor Michael Hancock on April 24 asking him to approve the plan.

“The Temporary Safe Outdoor Space could serve 50 to 100 individuals at one time, with a likely greater reach as individuals are screened and referred to other medical care, hotels, or even housing solutions making space for new occupants. That is 50, 100 or more lives that can be protected directly. Reduced transmission will matter not only to them, but to the 4+ individuals anyone with the virus could infect,” the letter states.

Although the Hancock administration has not officially responded to the proposal, during an April 24 press conference, the mayor expressed skepticism about the idea.

But now the city appears to be shifting its stance, pointing to what it’s done rather than what might be prohibited. “During this pandemic, our focus in Denver has been working to connect people to vital services and support. We’ve been working extensively with our local service providers and have been able to open two auxiliary shelters, both of which provide guests with at least 60 square feet of space each, room to have meals and relax while social distancing, and greater access to medical care. We have also established a network of activated respite hotel rooms to support those who are medically required to isolate,” says Erika Martinez, a spokesperson for the city.

Mitch McConnell: Obama 'should have kept his mouth shut' instead of criticizing US coronavirus response

People with coronavirus dying 10 years earlier than they would have naturally: Study