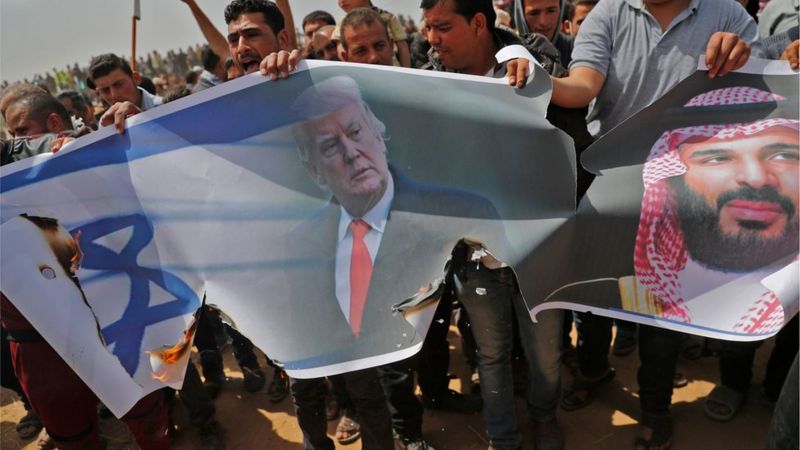 Will they or won’t they? It’s a question on a lot of people’s minds in the Middle East right now.

Are Saudi Arabia’s rulers, historically critics of Israel and its treatment of the Palestinians, finally edging closer to normalising relations with the country often dismissively referred to in the past by Arab media as “the Zionist entity”?

“This low level of discourse is not what we expect from officials who seek to gain global support for their cause,” said Prince Bandar in the three-part interview.

“Their [Palestinian leaders’] transgression against the Gulf states’ leadership with this reprehensible discourse is entirely unacceptable.”

Palestinian leaders initially described the UAE and Bahrain’s normalisation of relations with Israel as a “betrayal” and “a stab in the back”.

Prince Bandar, who spent a remarkable 22 years as Saudi ambassador to Washington and was so close to former US President George W Bush that he was often nicknamed Bandar Bin Bush, spoke of “the historic failures” of the Palestinian leadership. It had taken Saudi support for granted, he told his audience.

Although he made a point of calling the Palestinian cause a “just” one, he placed equal blame on Israel and the Palestinian leadership for failing to reach a peace deal after so many years.

How, he argued, referring to the split between the Palestinian Authority, which governs in the West Bank, and the Palestinian Islamist movement Hamas, which holds power in Gaza, can Palestinians possibly reach a fair deal when their leaders cannot even agree among themselves?

Such words, said a Saudi official close to the ruling family, would not have been aired on Saudi-owned television without the prior approval of both King Salman and Crown Prince Mohammed Bin Salman.

By choosing Prince Bandar, a veteran diplomat and longstanding pillar of the Saudi royal establishment to deliver them, said the official, it was the clearest sign yet that the Saudi leadership may be preparing its population for an eventual deal with Israel.

Historical suspicions
It does seem that both by Prince Bandar’s words and by quietly endorsing the recent UAE and Bahraini normalisations with Israel, the Saudi leadership is moving rather faster towards rapprochement with Israel than much of its own population.

For so many years, especially in the more rural, isolated corners of the kingdom, Saudis have been accustomed to viewing not just Israel as the enemy, but also all Jewish people.

I remember in one mountain village in Asir province a Saudi telling me in all seriousness that “on one day of the year Jews drink the blood of babies”. 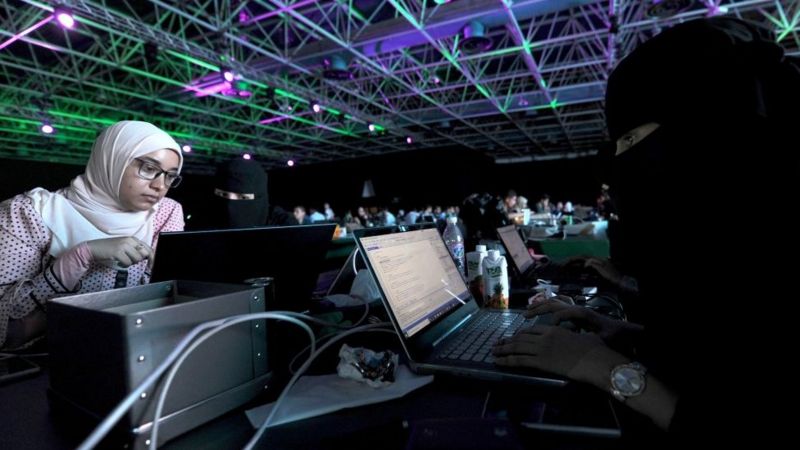 Thanks to the internet and satellite TV those kinds of conspiracy theories are rarer in the kingdom now; Saudis spend a huge amount of time online and are often better informed about world affairs than people in the West.

Yet given the xenophobia and historical suspicion of outsiders that exist among certain parts of the Saudi population it will take time to turn around this metaphorical tanker in midstream, which is why Saudi Arabia has not rushed to follow its Gulf neighbours in forging a historic deal.

Saddam calamity
Saudi Arabia and the Gulf states’ history of relations with the Palestinians is a chequered one.

Gulf governments have nominally supported the Palestinian cause, both politically and financially, for decades. 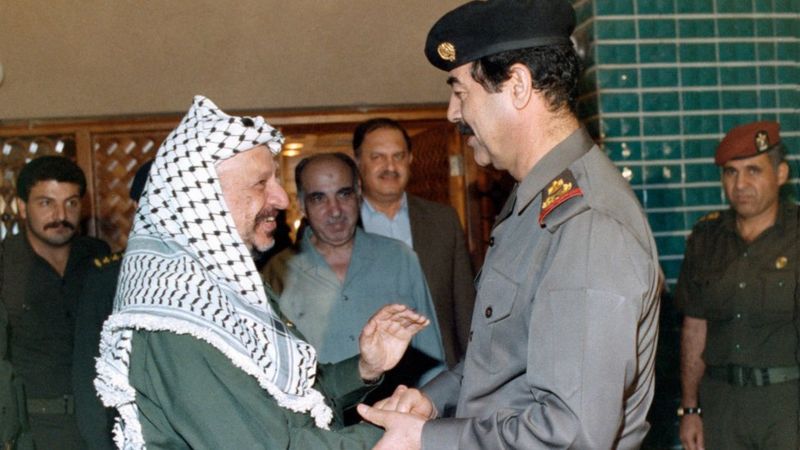 But when Palestinian leader Yasser Arafat sided with Iraqi President Saddam Hussein over his invasion and occupation of Kuwait in 1990 they felt an enormous sense of betrayal.

After the US-led Operation Desert Storm and the liberation of Kuwait in 1991, that country expelled the entire expatriate community of Palestinians, replacing them with thousands of Egyptians.

Visiting a traumatised Kuwait City that year, I noticed some Arabic graffiti scrawled on the side of an abandoned pizza restaurant.

“Al-Quds da’iman lil’Sihyouneen, w’ana Kuwaiti’, it read. “Jerusalem is the eternal home of the Zionists, and I’m a Kuwaiti [writing this]”.

It took a long time for the region’s older rulers to get over Arafat’s “betrayal”. Ironically perhaps, someone who did more than most to heal the rifts across the Arab world was Kuwait’s own late Emir, Sheikh Sabah al-Ahmad al-Sabah, who died last month, aged 91.

Saudi peace plan
Saudi Arabia does have history when it comes to holding out an olive branch to Israel.

In March 2002 I was at the Arab Summit in Beirut, where a slight, urbane, balding man with perfect English was doing the rounds, explaining something called the Crown Prince Abdullah Peace Plan. 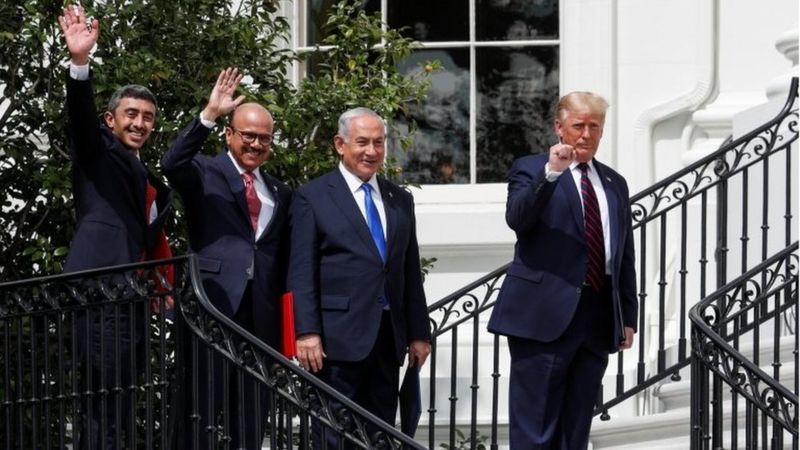 Essentially, it offered Israel full normalisation with the entire Arab world in exchange for a withdrawal from all occupied territories, including the West Bank, Gaza Strip, Golan Heights and Lebanon, as well as giving the Palestinians East Jerusalem as their capital and reaching a “just solution” for Palestinian refugees who, in the Arab-Israel war of 1948-49, had been expelled or driven from their homes in what became Israel.

The plan received international support and it briefly put Israel’s Prime Minister Ariel Sharon on the spot. Here, at last, seemed a chance to end once and for all the historic Arab-Israeli conflict.

But just before the plan was published, Hamas bombed an Israeli hotel in Netanya, killing 30 people and wounding more than 100. All talk of peace was off the table.

Fast forward 18 years and the Middle East has moved on in so many ways, although the Palestinians have yet to achieve independent statehood and Israeli settlements considered illegal under international law continue to encroach on Palestinian land in the West Bank.

The UAE, Bahrain, Jordan and Egypt have now all made their peace with Israel and have full diplomatic relations.

In fact, unlike the strained “cold peace” that Jordan and Egypt have with Israel, the two Gulf states are accelerating their ties with Israel.

Within days of Bahrain signing the Abraham Accord at the White House, Israel’s spy chiefs were visiting Manama, talking intelligence co-operation on their mutual adversary, Iran.

Testing the water
So how do Israeli officials feel about a potential future normalisation with Saudi Arabia?

They have certainly watched Prince Bandar’s interview with interest but have so far declined to comment directly.

Instead, a spokesman for the Israeli embassy in London said: “We hope that even more countries will recognise the new reality in the Middle East by joining us on the road to reconciliation.”

Saudi Arabia has traditionally moved slowly and with great caution when it comes to changes of policy, testing each move before committing itself.

But the arrival on the scene of the maverick Crown Prince Mohammed Bin Salman has changed all that.

Women can now drive, there is public entertainment, and the country is slowly opening up to tourism.

So a Saudi-Israeli peace deal, while not necessarily imminent, is now a real possibility.